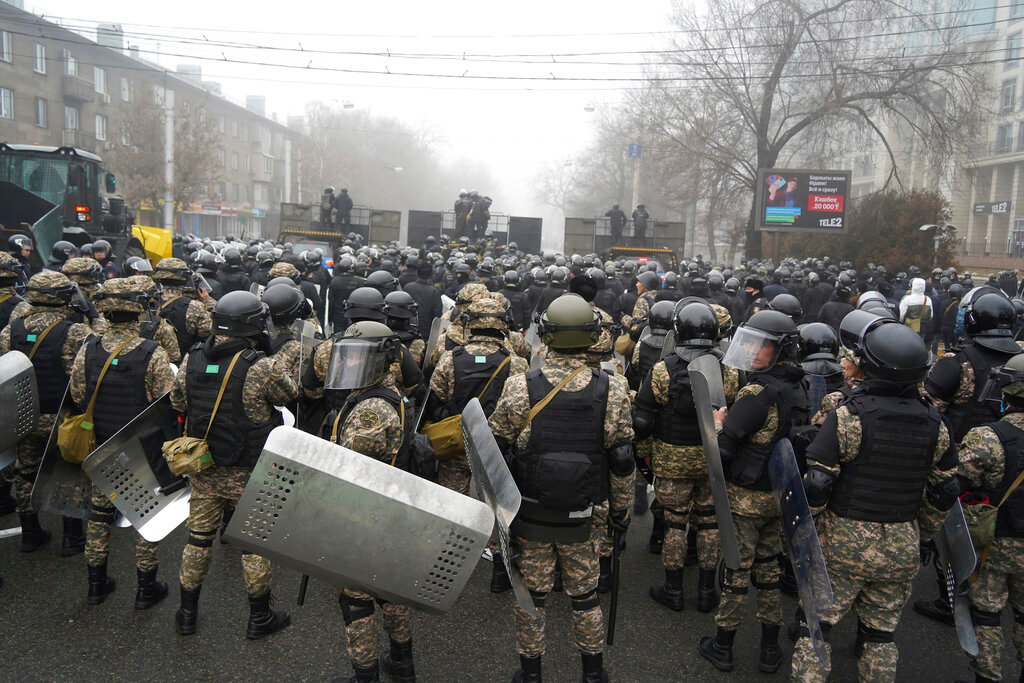 Riot police block a street to prevent demonstrators during a protest in Almaty, Kazakhstan, Wednesday, Jan. 5, 2022. Demonstrators denouncing the doubling of prices for liquefied gas have clashed with police in Kazakhstan's largest city and held protests in about a dozen other cities in the country. (AP Photo/Vladimir Tretyakov)
Vladimir Tretyakov
Posted Thursday, January 6, 2022 2:36 pm
By JIM HEINTZ, Associated Press

Despite the severe response by authorities, protesters took the streets again in the country’s largest city, Almaty, a day after breaking into the presidential residence and the mayor’s office there. Police were also out in force, including in the capital of Nur-Sultan, which was reportedly quiet, and Russian troops were on their way.

Video from the Russian news agency Tass showed police firing intensely on a street near Republic Square, where demonstrators had gathered, though they could not be seen in the footage. Late Thursday, Tass said protesters had been swept from the square but that sporadic gunfire in the area continued.

Earlier, Russia’s Sputnik news service reported that shots were fired as police surrounded one group of about 200 protesters in the city.

In the unrest on Wednesday, “dozens of attackers were liquidated,” police spokeswoman Saltanat Azirbek told state news channel Khabar-24, using a term common to describe the killing of people thought to be extremists by law enforcement. Twelve police officers were killed and 353 injured, according to city officials cited by the channel. The Interior Ministry said 2,000 people have been arrested.

Tens of thousands of people, some reportedly carrying clubs and shields, have taken to the streets in recent days in the worst protests the country has seen since gaining independence from the Soviet Union three decades ago. Although the demonstrations began over a near-doubling of prices for a type of vehicle fuel, their size and rapid spread suggest they reflect wider discontent in the country that has been under the rule of the same party since independence.

The government on Thursday announced a 180-day price cap on vehicle fuel and a moratorium on raising utility rates — an attempt to address the economic issues that catalyzed the protests, though it was unclear what, if any, effect the moves would have.

The president has vacillated between attempts at mollifying the protesters, including accepting the resignation of his government, and promising harsh measures to quell the unrest, which he blamed on “terrorist bands.”

Worries that a broader crackdown could be on the horizon grew after he called on a Russia-led military alliance for help. Severe interruptions to internet service and cellphone service also raised concern and made it difficult — sometimes impossible — for news of what was happening inside Kazakhstan to get out.

The airports in Almaty and one other city have also been shut.

The military alliance, the Collective Security Treaty Organization, said early Thursday that it would send peacekeeper troops to Kazakhstan at Tokayev's request.

The operation is the first military action by the CSTO — an indication that Kazakhstan's neighbors, particularly Russia, are concerned that the unrest could spread.

Russia and Kazakhstan share close relations and a 7600-kilometer (4700-mile) border, much of it along open steppes. Russia's manned space-launch facility, the Baikonur Cosmodrome, is in Kazakhstan.

The size and duties of the force have not been specified. Russia has already begun sending forces, according to the CSTO, which also includes Kazakhstan, Armenia, Belarus, Kyrgyzstan and Tajikistan. But Kyrgyzstan's presidential spokesman, Erbol Sutanbaev, said his country's contingent must be approved by parliament and said that the troops would not take actions involving demonstrators.

It was not immediately clear if any of the Russian forces had arrived in Kazakhstan.

France condemned the violence and called for “de-escalation and responsibility” from all parties involved, including the CSTO.

China is also likely to be concerned. Kazakhstan shares a 1,800 kilometer (1,000 mile)-long border with China’s Xinjiang region, where Beijing has launched an all-out campaign to quash separatist sentiment among Muslim minority groups who share cultural, religious and linguistic links with the peoples of Central Asia.

However, at a daily briefing Thursday, Chinese Foreign Ministry spokesperson Wang Wenbin appeared to dismiss any possibility of China becoming involved in the current crisis, in line with Beijing strict official non-interventionist policy.

“What is happening in Kazakhstan is the country’s internal affair (and) we believe that the Kazakh authorities can solve the issue properly,” he said.

Tokayev has imposed a two-week state of emergency for the whole country, including an overnight curfew and a ban on religious services. That is a blow to Kazakhstan's sizable Orthodox Christian population who observe Christmas on Friday.

Of the five Central Asian republics that gained independence following the dissolution of the Soviet Union, Kazakhstan is by far the largest and the wealthiest, spanning a territory the size of Western Europe and sitting atop colossal reserves of oil, natural gas, uranium and precious metals. In addition to its long border with Russia, it also shares one with China, and its oil and mineral wealth make it strategically and economically important.

But despite Kazakhstan’s natural riches and a solid middle class, financial hardship is widespread, and discontent over poor living conditions is strong in some parts of the country. Many Kazakhs also chafe at the dominance of the ruling party, which holds more than 80% of the seats in parliament.

The protests appear to have no identifiable leader or demands. Much of the anger displayed in recent days was directed not at Tokayev, but at Nursultan Nazarbayev, the country’s first president who continued to wield enormous influence after his 2019 resignation. Protesters shouted “Shal ket!” (“Old man go”), an apparent reference to Nazarbayev, who dominated Kazakhstan’s politics and whose rule was marked by a moderate cult of personality.

At the start of the year, prices for the fuel called liquefied petroleum gas roughly doubled as the government moved away from price controls as part of efforts to move to a market economy.

The price cap for LPG announced by the government Thursday is 75 tenge (17 cents) per liter; at the start of the year, the average price was about 120 tenge (27 cents).

Rescuers to move whale stranded in French river to saltwater