Faith based adoption bill passed in the Senate

Senator William Ligon of Brunswick responds to media questions after the vote on Senate Bill 375, also known as the Keeping the Faith and Adoption Care Act. MIKE GRIFFIN/Special

The Senate approved the measure by a vote of 35-19. Senator William Ligon of Brunswick sponsored the bill, explaining, "The goal is to open as many doors as possible for those children that are in need of homes, and this bill will do that."

Mike Griffin, Georgia Baptist Public Affairs Representative at the Capitol, interviewed Senator Ligon after the vote. Senator Ligon stated, "I think went well; and when it passes the House and hopefully the governor signs it our faith based agencies will be able to continue to offer their services to children in foster care homes and place them up for adoption."

Said Griffin, "This will simply continue the practice that is going on now, but it ensures that we are not going to have any problem in the future."

Ligon responded, "Churches and people of faith have been providing children with homes for centuries, before the states got into the business. This bill continues that tradition."

The Brunswick senator stressed that SB 375 would encourage other faith based adoption agencies to locate in Georgia. He also stated that there are now three or four adoption agencies in Georgia that cannot do business with the state because of the way the contract is written.

The interview indicated that there have been problems in other states where adoption agencies have either had to close their doors or violate their faith and so they have closed their doors. 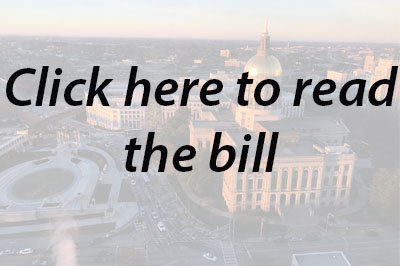 Opponents of the bill claim that the legislation would discriminate against same sex couples qualifying as adoptive parents and that it could hamper Georgia's chances of landing the Amazon's second headquarters.

Griffin testified that the bill is extremely good for children and families and not about discrimination. The Georgia Baptist Public Affairs representative explained, "If there is any discrimination it is about faith based agencies not being discriminated against in the future.

"Senator Ligon is a godly man and we are grateful for the support his bill has received today," added Griffin.

In a prepared statement Griffin explained, "The Georgia Baptist Mission Board supports SB 375: 'Keeping Faith in Adoption and Foster Care Act,' because it ensures that the State of Georgia will continue to respect the special missions of faith-based child-placing agencies.

"Georgia has always recognized the importance of faith-based agencies and their mission statements. The State has a constitutional duty to be proactive in protecting First Amendment freedom for religious persons and their institutions.

"We know already of at least three States (Illinois, Massachusetts, and California) and Washington, D.C., where faith-based child-placing agencies have shut down because of State policies that required them to compromise their sincerely held religious beliefs regarding the biblical view of the family.

"We must all see that protecting the conscience rights and religious liberty of private adoption and foster-placement providers takes nothing away from others. A diverse range of provider options exist for anyone who is legally able and willing to adopt or provide foster care. Ensuring a diversity of private providers and their ability to operate according to their values-and with families who share those values-makes it more likely that the greatest possible number of children will become part of permanent, loving families. We believe this is something that all Georgians want."

A vote will now have to take place in the House for this legislation to make it to the governor's desk. Please contact your House representative and ask for their support. Visit www.mvp.sos.ga.gov to find your House member and contact information. Also, pray for its passage.