Feds: Gopher tortoise, Georgia's state reptile, not threatened over most of its range 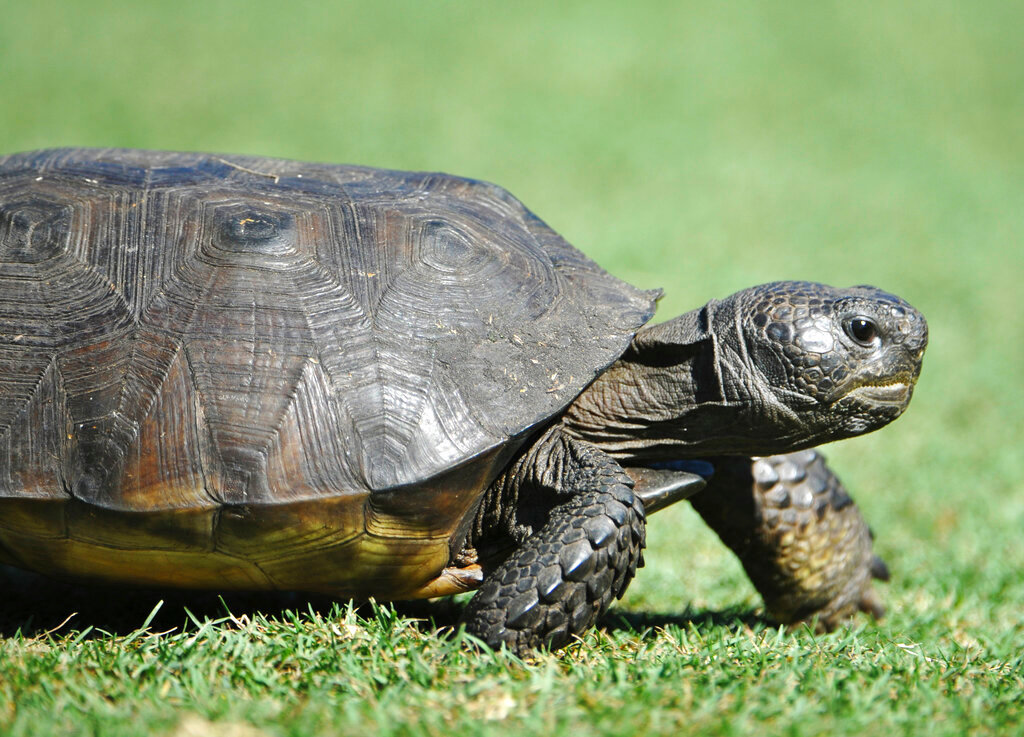 A gopher tortoise ambles along a tee box on Sept. 21, 2014 in Ponte Vedra Beach, Fla. (Will Dickey/The Florida Times-Union via AP)
Posted Tuesday, October 11, 2022 10:09 am
By JANET McCONNAUGHEY, Associated Press

NEW ORLEANS (AP) — Gopher tortoises — burrowers whose extensive homes shelter many other animals — are generally doing well and need federal protection only in the small area where they were declared threatened 35 years ago, the government said Tuesday.

Thanks to extensive conservation work and recently discovered populations, Georgia's state reptile is no longer a candidate for protection in the bulk of its range: Florida, south Georgia, most of coastal Alabama, and a sliver of South Carolina, the U.S. Fish and Wildlife Service said.

The agency said small, disconnected populations remain threatened in southeastern Mississippi and bits of Louisiana and Alabama, which together make up about 12% of the tortoise's range.

“Efforts to improve conditions for the gopher tortoise have been effective, and it is important that scientists, experts and wildlife professionals continue to strategically use our best resources to help recover the gopher tortoise where it’s most vulnerable,” Leopoldo Miranda-Castro, the service’s southeastern regional director, said in a news release.

Although gopher tortoises average 9 to 11 inches long, researchers have found burrows up to 40 feet long. More than 360 kinds of animals have been found in occupied or abandoned burrows; the 60 vertebrate species include dusky gopher frogs, eastern indigo snakes, and burrowing owls.

Logging and development are two of the gopher tortoise's biggest threats. It lives in sandy upland forests with widely spaced trees, including longleaf pine savannas that once covered an area larger than Germany. Those once-extensive forests are now down to about 5% of that area.

Longleaf pine restoration, however, is among many programs that have helped gopher tortoises, the Fish and Wildlife Service said.

Many populations in the nearly 109,700-square-mile eastern area are in good condition despite threats that include climate change and sea-level rise as well as habitat loss and fragmentation, the federal agency said.

“Future projections ... show that many healthy populations will remain across the range,” it said.

In the 15,000-square-mile western section, though, populations are smaller and reproduction is lower, and they have a low ability to rebound from population or environmental changes, the agency said.

The Fish and Wildlife Service said gopher tortoises currently live on about 161 square miles of the area and are threatened — not endangered.

“Because gopher tortoises are long-lived, they will remain on the landscape for several decades despite current and ongoing threats,” it said.