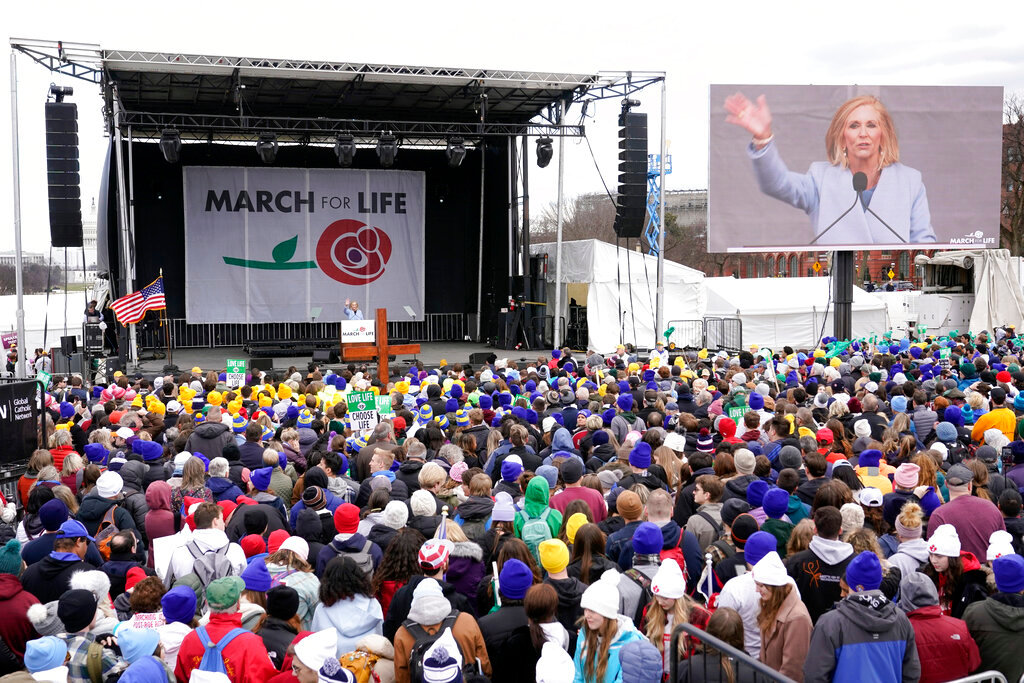 WASHINGTON (AP) — Participants in the first March for Life since the U.S. Supreme Court overturned Roe v. Wade urged Congress to do nothing to impede laws curtailing abortions in individual states, including Georgia.

Thousands of pro-life advocates spread across a section of the National Mall for the annual march for Life, the Capitol Building in sight from a distance.

“For nearly 50 years, you have marched to proclaim the fundamental dignity of women, of their children and of life itself," said Mississippi Attorney General Lynn Fitch, whose office argued the case that overturned Roe v. Wade. "But this year is different.“

“The struggle has changed,” said North Carolina resident Marion Landry who has been a regular at the event in recent years. “In some ways you don’t have that central focus anymore. Now it’s back to the states.”

Mike Miller, a Boston resident who has attended at least 15 such marches over the years, said work remains to be done even with Roe v. Wade overturned.

“This is only one step and in the next step, education becomes the biggest thing,” Miller said.

From the stage, in a move to show that the anti-abortion movement crosses political parties and racial groups, Treneé McGee, a Black Democratic state representative from Connecticut, addressed the crowd.

“I stand in place of the pro-life Black women across the globe who are suffering in silence,” she said as the crowd roared.

House Speaker Kevin McCarthy offered support in a statement pledging that the new Republican majority will stand with abortion-rights opponents.

“While others raise their voices in rage and hatred, you march with prayers, goodwill, fellowship, compassion, and devotion in defense of the most defenseless in this country,” McCarthy said.

Jeanne Mancini, president of the March for Life Education and Defense Fund, said the march is “a somber reminder of the millions of lives lost to abortion in the past 50 years, but also a celebration of how far we have come and where we as a movement need to focus our effort as we enter this new era in our quest to protect life.”

Some movement leaders also hope to plant seeds in Congress for a potential federal abortion restriction down the line.

Marjorie Dannenfelser, president of SBA Pro-Life America, said she envisions an eventual “federal minimum standard” cut-off line such as 13 weeks of pregnancy after which abortion would not be permitted in any state. Dannenfelser's scenario would still leave individual states free to impose their own, stricter measures, including a total ban.

“We know it’s not going to happen this session, but this is the beginning,” Dannenfelser said. “It's (Congress') responsibility to listen to the will of the people.”

In the absence of Roe v. Wade's federal protections, abortion rights have become a state-by-state patchwork.

Elective abortions also are unavailable in Wisconsin, due to legal uncertainties faced by abortion clinics, and in North Dakota, where the lone clinic relocated to Minnesota.

Bans passed by lawmakers in Ohio, Indiana and Wyoming have been blocked by state courts while legal challenges are pending. And in South Carolina, the state Supreme Court on Jan. 5 struck down a ban on abortion after six weeks, ruling the restriction violates a state constitutional right to privacy.