First ship with Ukraine grain cleared to sail on to Lebanon 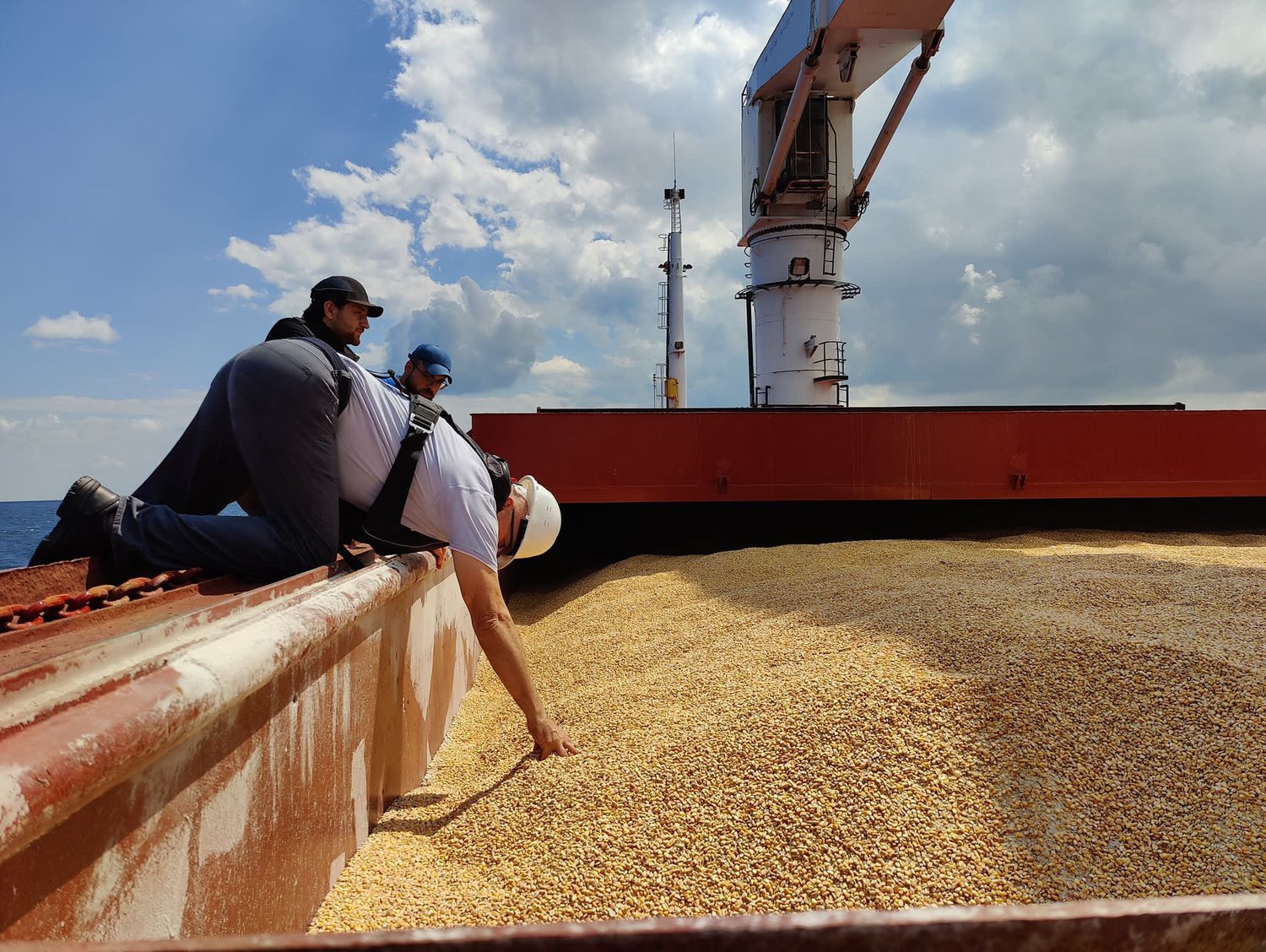 An inspector reaches into the Razoni's open hold and touches the grain while it is anchored at the entrance of the Bosphorus Strait in Istanbul, Turkey, Wednesday, Aug. 3, 2022. (Photo/Turkish Ministry of National Defense) 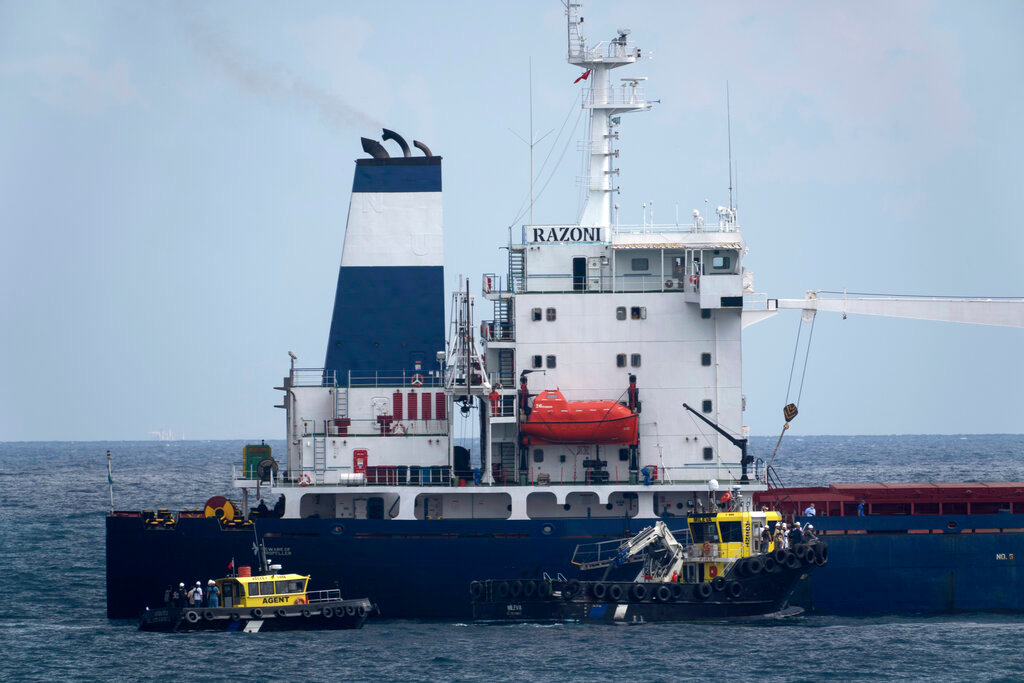 Russian, Ukrainian, Turkish and U.N. officials arrive to the cargo ship Razoni for inspection while it is anchored at the entrance of the Bosphorus Strait in Istanbul, Turkey, Wednesday, Aug. 3, 2022. (AP Photo/Khalil Hamra)
Previous Next
Posted Wednesday, August 3, 2022 9:08 am
By ZEYNEP BILGINSOY, Associated Press

ISTANBUL (AP) — The first grain ship to depart Ukraine under a wartime deal entered the Bosporus Strait on the way to Lebanon after its cargo was checked and approved Wednesday, Turkish and Ukrainian authorities said.

An inspection team spent about 90 minutes conducting checks aboard the Sierra Leone-flagged Razoni, which was carrying Ukrainian corn and anchored off Istanbul, Turkey's defense ministry said.

The team included officials from Ukraine, Russia, Turkey, and the United Nations, the parties to the agreement struck last month to create safe shipping corridors for exporting Ukraine's agricultural products as Russia's invasion of its neighbor continues.

Pictures tweeted by the Turkish Ministry of National Defense showed an inspector reaching into the Razoni's open hold and touching the grain. The Razoni’s horn rang out as the inspectors left the ship. The detailed mechanics of the inspection were not explained.

The Razoni, which the United Nations says is carrying 26,527 tons of corn, set sail Monday from Odesa on Ukraine’s Black Sea coast. From Istanbul, it is on a voyage to cross the Bosporus Strait, a 19-mile scenic waterway connecting the Black Sea to the Sea of Marmara, before sailing on to Lebanon, its final destination.

The inspectors, some wearing white helmets, headed out to the Razoni in two boats, escorted by the Turkish coast guard. Turkish media said there were about 20 inspectors.

The checks are intended to ensure that outbound cargo vessels are bearing only grain, fertilizer or related food items and not any other commodities, and that inbound ships are not carrying weapons.

Ukraine’s Ministry of Infrastructure confirmed the Razoni had passed the inspection. It said 17 other vessels “are loaded and are awaiting permission to leave” Ukrainian ports.

Some 27 vessels have been waiting in three Ukrainian ports with cargo and signed contracts, ready to go, according to U.N. spokesman Stephane Dujarric.

There was no word about when those ships might set sail, although more are expected to depart Ukraine in the coming days. Russia and Ukraine signed separate agreements with Turkey and the United Nations on July 22 to end a wartime standoff that threatened food security around the globe.

However, the ongoing war and mistrust between Kyiv and Moscow have threatened to derail the deal, which is due to expire after 120 days.

An estimated 20 million tons of grain have been stuck in Ukraine since the start of the 6-month-old war. The U.N.-brokered agreement provided for the establishment of safe corridors through the mined waters outside Ukraine’s ports.

Most of the grain stuck in Ukraine is to feed livestock, according to David Laborde, an expert at the International Food Policy Research Institute in Washington. Only 6 million tons is wheat, and just half of that is for human consumption, Laborde said. He said the Razoni is loaded with chicken feed.

Ukrainian President Volodymyr Zelenskyy says the resumption of grain exports would reduce Russia's ability to extract concessions from the West. “They are losing one of the opportunities to terrorize the world,” he said in his nightly video address late Tuesday.

Russia's war against Ukraine has also disrupted energy supplies in western Europe, with Moscow drastically cutting how much it sends amid fears it could stop sending any at all.

Meanwhile, the U.N. nuclear chief warned that Europe’s largest nuclear power plant in Ukraine “is completely out of control” and urgent steps are needed to avoid a nuclear accident.

Rafael Grossi, director general of the International Atomic Energy Agency, said in an interview Tuesday with The Associated Press that the situation is getting more perilous every day at the Zaporizhzhia plant in the southeastern city of Enerhodar, which Russian troops seized in early March, soon after their Feb. 24. invasion of Ukraine.

“Every principle of nuclear safety has been violated” at the plant, he said. “What is at stake is extremely serious and extremely grave and dangerous.”

He issued an urgent plea to Russia and Ukraine to quickly allow experts to visit the sprawling complex.

Meanwhile, Russian forces kept up their bombardment of the southern Ukrainian city of Mykolaiv, hitting it with shells twice over the past 24 hours — around 9 p.m. on Tuesday and 5 a.m. on Wednesday, governor of the Mykolaiv region Vitaliy Kim reported.

The shelling damaged a pier, an industrial enterprise, residential buildings, a garage cooperative, a supermarket, and a pharmacy, Kim said. It wasn’t immediately clear if there were any casualties.

Mykolaiv is a southern port city, somewhat on par with Odesa, and is located on the Black Sea. The Russians said in April they wanted control over not just eastern, but southern Ukraine. Taking over Odesa and Mykolaiv in the south will give them control over the entire Black Sea coast and a land corridor to the breakaway Moldovan region of Transnistria.

Amid the relentless onslaught by Moscow’s forces, Zelenskyy issued an order to all those remaining in the embattled province to evacuate as soon as possible.

The compulsory evacuation is meant to remove 200,000-220,000 people from Donetsk province by the fall, officials say.

Donetsk Gov. Pavlo Kyrylenko estimated a higher number — 250,000 — ought to leave, though he noted that many residents are reluctant to go.