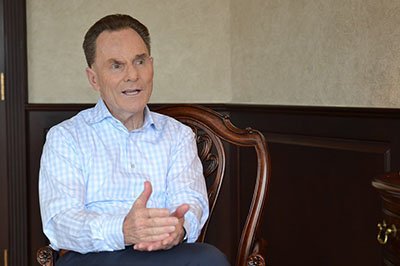 "I feel like the spirit of the convention was overall really strong, and I contribute that to a lot of things. But overall, I think that God answered our prayer. I believe that the Spirit of the Lord was present," Floyd said. "I think there was a resolve coming to Birmingham that we're going to speak clearly, we're going to try to do it in the right way, and I thank God the messengers determined to do it in the right spirit."

In an interview with BP, Floyd discussed the June 11-12 meeting in Birmingham, his outlook for the future and highlighted the importance of next year's annual meeting.

"We are on a path that we need to be on, and we're seemingly on that path together, which is highly encouraging," Floyd said. "I would say this, ... come to Orlando, Florida. We really need Southern Baptists to engage."

Floyd highlighted various elements of the Birmingham meeting, referencing two constitutional amendments, a bylaw amendment creating a standing Credentials Committee, the Caring Well Challenge and tools to help churches address sexual abuse, the "Who's Your One?" personal evangelism challenge and the Go2 initiative to mobilize college students in missions. He noted engaging reports from SBC entities, pointing out the commission of 26 new missionaries through the International Mission Board.

Continue to support the Cooperative Program that supports the sending of missionaries and other work of Southern Baptist entities, he encouraged pastors and laypersons in comments to BP.

"Do what you can to prioritize your giving through the Cooperative Program," he said. "Make sure it's a part of every finance committee conversation when you start budgeting processes.... Try to find a way to give more. Elevate your giving. Accelerate your giving; do it faster than maybe you think you can do it."

"We want everybody to come to Orlando and help us out," he said in encouraging Southern Baptists to attend the 2020 meeting June 9-10 in Orlando. "We need that two-thirds majority again."

The standing Credentials Committee, Floyd said, marks a new way of dealing with challenges the SBC has long addressed regarding morality and doctrinal issues, including racism and sexual abuse.

The possibility of creating the committee stirred debate in advance of the meeting, but drew overwhelming approval from messengers. Addresses from Floyd and SBC President J.D. Greear clarified the committee's purpose and purview, which Floyd believes stemmed misperceptions.

"I think the Executive Committee moving forward in the area of the governing documents was extremely powerful," Floyd said. See related BP story.

He noted progress made to date across the SBC family and affirmed plans to do his part through the EC to encourage living and breathing Gospel urgency; empowering all churches, generations, ethnicities, and languages; telling and celebrating what God is doing; loving others like Jesus loves; and prioritizing, elevating, and accelerating generosity. He encouraged churches to utilize resources including the Caring Well Challenge, Who's Your One, and Go2.

Floyd enjoyed fellowship with a diversity of Southern Baptists through the SBC Many Faces Booth in the Exhibit Hall and ethnic fellowship events in Birmingham. Inclusion has marked his service extending through the pastorate and denominational life.

Nothing tells the SBC story like an annual meeting, he said.

"The more people come to an annual convention meeting, the more people are going to hear our story, and we have a great story in Southern Baptist life," Floyd said. "We're going to do everything we can to start mobilizing people to Orlando immediately. It's not one group's job; it's all of our job. We're going to charge Orlando."

"They really want to see that the missional vision of the Southern Baptist Convention is realized, because it's really the missional vision of Jesus, that every person in the world is told about Jesus and that we make disciples of all nations, all ethnicities," Floyd said. "And that's really what the heart of the Cooperative Program is all about."