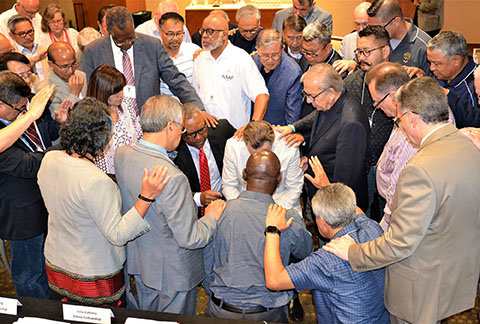 "Quite honestly, we need to develop a deep, spiritual culture," Floyd told the groups. "I'm convinced that we can talk advancement and growth, production until we are worn out. But if the culture of who we are does not improve, it will all go in vain." 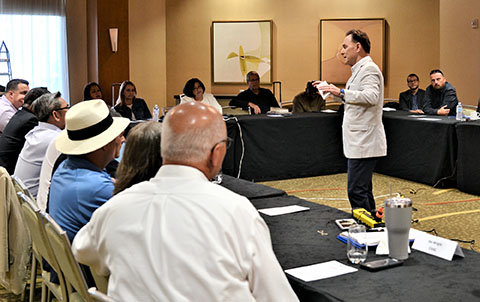 Floyd asked leaders to help him create a culture. Southern Baptists will have "to hold one another accountable and do some things maybe we've not done before" to reach the goal.

He presented at the meetings five keys he described as not new discoveries, but building blocks to help the SBC change its culture. Floyd has championed a godly culture among Southern Baptists since his election as SBC EC president in April.

Southern Baptists, Floyd told leaders, must live and breathe Gospel urgency; empower all churches, all generations, all ethnicities, and all languages; tell and celebrate what God is doing; love like Jesus loved; and prioritize, elevate, and accelerate generosity.

"When you get up and when you speak, there is an urgency in your soul that we can't wait all day long to get this Gospel out somewhere," Floyd said of the soul-saving death, burial, and resurrection of Jesus Christ. "This Gospel is critical. We need to have … anyone who leads in any capacity, whether they be male or female, to be able to stand up and proclaim and to know and to express this is important."

Southern Baptists need to mobilize as many people as possible nationally and globally, he said, to spread the Gospel among all nations.

"Not one ethnicity in the room can win their ethnicity by themselves," he said. "And we certainly can't touch this world without all of our help."

The SBC is charged with empowering, not governing, churches, Floyd said, and must empower all demographics. Regarding languages in particular, while Southern Baptists across the nation worship in an estimated 90 languages, Floyd noted more than 800 languages are represented in New York City alone.

Tell and celebrate what God is doing.

"People get inspired by stories. The more we tell our good stories, the less time we'll have to tell our bad stories," Floyd said. "When you create a culture where good is good news, then that's what you really want to hear."

"We don't need to be in the business of choosing who we love," Floyd said, promoting a love that is willful and unconditional. "I want to do all I can, with all I have, to keep people within my circle of love, because … that's what Jesus would do."

Floyd invited and responded to questions from both groups.

The CAAC is composed of representatives of various former councils that have compiled reports aimed at increasing SBC participation among a broad swath of Southern Baptists. The group meets twice a year.

The Ethnic Fellowship heard updates on domestic and international missions, the CAAC, the Google Dashboard project tracking demographic diversity, ministry progress reports, and the SBC Many Faces Booth at the 2019 and 2020 annual meetings.