74° F
Light Rain
The voice of Georgia Baptists since 1822

For a quarter-century, Williams a solid presence at First Waycross

Mark Williams has led the music ministry at First Baptist Waycross for the past 25 years, becoming a part of the congregation's fabric through his service beyond what his title implies. FBC WAYCROSS/Special
Posted Friday, December 2, 2016 11:47 am
Scott Barkley

Mark Williams, here at Norman Park on an associational youth choir retreat, has led the music ministry at First Baptist Waycross for the past 25 years, becoming a part of the congregation's fabric through his service beyond what his title implies. FBC WAYCROSS/Special

Music appears to be a free-flowing collection of sounds and voices. Strings and beats. Keys and pipes. But it requires precision. Details matter.

Talk to those who’ve known Mark Williams any amount of time and that word – details – pops up. As minister of music for First Baptist Church in Waycross the past 25 years, Williams has directed multiple voices and instrumentalists. He’s connected hymn with homily where others wouldn’t see a link, but they’d sense it.

Barbara Chase joined the office staff as secretary in April 1991, six months before Williams came on board that fall.

“He’s a great administrator, very organized,” she says. “Mark has a positive attitude and you just look forward to coming in to the office and working with him every day.”

More than  a music minister

Outside Waycross, Williams has been a part of The Centurymen, a men's chorus comprised of Christian musicians who are church music leaders from across the country, since 1999. During that time he's held many leadership positions in the group. This summer, as president, he led them on a 12-day mission tour throughout Cuba, presenting 16 concerts. 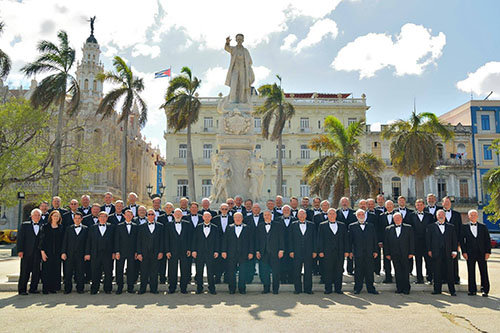 This year, Williams led The Centurymen as president on a 12-day mission tour of Cuba. The Centurymen are a national group of professional Christian music ministers. THE CENTURYMEN/Special

In addition, Williams carries the title of senior minister at First Baptist. This comes for the staff member basically in charge of day-to-day ministry during the interim period when the church is without a pastor. Williams currently holds that position for the second time while at the church.

So, in addition to planning worship each Sunday and directing various choirs among different age groups, Williams oversees the pastoral ministry, financial and property management, and supervision of the staff. Oh yeah, he also leads the senior adult ministry (an interview for this article had to be put on hold while he led the group on a Jacksonville, FL excursion).

“Mark does funerals, visitations, weddings, whatever needs to be handled during the week,” Chase points out. He’s very detailed and pays attention to the small things.”

‘He’s not my friend; he’s my brother’ 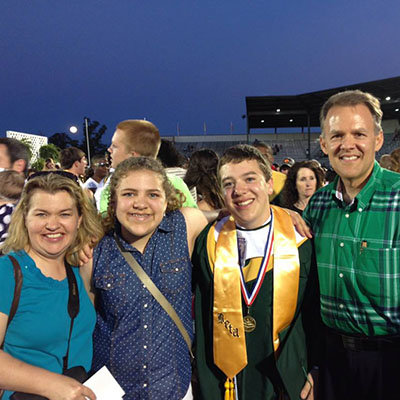 Mark and Susan Williams stand with their children, Emily and David, at David's graduation from Ware County High School. David is set to graduate from Valdosta State University next week. WILLIAMS FAMILY/Special

John Wheeler, First Baptist minister to students, couldn’t be more different from Williams. However, Wheeler counts his best friend “as solid of a guy as you could ever want.”

Wheeler has been at the church almost as long – 18 years. Not only are the two extremely close, but their families practically see each other as extended kin. That happens when you take vacations together and gather every year at the others’ house following First Baptist’s Christmas Eve services. The Rodeo Mexican Restaurant in Waycross practically has a license to exist as long as both families continue to go there – as they have pretty much every Sunday for the last 15 years – for lunch after worship.

“Mark has dedicated himself fully to this church and serving God. We’ve been extremely blessed through that,” testifies Wheeler. “Over the years we’ve done a number of music productions that were fantastic, both with our church and community-wide.”

Their friendship isn’t an outlier among the staff or even First Waycross as a whole, he stresses.

“This church is unique in that regard. They take you in, make you a part of the family, and love you to death,” Wheeler says. “We’ve enjoyed a great relationship between staff. We care deeply for each other and support one another personally and professionally.”

In 2003 Eric Matheson sat down to lunch with Williams. Matheson, at the time pastor of First Baptist Avondale Estates in Atlanta, was in the process of meeting with First Waycross's pastor search committee. Consequently, it made sense for a get-together.

"I knew we'd get along well," remembers Matheson of that lunch. "I like to plan my sermons a few months ahead, so we did great in preparing. That was probably one of the hallmarks of our time working together.

"I'd give Mark three months' worth of sermon titles and texts and put together a Sermon Day Summary sheet. I'd suggest some hymns, which Mark could accept or reject. One of our favorite things was to put together a worship service with a flow between the sermon, music, responsive reading, all aspects."

Matheson would stay as pastor at First Baptist through last year, when he took a vice president position at Baptist Village in Waycross. Felix Haynes has served as interim pastor for the last year-and-a-half on Sundays and Wednesdays.

Words to the song appear on a screen for First Waycross worshippers. That's not unusual for churches today. What is unusual is Williams' insistence that the melody appears on-screen as well. 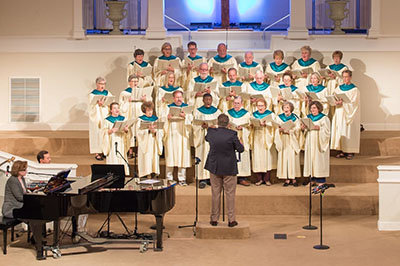 Williams gets teased about his attention to detail, but there's a reason behind it. He sees no difference in the importance of a singer hitting the proper note than a football coach watching a wide receiver run a 10-yard slant when the play was designed for 15 yards. Details matter.

"We owe God our very best in worship. If something's out of tune it's not our very best," he stresses. "If we're not annunciating the text to where people can understand us, then why are we up there at all? Timing is crucial."

Williams like to use Pythagoras, the Greek mathematician you probably know better for his theorem you had to learn in algebra, as an example. "He's known for math but he was also a musician. He understood the precision necessary for both to work."

Matheson says Williams represents the best combination of musician-plus-minister he's seen. "His ministry goes far beyond music. He's done an exceptional job with the senior adults. People at First Baptist know he cares about the church and he's going to lead well during the interim period." 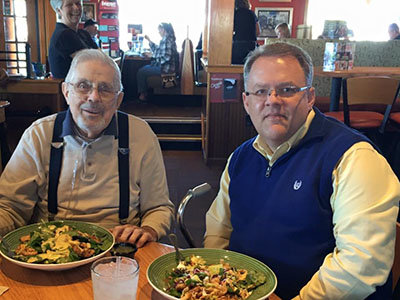 Bill Holland, a member of First Waycross, has lunch with Williams, as has been their habit most Thursdays. JOHN WHEELER/Special

In 1991 Williams arrived in Waycross with his wife, Susan, from Dallas, Texas. He had just completed his degree at Southwestern Seminary; she'd left her job at the Annuity Board of the Southern Baptist Convention, now GuideStone. Honestly, he says, they didn't expect to stay in Ware County more than five years.

"Aletha Shell, one of the ladies on my search committee, told us we'd want to stay here. In my mind I rolled my eyes at her," Williams admits.

"Lo and behold, she was right.

"Waycross is a nice town and a great place to raise a family. We have a great community and the churches work well together. I've really fallen in love with that. It was a real culture shock coming from Dallas."

The shock has worn off, but there's benefit in having differences. Wheeler loves to be outdoors while Williams equates "roughing it" with slow room service. Where one pays attention to specifics, the other doesn't as much. 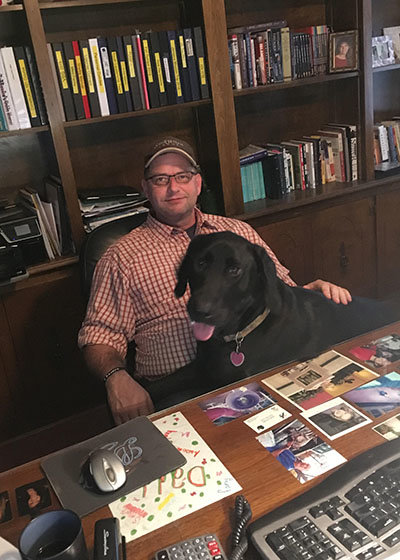 "John has taught me to loosen up a bit, and I've taught him to be more organized," says Williams. "I value his counsel very closely."

About ten months ago Mark Williams began to value something else of Wheeler's. That's when First Waycross's student minister began bringing his black lab, Buddy, to work. He still does most every day. Problems don't arise from Buddy's presence, but his absence. "The secretaries get mad if I don't bring him with me," smiles Wheeler.

Mark and Buddy Wheeler have become great friends and, in fact, Buddy has picked up something from the music minister.

Whenever Buddy wants a treat, he gathers himself up and pads his way to Mark's office. Every time, Mark reaches into a box of Milk Bone dog biscuits and hands one to Buddy, who moves on until it's time for another treat, at which point the process repeats itself. It's difficult to tell who's trained who.