Fordham and Homer team up in Hispanic church outreach 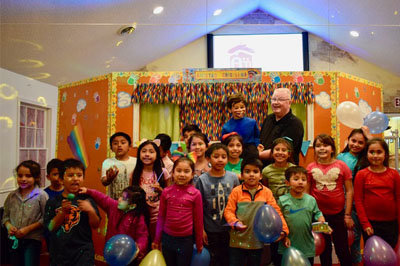 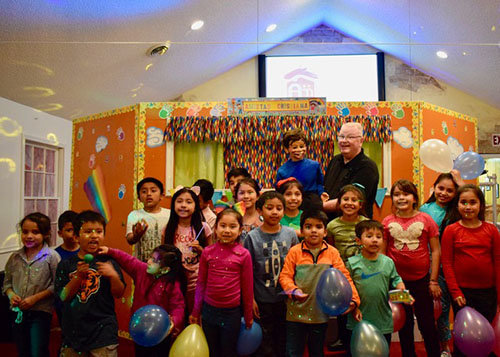 FAYETTEVILLE — Few people are more passionate about winning the lost to faith in Christ than Evangelist Keith Fordham. He is fully invested in reaching the next generation (#ReachingNextGen), which is the emphasis of the Georgia Baptist Mission Board for the coming years.

Georgia Baptist Churches are invited and encouraged to declare their choice to “reach the next generation.” For more information check out the Mission Board website.

In an effort to lend his support to the emphasis of the Mission Board, Fordham traveled to Gainesville on March 16 to present the Gospel to the Armistad (Friendship) Cristiana (Christian) Church where Javier Chavez is pastor. This bilingual church is an 18-month-old Hispanic church plant out of First Baptist Church in Gainesville.

Fordham and his ventriloquist partner, Homer, had the privilege of addressing a large group of children and youth for the Friday night gathering.

“The small church was filled to capacity," Fordham stated. "Parents of the youth and children were present. The meeting was held on a Friday night, because the parents work in the chicken processing industry and have to work long hours all during the week and get up early each morning, but since they don’t have to work on Saturdays they can stay out later on Friday nights. 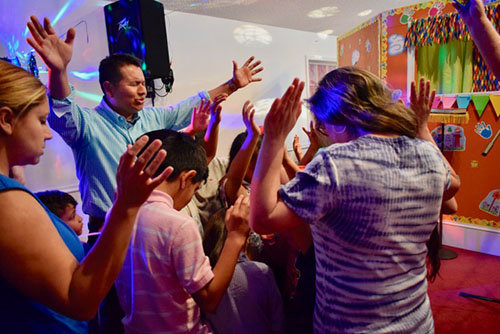 “On this particular Friday clowns, puppets, and singing preceded the ventriloquism. Homer presented his version of the plan of salvation by using the colors in the Wordless Book. The black represents the dark side of sin. Red stands for the blood of Jesus. White symbolizes Jesus washing out the dark stain of sin and offering His forgiveness. The gold stands for the streets of heaven; and green stands for the spiritual growth that takes place when we follow His precepts and do His will.”

An added feature on this particular night involved Pastor Chavez baptizing a volunteer from the audience with Homer asking questions about the ordinance of baptism.

Fordham preached a five-minute sermon on “The Serpent in the Wilderness” and closed his remarks with a public invitation. There were 16 individuals (children and youth) who responded by professing their faith in Jesus Christ.

Fordham concluded, “After the service a couple invited the pastor to come to their home on Monday afternoon and explain the Gospel to them. The pastor did as he was asked and his obedience to go and share the Gospel resulted in both the husband and wife trusting Christ as their Savior. Indeed, ‘it is God’s will that all men be saved and come to the knowledge of the truth.’” 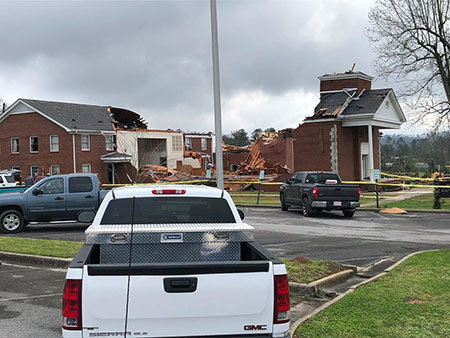 Two years ago Keith Fordham preached at West Point Baptist Church in Jacksonville, AL which was destroyed by a tornado March 19. FORDHAMS/Special

Less than a week after Fordham’s experience in Gainesville, a tornado swept through Jacksonville, AL as reported in The Christian Index on March 20. West Point Baptist Church in Jacksonville suffered extensive damage as a result of that storm’s ruthless march through east Alabama.

Fordham recalled having preached a revival in that church only two years earlier when six were saved and urged Christians everywhere to pray for Pastor Ronny Moore and his congregation. (Notice the photo at right and you will see the havoc wrought by the tornado).