FOURTH OF JULY: Past, present, & future 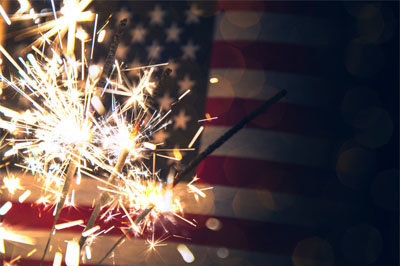 These are as American as baseball, hot dogs, and apple pie and are appropriate ways to celebrate Independence Day. But while celebrating the Fourth and enjoying our present freedoms, may I suggest that we take a look back, then let's look to the future.

Look back to July 4, 1776, when Thomas Jefferson, assisted by such patriarchs as Ben Franklin and John Adams, completed the final wording of the document presented to the Second Continental Congress, which evolved into the birth certificate of the United States of America.

That document, the Declaration of Independence, was eventually signed by 56 men who pledged their lives, their fortunes, and their sacred honor to secure the opportunity for an experiment in democratic government. And it led to the greatest free nation the world has ever seen.

Although the "self-evident truth that all men are created equal" was not yet understood as meaning that all human beings of both genders and all races are equal in the sight of the Creator, the document has become the capstone of freedom for all Americans.

Although the meaning of "endowed by their Creator with certain unalienable rights" has been misrepresented at times from many different directions, those rights have been fought for, debated, and paraded through the streets of this nation for more than 240 years. Some, in the name of tolerance, have insisted that their rights include forcing others to comply with their wishes. Others, insisting on their understanding of "science," have argued against the reality of a Creator. Many have added their own desires to the list of "life, liberty, and the pursuit of happiness."

Still the Declaration of Independence is one of the greatest human documents ever created, and it represents a magnanimous vision for all – a "land of the free and home of the brave."

Four score and seven years later, Abraham Lincoln pointed out in his Gettysburg Address that the nation could possibly perish. That speech was made during the deadliest and most devastating war in America's history. Many wars before and after have cost us dearly in the blood of our sons and daughters, but most of our conflicts have been with "outsiders" and America has been united in battle. The "Civil" War, on the other hand, divided our nation against itself.

Now, two hundred, two score, and three years after the states united to declare independence from Great Britain, we find ourselves divided by politics, policies, power struggles, and pride. Too few of our leaders seem willing to sacrifice personal feelings and ideas for the greater good of the masses. While there will never be unanimous agreement on every conviction, surely we can agree to place far greater priority on negotiating with our fellow Americans than negotiating with our avowed enemies.

My prayer is that our precious grandchildren will grow up in an America somewhat like the one where I grew up. With all its faults, it has been the greatest nation throughout all of history.

But if that future is to become reality, more of us must return to the God of our Fathers in repentance, humility, prayer, and commitment. We must again become a nation with common sense. We must use the word "tolerance" as something more than political rhetoric. We must again practice compassion, even while passionately defending differing points of view. And, yes, we must also stand for truth as revealed by our Creator.

As we celebrate our freedom, let's remember that it came at a great cost to those who went before us – and, all the more, that our freedom from sin's penalty was paid for by our Savior with His divine sacrifice on the cross, which calls for the most serious of celebrations.

Steve Playl, a retired Baptist pastor, is a chaplain at a Bristol, Tennessee, hospital, a newspaper columnist, and college instructor.

Town honors Ahmaud Arbery day after end of hate crimes case
BRUNSWICK, Ga. (AP) — Ahmaud Arbery is being honored by his hometown after stiff sentences for hate crimes against the white men who chased and killed him. Dozens of people joined Arbery's family on a sweltering street corner Tuesday as Brunswick city officials unveiled signs designating a 2.7-mile roadway as Honorary Ahmaud Arbery Street. Arbery was fatally shot on Feb. 23, 2020, after being chased by three men in pickup trucks who wrongly suspected him of committing crimes.
Georgia farm fined after food waste release causes fish kill
WASHINGTON, Ga. (AP) — A Georgia dairy farm has been fined after a release of food waste caused a fish kill. It's a rare instance of the government getting involved with a practice that counties can’t regulate despite chronic complaints from residents. The Georgia Environmental Protection Division fined McAvoy Farms, also known as Mar Leta Farms, $5,000 after nearly 1,700 fish died in the Little River in Wilkes County on June 16.
© Copyright 2022 The Christian Index | Copyright/Terms of Use
Powered by Creative Circle Media Solutions