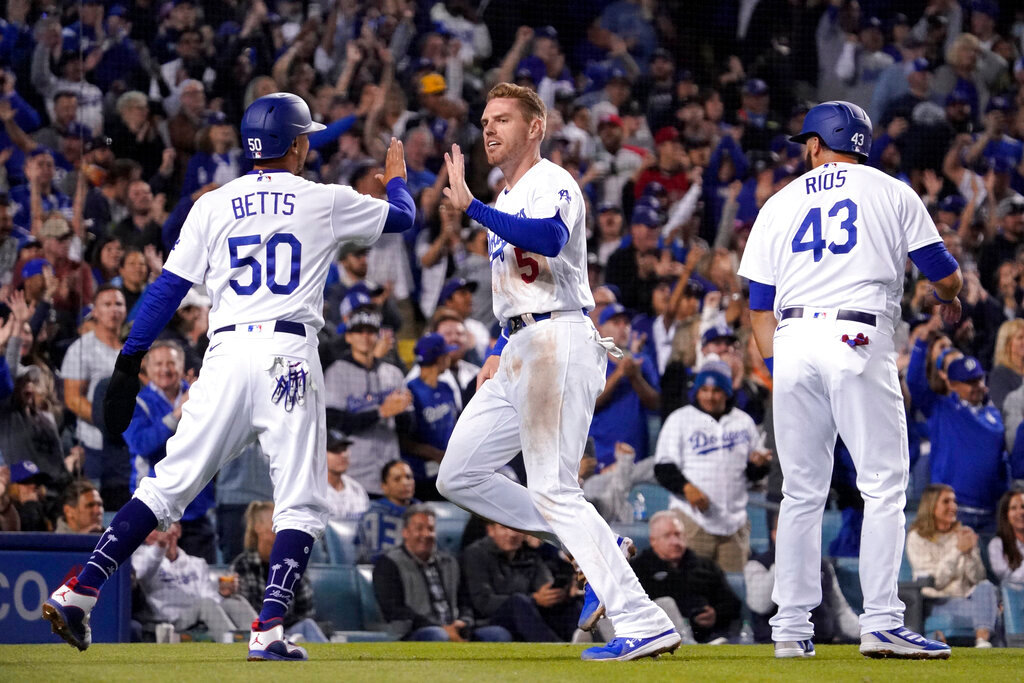 Los Angeles Dodgers' Freddie Freeman, center, is congratulated by Mookie Betts, left, and Edwin Rios after they scored on a double by Trea Turner during the fourth inning of a baseball game against the Atlanta Braves Monday, April 18, 2022, in Los Angeles. (AP Photo/Mark J. Terrill)
Mark J. Terrill
Posted Tuesday, April 19, 2022 9:29 am
By BETH HARRIS

Freeman didn't wait to tee off against his old team, sending a shot to the left-field pavilion in the first off Huascar Ynoa (0-2). That triggered chants of “Freddie! Freddie!” from the sellout crowd of 52,052 as the first baseman pumped his right arm coming into home plate.

Before the game, an emotional Freeman spent time in the Braves clubhouse, reliving memories of winning last year's World Series, the franchise's first championship since 1995. He signed a $162 million, six-year deal with the Dodgers in March, ending a 12-year run with the Braves, the only team the Southern California native had played for.

Freeman flashed stellar defense in the seventh, diving to his right to make a backhand stab of Dansby Swanson's shot for the first out. He was 1 for 3 with two runs and two walks.

The Dodgers tacked on five runs in the fourth when they batted around in a rematch of the past two NL Championship Series.

Cody Bellinger got things going with an RBI groundout and designated hitter Edwin Rios added an RBI single. Turner's three-run double off Sean Newcomb landed in left between Orlando Arcia and the foul line, making it 6-0.

Bellinger homered leading off the eighth for a 7-4 lead.

Atlanta's Guillermo Heredia and Ozzie Albies homered off Clayton Kershaw (2-0). Fourteen of the Braves' 15 homers this season have been solo shots.

Kershaw moved into second on the list of starting pitchers who've retired the most consecutive batters to start a season since 1960. He retired 23 in a row, trailing leader Yu Darvish, who retired 26 straight in 2013.

Craig Kimbrel pitched the ninth to earn his third save.

Kenley Jansen returned to Dodger Stadium for the first time since he signed a one-year deal with the Braves in March. The Dodgers' career saves leader received a standing ovation while being honored before the game.

Braves: OF Ronald Acuña Jr. is scheduled to start an injury rehabilitation assignment with Triple-A Gwinnett at Jacksonville on Tuesday. It will be his first game since July 10, when he tore his right ACL during a game against Miami.