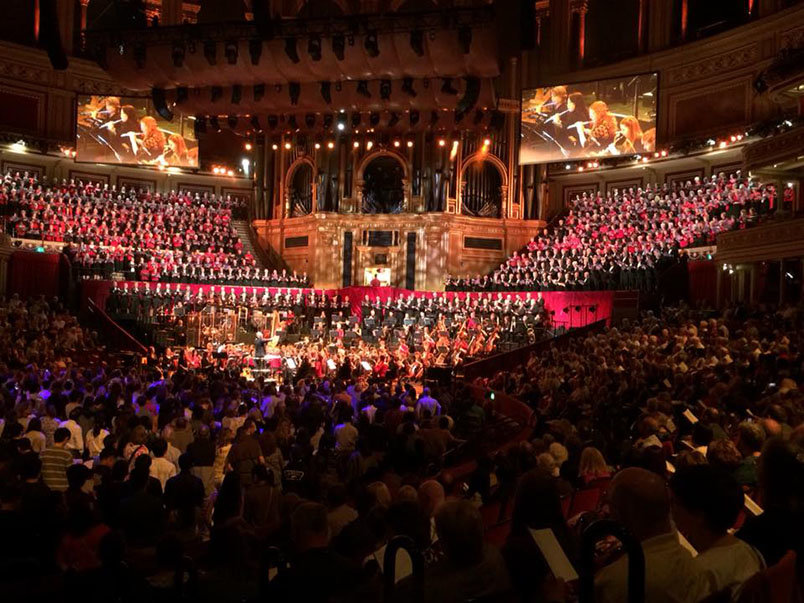 The Sons of Jubal, an integral part of the Worship/Music Ministry of the Georgia Baptist Mission Board, have completed their “Ignite Tour 2018” to Wales and England. The mass men’s choir and orchestra, under the direction of Georgia Baptist Missionary/Music Specialist Jon Duncan, presented concerts in churches, cathedrals, and concert halls and assisted with mission projects throughout the tour.

The Sons of Jubal is composed of ministers of music, pastors, laymen, and gifted musicians from across Georgia. Dr. J. Robert White, executive director of the Georgia Baptist Mission Board, is also a member of the Sons of Jubal. 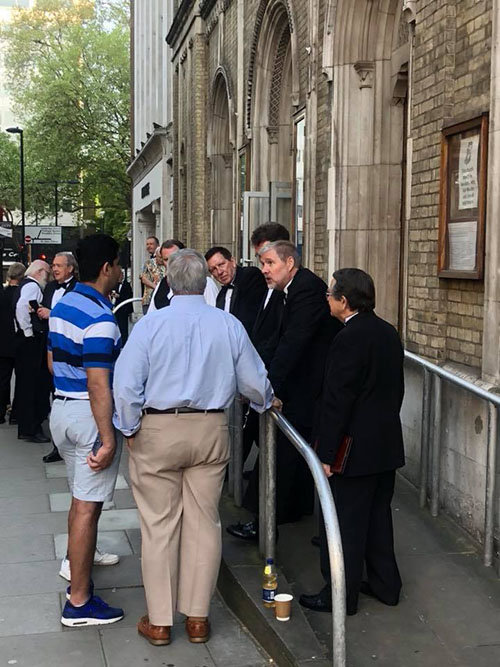 Members of the Sons of Jubal share the gospel with a follower of Hinduism on a London street outside of a church. SOJ/Special

One of the members of the Sons of Jubal is Danny Stubbs, the minister of music at Houston Lake Baptist Church in Perry. The Christian Index interviewed him and he recalled highlights of the tour for our readers. Duncan also added some of his observations concerning the “Ignite Tour 2018.”

Stubbs commented, “Being able to communicate with the local people in Wales and England and share the love of Christ through music and the spoken word definitely was the high point of the trip for me. There was no need for a translator on this trip; and we found the people in the churches, schools, and arenas where we sang very warm and open to the message we shared.”

Stubbs also enjoyed hearing the stories of John Newton, William Cowper, and William Carey and see first hand where they were trained and ministered. He recalled, “In Bristol, we saw the oldest Methodist church where John and Charles Wesley preached and wrote hymns, many of which are still sung today.”

While in Wales the Sons of Jubal found that the people have a love of music, both secular and spiritual. Stubbs explained, “One of our evening services was held in a school auditorium where we had sung a program for the children of the school earlier that day.

“The children sang 'He’s Got the Whole World in His Hands' for us; and then a smaller, but more select group sang for us. They were fantastic! The children are taught a love of singing and music in their homes, in their schools, and it is perpetuated for generations.

“In that evening concert in the school, there was a community male chorus that also sang. It was a large group whose singing resembled that of a barbershop quartet. The men sang folk songs, love songs, patriotic songs, and spiritual songs.

“This love of music and singing has carried over into the churches where we saw worshippers singing with joy, vigor, and vitality.”

The “Ignite Tour” included the Sons of Jubal singing at Royal Albert Hall, London’s most iconic venue. This 5,272-seat concert hall was opened by Queen Victoria in 1871 and has had many great performers appear on its stage.

Stubbs declared, “In addition to the large seating area Royal Albert Hall has a large open floor for standing room. We joined 'Prom Praise London 2018,' a 120-piece orchestra, a 500-voice choir from around the U.K., including nearly 150 men from the Sons of Jubal, all led by British composer, organist, orchestrator, and conductor Noel Tredinnick.

“The setting was extravagant, the music was flawless, and the praise was magnificent. The 600 people on the floor in the center of the Hall were constantly on their feet, raising their hands, waving their arms, and singing enthusiastically during the times the audience was asked to participate.

“’How Great Thou Art’ and ‘Happy Day’ were only a couple of the songs we all sang together. I must admit that I could hardly sing the last chorus of ‘How Great Thou Art’ for the tears flowing down my face. It was a glimpse of heaven and the praise that might be offered to our God in glory.”

The “Ignite Tour” was demanding with the Sons of Jubal arising often before 5 a.m., getting a box of breakfast or a quick breakfast in the hotel before departing for the daily mission endeavors. One day the men sang three concerts, but Stubbs indicated that the Lord supplied the strength and energy to accomplish all that He had set before during the course of the day.

It was a glimpse of heaven and the praise that might be offered to our God in glory.”

Stubbs expressed appreciation for the incredible leadership of Jon Duncan and for the presence and participation of J. Robert White in both the mission ventures and in singing with the Sons of Jubal.

“Statistics show that church attendance is very low in the entirety of Europe, including all areas of the United Kingdom,” stated Stubbs. “With attendance declining in almost every denomination, there are some bright spots scattered in urban areas.

Jon Duncan added, “Very few churches are doing well. If anything the conservative Anglican churches are doing the best. All Souls in London features contemporary and traditional forms in multi-gen approaches to worship and the church is full every Sunday. I believe it is due to conservative Gospel centric preaching. Metropolitan Tabernacle (Spurgeon’s church) is extremely traditional and is also full each Sunday. 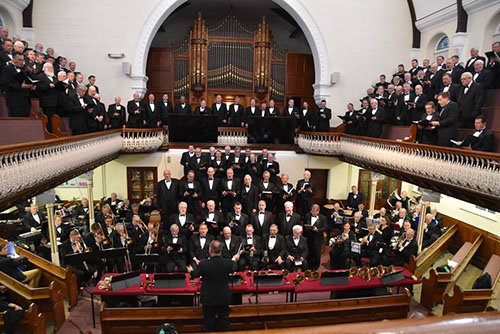 “On the two Sundays that we were in the country, the Sons of Jubal divided into seven or eight groups and led worship in smaller churches with singers, instrumentalists, and preaching by pastors or speakers who are in the ‘Jubals.’ In the churches I visited there were a small group of local parishioners in attendance, mostly seniors, who were attempting to do whatever they could to keep their church open and viable.

Duncan had a broader perspective and stated, “In most of our churches, we saw an International flavor in the congregations that reflected all age groups. Both churches I was in had about equal numbers of internationals to nationals and were about equal in age groups.

The churches are struggling financially and in commitment. Due to the economy many church members hold more than one job making church support and volunteer options limited.

“This remnant of believers was thrilled to see the Americans come to their churches to help ‘ignite’ revival fires and fan into flame the message of Jesus. God has a remnant in the U.K. and I pray that they will stand firm and work and preach with fervor to re-ignite God’s church in their community.”

Duncan concluded, “I would add that the response to Dr. White and our other pastors were a blessing. One pastor told me that they would like to see more Georgia pastors come to the UK with their passion to see the lost come to faith.

“Another stated he wanted to come to Georgia and catch what we have! Another told me that Dr. White’s clear communication of the Gospel is what is needed among all our Baptist churches.

“Another pastor told me that following our concert and Dr. White’s message, he had people contact him to set up appointments to hear more about how to have eternal life. I contacted him later and he told me that he in fact made the appointments and anticipates several who will be baptized as a result of this effort."