Students are assimilated in American culture in a variety of ways through Georgia Baptist's literary missions outreach, such as visiting a farmer's market. PAULETTE DEHART/Special

Often, churches in Georgia wonder how they can be personally involved in missions. One unique ministry that has flourished in recent years is Literacy Missions.

In a recent interview with Paulette DeHart of the Georgia Baptist Mission Board, State Missionary Buck Burch explored the use of combinations of learning styles to teach Kingdom Generosity. With the influx of new ethnic people groups throughout Georgia and especially with the increase in non-English populations, churches have a great opportunity to generously engage in missions.

DeHart described how Literacy Missions is a relatively recent missions phenomenon. In 1959 in the hills of Kentucky, one woman with a burden for illiterate people began to teach them how to read and write. Later, WMU began providing expanded resources for this ministry, and a mission to Alaska to work with foreign wives of U.S. soldiers was born. English as a Second Language (ESL) is now the most popular of five literacy mission ministries; the others are academic tutoring, teaching Spanish to Spanish, English abroad, and U.S. citizenship. 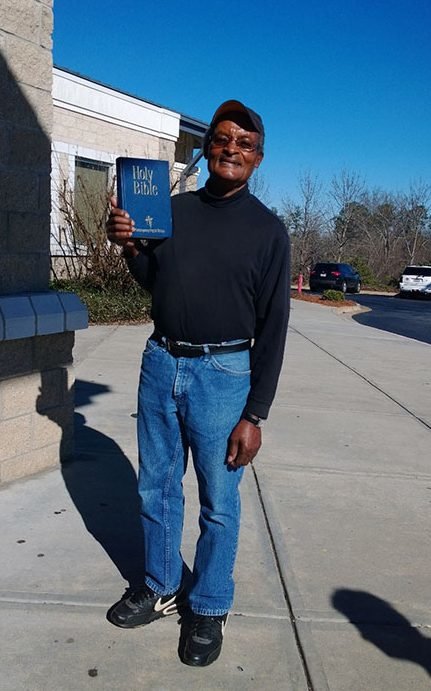 Adult Reading and Writing students learn to read the Bible in English as part of their instruction. This individual read the Bible for the first time by himself at age 75. PAULETTE DEHART/Special

In our current political environment, there are sometimes polarized viewpoints related to immigration. But with unprecedented non-English speaking populations in larger urban areas throughout Georgia, churches have a theological question to answer related to the mission of the church.

She says reaching out to internationals who are new arrivals in America is a way for the church to express Kingdom Generosity by providing a “safe, friendly, fun, and free” environment to assimilate. She believes making the Gospel an intentional and integral part of this help is mandatory. In the interview, she describes how Bibles are used in each language of the students, ranging from Bangla to Khmer, to Russian to Spanish.

Literacy Missions is generosity taught to others. It is an act of giving itself. And because different people learn in different ways, it has to involve a combination of learning styles. Some visual aids are used, some auditory media, and many hands-on kinesthetic manipulatives are employed. DeHart believes that when people go above and beyond just obediently giving their tithe into sacrificially giving to others, it paves the way for reception of a relevant Gospel message to those God is bringing into Georgia.

For the past six years, this outreach through the Georgia Baptist Mission Board in local churches has resulted in an average of 54 people saved annually. Moreover, these new local church ministries have resulted in new church starts with some years producing up to four new successful church plants.

Senior pastors, church leaders, Sunday School teachers, and (of course) music & worship pastors have been sent a link to listen to the Kingdom Generosity podcast interview with Paulette DeHart. This is Episode Seven and can be accessed freely at www.tinyurl.com/kgmoment.