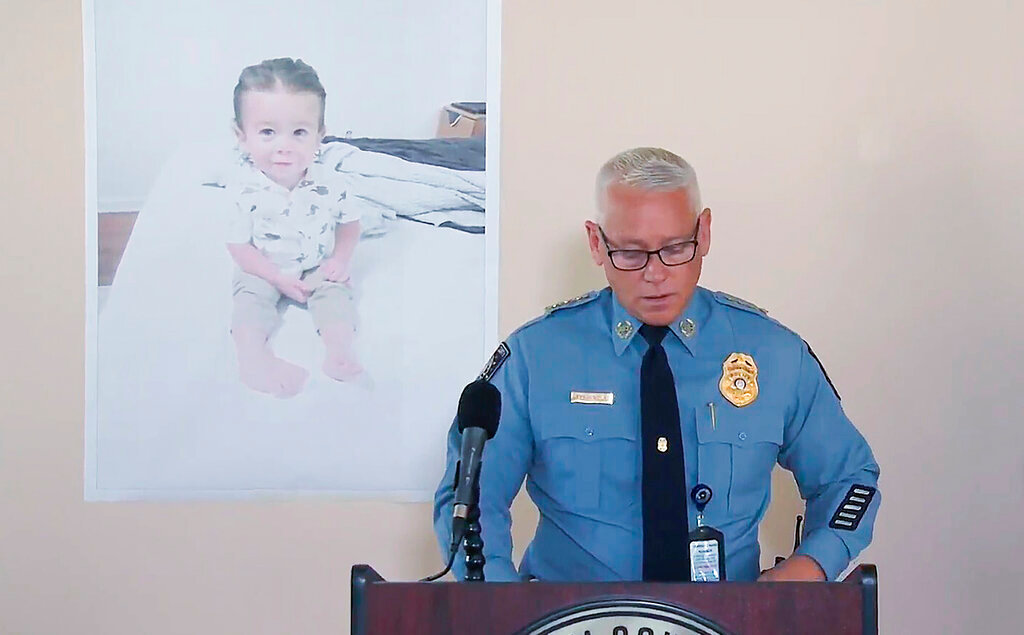 FLE - Chatham County Police Chief Jeff Hadley speaks to reporters as he stands in front of a large photo of missing toddler Quinton Simon at a police operations center being used in the search for the boy's remains just outside Savannah, Ga., on Oct. 18, 2022. Quinton's mother has been arrested in connection with the child's disappearance and presumed death, authorities said Monday, Nov. 21. (WSAV-TV via AP, File)
Posted Monday, November 21, 2022 9:34 pm

SAVANNAH, Ga. (AP) — The mother of a toddler reported missing Oct. 5 in Georgia has been arrested in connection with the child's disappearance and presumed death, authorities said Monday.

The Chatham County Police Department in a post on Twitter said officers had arrested Leilani Simon, 22, on charges of malice murder, concealing the death of another person, false reporting and making false statements involving her son — 20-month-old Quinton Simon.

Police Chief Jeff Hadley, at a news conference later Monday, said Simon has been the sole suspect since the child was first reported missing.

“This is a heartbreaking development,” Hadley said. “From the beginning, we were hopeful we would find him alive and unharmed. But evidence has always pointed to the mother and we believe his remains were found in the landfill.”

Human remains were found in a landfill on Friday and the FBI, which has assisted in the search and other aspects of the case, is working to confirm the remains are those of the child, Hadley said.

"It could be days before we have full confirmation, said Will Clarke, the supervisory senior resident agent for the FBI's Savannah and Brunswick offices.

“What happened to this child should not happen to anyone let alone by someone who should be their protector,” he added.

Hadley said Simon was transported to the Chatham County Detention Center where she will await a bond hearing. Simon had no listed phone number and it was not known Monday if she had a lawyer who could speak on her behalf. Court records showed she represented herself in two civil cases filed since March involving custody of her children and child support.

“We do not anticipate any other arrests in connection with this case,” Hadley said.

“We are deeply saddened by this case, but we are thankful that we are one step closer to justice for little Quinton,” the police department said in its post on Twitter announcing the arrest.

Hadley said they are still determining whether to continue searching the landfill in light of Friday's findings and will confer with the FBI before that decision is made.

“We have a high level of confidence that those are Quinton's remains,” Hadley said of why authorities moved to arrest Simon.