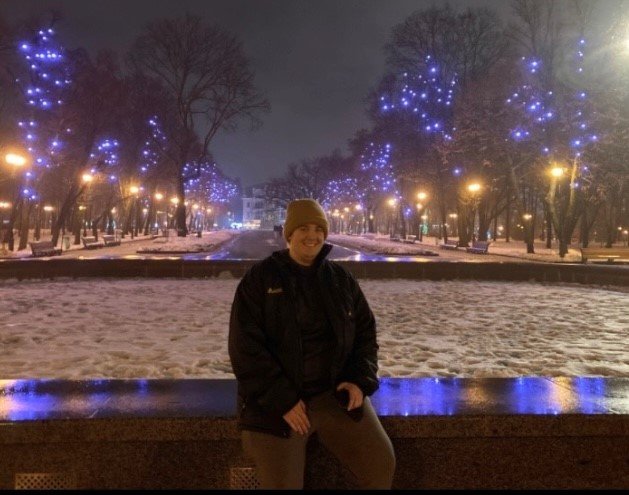 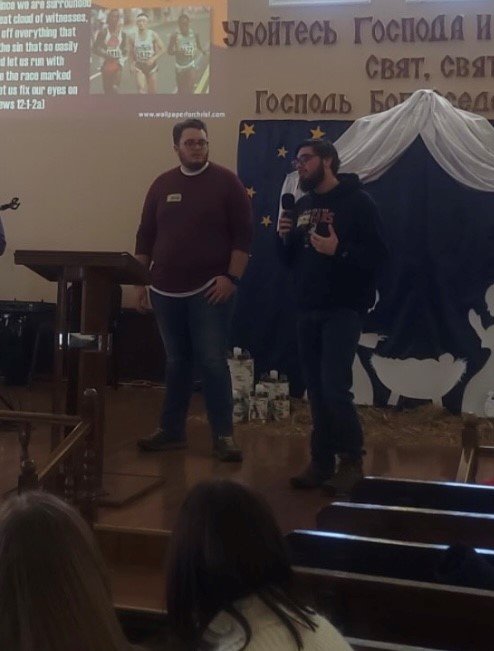 Jaxson Wood and Matthew Wacter, two of the three past presidents of the Columbus State University Baptist Collegiate Ministry who took the mission trip, speak to Ukrainian believers. 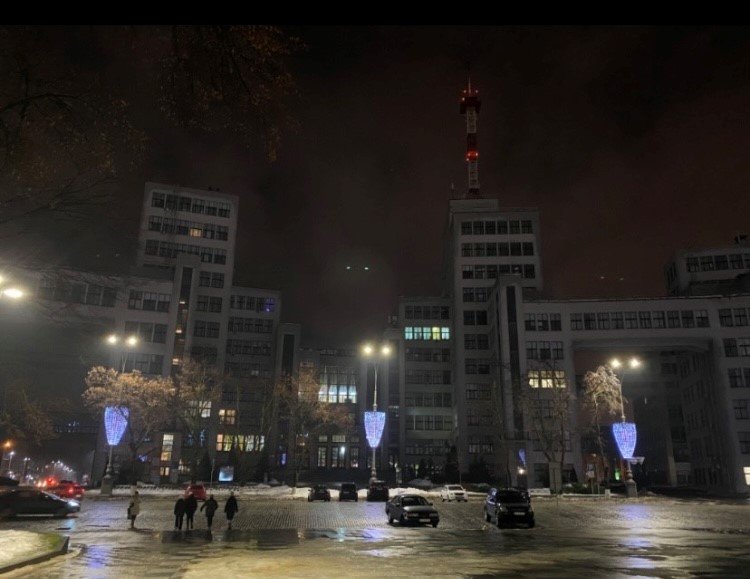 People walk beneath street lamps with the skyline in front of them. 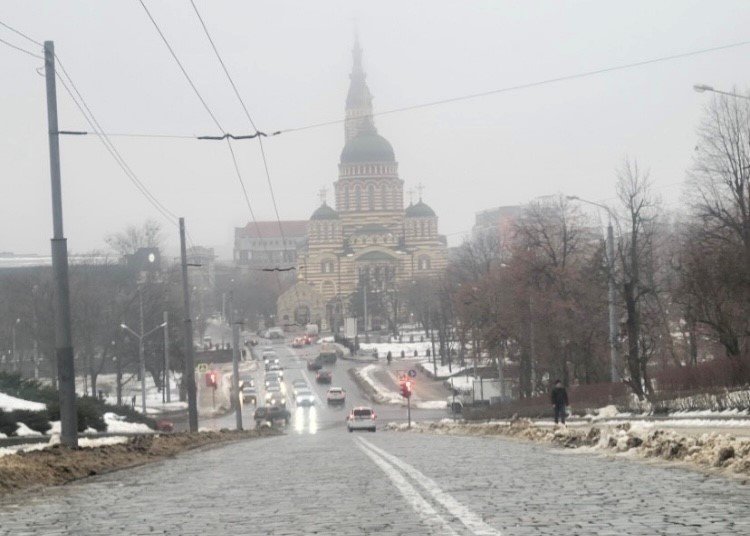 Snow and ice alongside roads are the wintertime norm in the Ukraine.
Previous Next
Posted Wednesday, January 26, 2022 8:35 am
By ROGER ALFORD, The Christian Index

COLUMBUS, Ga. – Everyday life in the Ukraine seems to go along unfazed by the Russian military buildup along the country’s border, a short-term missionary from Columbus State University observed during a visit there.

“I’m sure there must have been tension with people wondering about things,” said John Walker of Butler, Ga., who went on the winter trip with fellow Columbus State students Jaxson Wood and Matthew Wacter, both residents of Columbus. “Where we were, there wasn’t noticeable tension. I didn’t feel unsafe.”

Ukraine's leaders have reassured the nation that an invasion from neighboring Russia isn’t imminent, even as they acknowledged the threat is real and received a shipment of U.S. military equipment to shore up their defenses, The Associated Press reported on Tuesday.

Moscow denied it is planning an invasion, but has positioned an estimated 100,000 troops near Ukraine in recent weeks and is holding military drills at multiple locations in Russia. That has led the United States and its NATO allies to rush to prepare for a possible war.

The Columbus State trio put such concerns aside during their trip, focusing all their time on sharing the gospel with people they interacted with, like a young man who showed up for an English language camp at a church because he wanted to practice the language skills with the Americans.

“I was able to share Christ with him, and invite him to come back to that church,” said Wacter, a recent graduate of Columbus State who, like his two fellow missionaries, is a former president of the school’s Baptist Collegiate Ministry. “He actually signed up to be part of their youth group. He had never been to that church before, had no interest in it, came, heard the gospel, and signed up to learn more about Jesus.”

Wood said the Lord’s hand was on the trip from the beginning, allowing the missionaries to avoid COVID-related travel delays and giving them lots of opportunities to share the gospel in the airports and on the planes enroute to the Ukraine. In a coffee shop in an Istanbul airport, Wood said they were able to explain the gospel to a young woman.

“She asked if she could hang out with us in the airport during the layover,” Wood said. “We went to a coffee shop and laid out the gospel for her.”

Walker said worshipping in a culture very different from his own was especially memorable.

“It was an incredible glimpse of what heaven will be like,” he said. “It’s going to be every nation, every tribe, every tongue worshiping Jesus together. It was incredible and humbling to be a part of that. Believers were so passionate and loved the Lord so much.”

Wacter said being able to go on the mission trip was “an incredible privilege.”

“There is such a spiritual need globally, and were able to see that,” he said. “If anybody is ever on the fence about going on mission, they should get off the fence and just go.”

Wood encouraged Georgia Baptists to be in prayer for the Ukraine, specifically that its citizens open their hearts to the gospel.

“So many people there need to hear the gospel,” he said. “

The U.S. put 8,500 troops on alert for possible deployment to Europe as part of an alliance “response force" if necessary. British Prime Minister Boris Johnson also said he is prepared to send troops to protect NATO allies in Europe.

The U.S. and its allies have vowed to hit Russia with sanctions like never before if Moscow sends its military into Ukraine but they have provided few details, saying it’s best to keep Putin guessing, the AP reported.

The U.S. State Department has ordered the families of all American personnel at the U.S. Embassy in Kyiv to leave the country.

In Ukraine, however, authorities have sought to project calm in order not to destabilize the situation and avoid panic, the AP reported, and many citizens have expressed skepticism that there will be an invasion soon.

In parliament, Defense Minister Oleksii Reznikov said that “as of today, there are no grounds to believe” that Russia is preparing to invade imminently.

Moscow has rejected Western demands to pull its troops back from areas near Ukraine, saying it will deploy and train them wherever necessary on its territory as a necessary response to what it called “hostile” moves by the U.S. and its allies.