JESUP — A Georgia Baptist who gave his life to save a co-worker in the San Bernardino, CA mass shootings was laid to rest here Dec. 12 at Calvary Baptist Church.

Shannon Johnson has been hailed nationally as a hero in the massacre when he tightly wrapped his arms around wounded Denise Peraza and said, in a hail of flying bullets, “I got you.” More than 200 persons filled the church in Altamaha Association where Vann Dempsey is pastor. 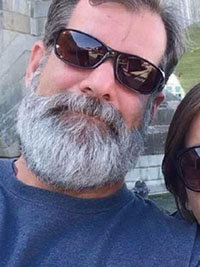 Johnson, 45, was born and buried in the South Georgia town about 2,300 miles from the site where he and 13 others were gunned down in the nation’s deadliest terrorist attack since 9/11. Another 22 individuals were injured.

The two shooters – husband and wife Tashfeen Malik and Syed Rizwan – were gunned down shortly afterwards in a high-speed chase.

The mass shooting occurred on Dec. 2 during a holiday party for 80 San Bernadino County Department of Public Health employees. The event was being held in an auditorium at Inland Regional Center.

Media accounts described how Johnson died like his father – who was also hailed as a hero – for attempting to save the life of a co-worker injured in a pulp-mill shutdown as Western Kraft in Hawesville, KY. Both father and son are now buried side-by-side in Jesup City Cemetery.

Peraza, who survived the San Bernardino shooting, though wounded, called Johnson both a friend and a hero. They were seated next to each other when the attack began.

Those were his last words.

Johnson had been employed for 11 years in the same profession as one of the shooters – as a health inspector for the same county. They were co-workers in the same department.

Channel 11 News in Atlanta reported that Johnson graduated from Windsor Academy, a private school in Macon, in 1988. Before that he attended Briarwood Academy in Warrenton, west of Augusta for two years where he was a decorated athlete who played football, track, and baseball.

He drove 18-wheelers for several years on cross-country routes. Then, the NBC-affiliate added, he went to college and earned a degree. In February 2005 he went to work as an environmental health specialist for the San Bernardino County Public Health Department