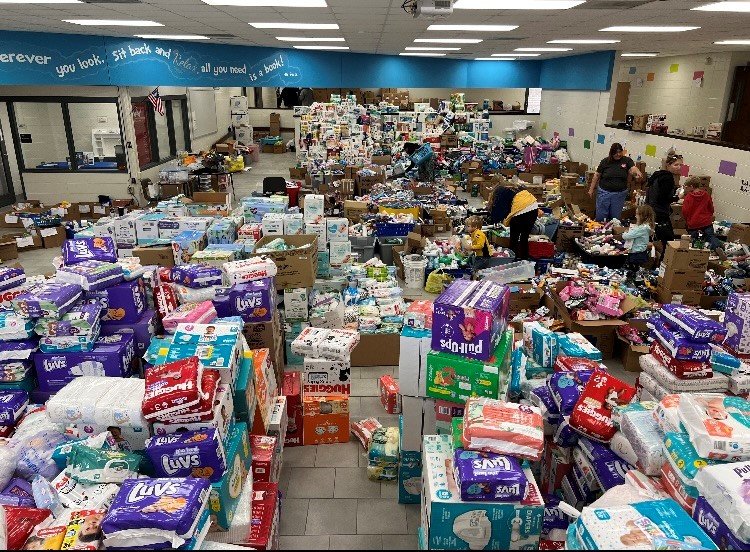 Georgia Baptist volunteers provide a look inside a Polish warehouse that is stacked with donated goods for Ukrainian refugees. 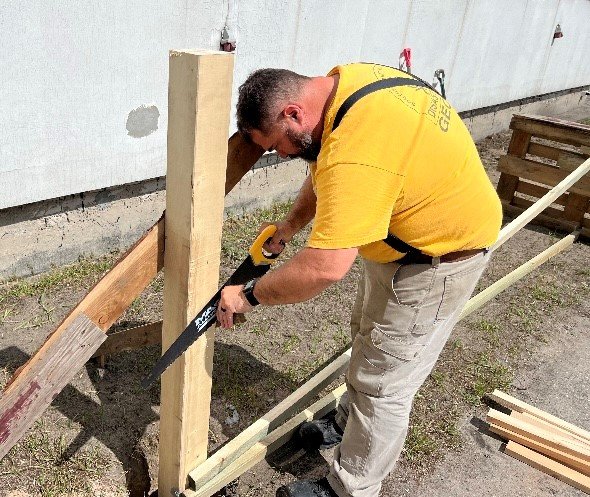 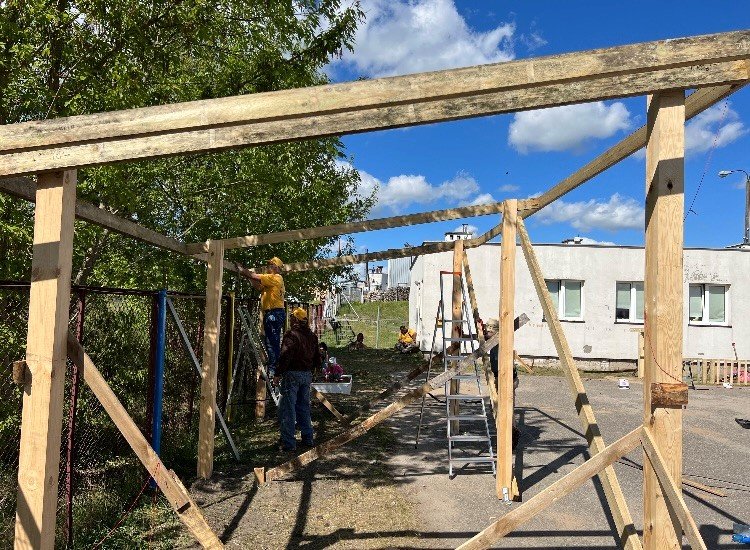 Volunteers from Georgia build a shelter in a Polish camp for Ukrainian refugees.
Previous Next
Posted Thursday, May 12, 2022 2:40 pm
By ROGER ALFORD, The Christian Index

Members of a Georgia Baptist Disaster Relief team are drawing on a variety of skills to help Ukrainian refugees who made their way to safety in Poland after the Russian military invaded their country.

“Everybody on this team is trained in multiple disciplines, and they’re willing to do whatever is needed to  improve the lives of the refugees,” said Bob Sprinkel, leader of the five-man crew that arrived in Poland earlier this week.  “If there’s trash needing to be picked up, they pick up the trash. If there’s construction to be done, they’re doing construction. Whatever is needed, this group can do it. They have the skills, and they have the mindset: ‘Here I am; send me.’ They’re ready to serve Christ wherever and whenever Christ wants them.”

The Georgia Baptist Disaster Relief workers, typically called on to help in the wake of natural disasters, are about halfway through a 10-day deployment to Poland to help Ukrainian refugees caught up in a humanitarian crisis caused by the Russian invasion.

The Georgia Baptists involved in the Poland deployment are some of the state’s most experienced Disaster Relief volunteers. Sprinkel is serving with Darrell Barrett of Hiawasee, Q Mercer of Port Wentworth, Tim Beck of Toccoa, and Larry Green of Cairo.

All have been part of a wide variety of deployments over the years.

Nearly 5.5 million Ukrainians, mostly women and children, have fled Ukraine since Russia invaded its smaller neighbor on Feb. 24, according to the U.N. High Commissioner for Refugees.

The majority of the refugees went to Poland, where the Georgia Baptists are doing their part to make them more comfortable.

Georgia Baptist Disaster Relief volunteers are most often deployed within the U.S., having ministered over the past year to victims of tornadoes in their home state, a major hurricane in Louisiana, and wildfires that destroyed homes in Colorado.

Georgia has a small army of trained disaster relief volunteers who stand ready to go wherever needed on short notice. In the U.S., typically they serve in chainsaw brigades to clear fallen trees from homes and property in the wake of hurricanes and tornadoes, operate mobile kitchens for storm survivors, shovel mud and carry soggy furnishing from flooded homes, set up mobile showers and laundromats for survivors and volunteers in hard-hit areas.

In Poland, the Georgia crew has put up clotheslines, built gates, constructed a shelter, and assembled tables to make the refugee camp more livable. Their primary project for the week will be to build a staircase to make it easier for refugees to enter and exit the camp.

And, while verbal communications can be difficult, Sprinkel said the English-speaking Georgia Baptists have found that smiles speak louder than words. Sprinkel said they're greeted with happy smiles each time a construction project is completed.

“Everyone on the team has multiple skills,” Sprinkel said. “We’ve gotten a lot done. We’re all about serving Christ in crisis. We’ve come thousands of miles to do that, and we’re doing what’s necessary to meet the needs of the Ukrainians refugees.”