Philando Castile, 32, was shot and killed by a police officer Wednesday night. The moments after the shooting were videoed on Facebook Live by his girlfriend, who sat in the passenger seat.
Posted Thursday, July 7, 2016 6:39 pm
Scott Barkley

Philando Castile, 32, was shot and killed by a police officer Wednesday night. The moments after the shooting were videoed on Facebook Live by his girlfriend, who sat in the passenger seat.

Cries of anger and outrage rang across social media today from the deadly shootings of two black men by police officers, with Georgia Baptists adding their opinions and concerns.

The deaths of Alton Sterling, 37, and Philando Castile, 32, came within hours of each other but soon their names and stories were being shared in tandem online along with new calls for police accountability and discussions on race. Sterling died from gunshot wounds to the chest after a struggle with officers outside a Baton Rouge, LA convenience store where he had sold homemade CDs for years. Castile’s death in Falcon Heights, MN, outside Minneapolis, came as he sat in a car with his girlfriend and her four-year-old daughter after being pulled over for a broken tail light.

In Sterling's case, officers claimed he had a gun but two separate videos don't support that assertion. Store owner Abdullah Muflahi described the beginning of the encounter between Sterling and police as peaceful until officers tasered and tackled Sterling, at which point Muflahi began videoing.

On social media, a Facebook Life video taken immediately after Castile’s shooting by his girlfriend Diamond Reynolds was shared before being taken down, then re-posted by Facebook with a warning for graphic content. In it Reynolds can be heard calmly talking to an officer as she pans to Castile’s slumping body, blood soaking through the right side of his white shirt.

Castile was a straight A student in high school who worked as a cafeteria supervisor at a Montessori magnet school. He had a minor record consisting of traffic offenses such as failure to wear a seat belt and having no insurance. In the video Reynolds can be heard explaining that Castile had told police he had a gun and license to carry it but was reaching for his driver's license and registration when he was shot.

Gabriel Stovall, pastor of Butler Street Baptist Church in Atlanta and Baptist Campus Minister at Clayton State University, wrote several posts on Facebook regarding the shootings, starting with a lengthy one that begin with "I refuse to raise my Black son in fear." The crux of the post addressed the lies Stovall vowed to not teach his son, lies he indicated are readily accepted in America and the Church regarding race. 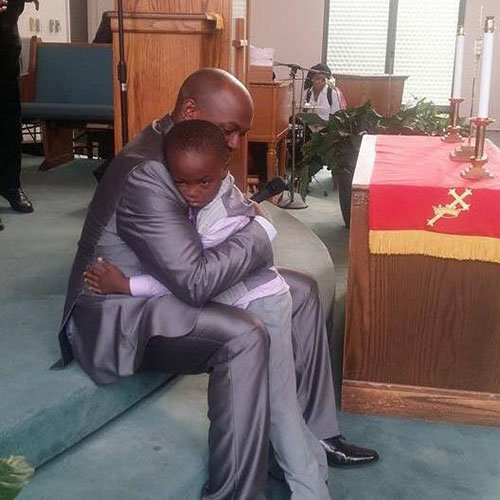 Gabriel Stovall hugs his son Micah after recently being installed as pastor of Butler Street Baptist Church in Atlanta.

"I will raise him to believe that his relationship with God through Jesus Christ is the only way to half way make sense of this mixed up, sin sick world.

"I will raise him to believe that he doesn't have to check his brain or his Blackness at the door in order to be who Christ has called him to be.

"I will raise him to believe that God will give him an assortment of true friends and brothers and sisters in Christ -- Black, White, Asian, Hispanic, Native American and everything else in between."

Other reactions brought condemnation and introspection.

"Watched the video. Disgusted that this would happen. There is no place for bigotry, racism, & hate in this country. Jesus is the answer," Allen Brown, student minister at Centennial Baptist Church in Rutledge, posted on Twitter.

"The response of social media users has and will be predictable as this case plays out. Some news organization or website will produce a picture of Castile from a few years back where he’s wearing a hoodie or a bandana or something else not deemed socially acceptable in order to prove that he was a thug who had it coming," said Sanders. "Others, under the banner of All Lives Matter, will pledge their undying support for all law enforcement ....

"If you are a Christian who cares about loving God and your neighbor, it is very important that you do not fall into these traps. We would do well to take a deep breath and evaluate ourselves for our hypocrisy."

That hypocrisy, Sanders asserted, was to pay a disproportionate amount of attention to black babies being aborted and not consider the worthiness of the lives of black men.

"Christian churches ... do a lot of work to stop abortion in this country. And that’s a good thing. But if we do not care just as much for the 30-year-old black man as we do for the black baby in the first trimester, we’re only kidding ourselves. ... Philando Castile’s life mattered. We can get away with simply talking about the baby but we have to figure out a way to actually live with and love the adult."

John Blackmon, pastor of Meansville Baptist Church, tweeted an anecdote from just a few months ago when he and his wife were pulled off the road by a police officer after attending a Gaither concert. "I was aggravated, not afraid," he said.

"Our response and our movement must be comprehensive, systemic and balanced, but most of all, consistent," he wrote. "Our approach must be one that causes a rising shift and personal investment in economics and education in Black communities. Our prayers should be spoken around the premise of 'What, God, would you have us to DO?'"