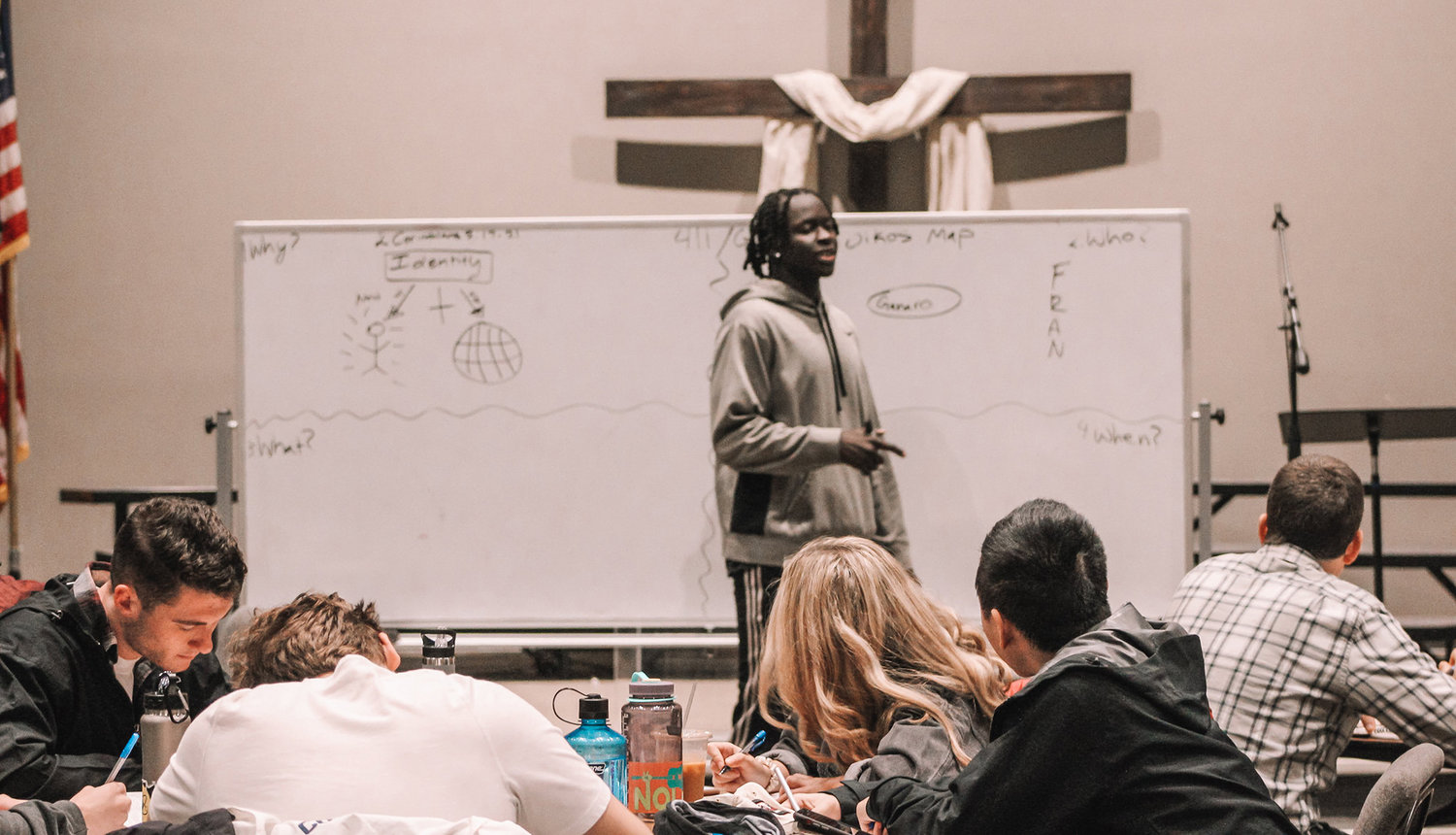 CLARKSTON, Ga. (BP) – Students from New Orleans Baptist Theological Seminary are just one of the latest groups to learn about refugee ministry while visiting a small town known for its diverse population.

Clarkston, a small town on the eastern periphery of the Atlanta metro area, is known for its resettlement program for refugees and immigrants established in the 1990s. The town came to be known as “the most diverse square mile in America,” with more than 60 countries and 100 languages represented. Clarkston International Bible Church sees its unique community as a mission field. 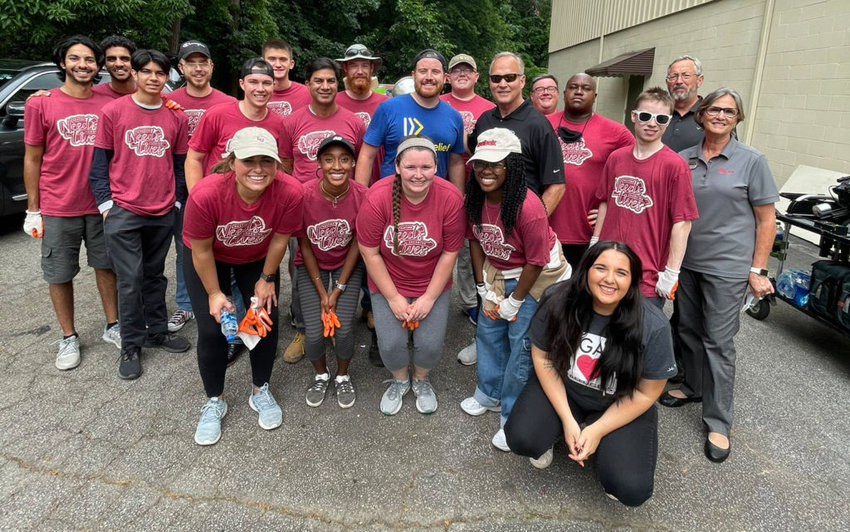 GenSend interns and Send Relief Care for Refugees Director Greg Wilton (middle) pose for a picture with Mark Richt, national spokesperson for Send Relief and former University of Georgia football coach who stopped for a visit.

Southern Baptists’ Send Relief partners with the church to teach visiting groups from a variety of churches, schools and seminaries about refugee ministry.

Greg Wilton, the Care for Refugees director for Send Relief, said that although the ministry was able to meet some needs and share the Gospel in the community in 2020, it is great to have visiting groups coming back for in-person activities.

“There are a variety of church groups that come to us that want to engage in international and refugee ministry, and that’s extremely easy to do here because that is Clarkston, we’re such a diverse community,” Wilton said. “Oftentimes ‘the nations’ are found in our own context. We in Clarkston want to be a part of the process of pushing people to the very ends of the earth.”

Groups routinely visit Clarkston to assist in ministry, with trips varying from a day or weekend to longer term like one or two weeks. Groups range from Bible school students – like the NOBTS group that visited in April, to BCMs and church groups from across the South, with age ranges from middle school to senior adult. Groups can sign up at this link on the Send Relief website.

Trips typically include a tour of Clarkston, an overview of the refugee resettlement process, an explanation of the ministry of Send Relief, evangelism training and opportunities to interact with Clarkston residents. 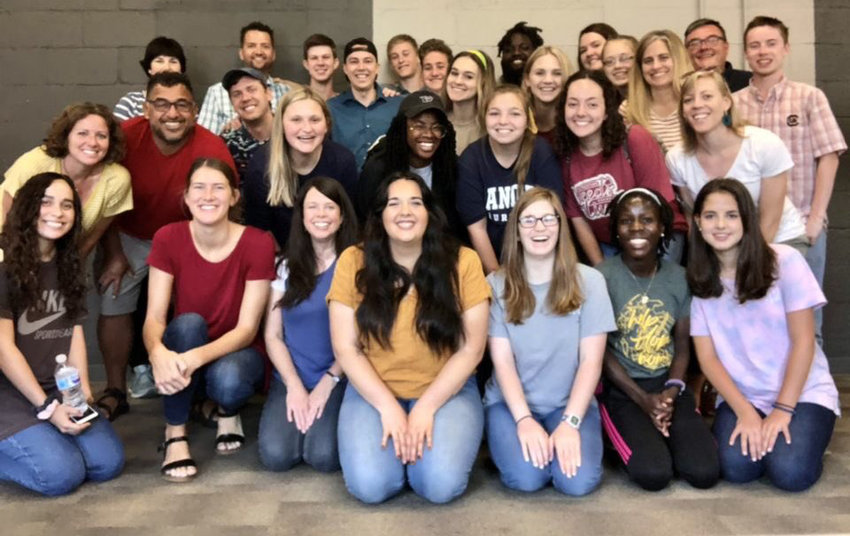 Two visiting groups, a BCM group from South Caroline and a church group, pose for a picture at CIBC.

According to Wilton, one of the keys to the ministry trips is that much of the teaching is done by Clarkston residents who are members of Clarkston International Bible Church.

The most rewarding part for Wilton is seeing the groups take some of the things they learn on the trips and apply them in order to live on mission in their own context. He estimates that CIBC and Send Relief have partnered to “mobilize,” more than 2,000 people out of Clarkston through these visiting groups in 2021 alone.

Wilton, a NOBTS alumnus, said he heard an example from a NOBTS student who, upon returning to New Orleans, identified a significant Muslim population in his own local context and began mobilizing a group of friends to minister to that group.

“What makes us most excited is seeing how they carry back certain principles that they’ve learned here in their own local context wherever they’re from, so that they can also have the joy of reaching immigrants, internationals and refugees within their own context,” Wilton said. “I’m just really glad to know all of them because they just want to do something, they want to put their faith into practice. They are taking a simple step of obedience.

“Every one of these teams, they believe in the Great Commission, and they just want to do something about it. They end up finding us because they want to make disciples of all nations.”

David Creswell serves as the Clarkston Ministry Center Coordinator with Send Relief, and helps facilitate and organize the visiting groups. He emphasized that hosting groups is for education about refugees and immigrants, but the trips are also meant to inspire people to reach the world in their day-to-day lives.

“The SBC is built around the Great Commission, and what it means to be living a life for the Great Commission,” Creswell said. “The ultimate goal of all the groups we host is to be able to inspire the church towards being on mission wherever they find themselves contextually.”

In additional to short-term trips, Clarkston International Bible Church and NAMB assist with the ministry that GenSend interns will be doing for two months during the summer. Creswell said this year’s GenSend group will get a “healthy dose of both sides of NAMB,” as they minister with refugees in Clarkston while also assisting several church plants closer to Atlanta. He said this will help students be involved with compassion and mercy ministry as well as learn how to engage in evangelism in urban contexts.

In terms of the refugee ministry with CIBC, Creswell said one of the most important parts of GenSend and all of the groups that visit is that they are able to form a personal connection with refugees instead of merely hearing about the topic on social media or in the news.

Wilton said after 2020, which he described as a tough year for churches and ministries, Christians should get involved with serving ministries somewhere as a way to help fulfill the Great Commission.