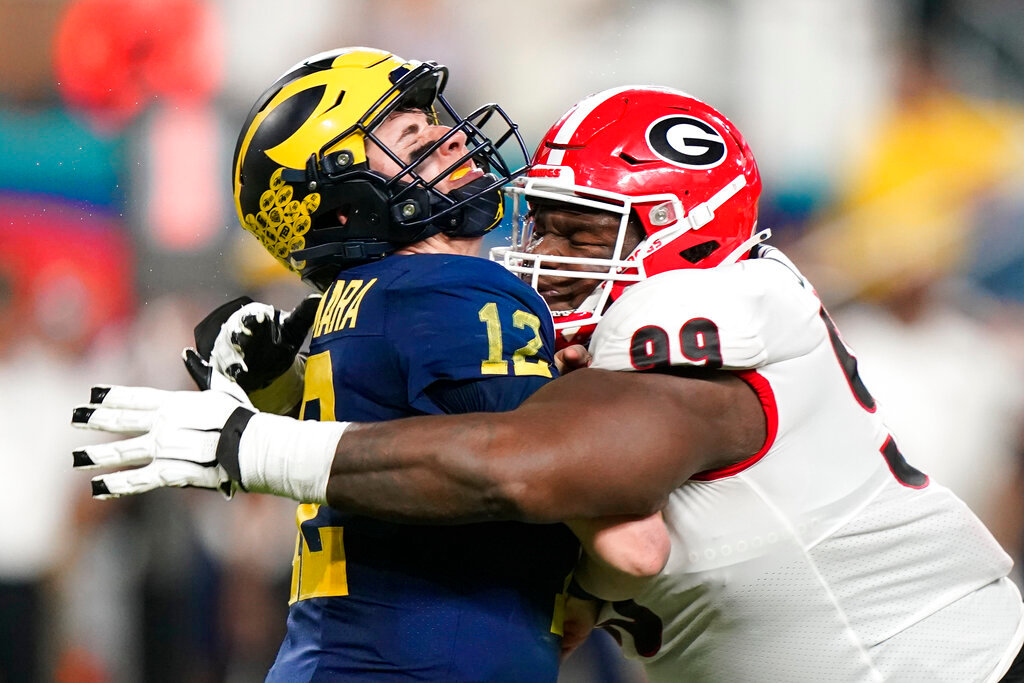 MIAMI GARDENS, Fla. (AP) — With one overwhelming half at the Orange Bowl, No. 3 Georgia showed that a humbling loss to Alabama did not break the Bulldogs.

In fact, it might have made them even stronger.

“Answered a million questions about our team, bouncing back and how you play,” Georgia coach Kirby Smart said. "We’ve got a lot of high-character guys on this team and they played their tail off today.”

Georgia (13-1) earned a rematch with Southeastern Conference nemesis Alabama (13-1) in the title game Jan. 10 in Indianapolis.

It was 27 days ago the Crimson Tide rolled through the Bulldogs, shattering their air of invincibility after a 12-0 regular season in which they were hardly challenged.

“All our guys did was work,” Smart said about how they responded to the loss.

If there was any question about whether the damage from that 41-24 setback would linger, the Bulldogs answered them quickly.

Georgia became the first team in the eight-year history of the CFP to score on each of its first five possessions and led 27-3 at halftime.

“We knew we were better than what we showed that last game,” Bennett said.

Michigan (12-2) entered its first playoff appearance off a milestone season, having ended a long drought against rival Ohio State on the way to winning the Big Ten.

The Bulldogs most certainly did, playing like a team out to prove a point.

Georgia scored touchdowns the first two times it had the ball, moving it at will against Heisman Trophy runner-up Aidan Hutchinson and the Michigan defense.

Georgia grabbed a two-touchdown lead, hitting Michigan with some of the trickery the Wolverines have used so well this season. Tailback Kenny McIntosh swept to the right and let loose a perfect pass to Adonai Mitchell for an 18-yard TD that made it 14-0 less than five minutes into the game.

The Wolverines had rolled to their first Big Ten championship since 2004 without trailing by as many as seven points this season.

The Bulldogs tacked on field goals on their next two possessions and Bennett connected on a 57-yard touchdown pass to Jermaine Burton streaking down the sideline to make it 27-3 with 1:38 left in the half.

And that was was pretty much that. The Bulldogs dominated in every way, outgaining the Wolverines 330-101 in the first 30 minutes.

The Georgia defense that was setting an historic pace, allowing less than a touchdown per game, before getting shredded by Alabama, smothered a Michigan offense built to bully opponents.

The Bulldogs were having none of that.

Dean, the Butkus Award-winning linebacker, was diagnosing plays before the snap and chasing down ball carriers from sideline to sideline.

Massive nose tackle Jordan Davis was collapsing the middle of a Michigan offensive line that won the Joe Moore Award as the best in the country.

Cornerback Derion Kendrick has two interceptions and was the defensive player of the game.

The Wolverines finished with 88 yards rushing after coming in averaging 223 per game. Cade McNamara was 11 for 19 for 106 yards passing.

Simply, it was no contest and now the Bulldogs will get a shot at redemption against Alabama, trying to win their first national title since 1980.

All the stands in the way is the most accomplished dynasty in the history of college football, the rivalry that Smart, a longtime Nick Saban assistant at Alabama, has tried to model his program after.

Georgia opened as 2 1/2-point favorite, according to FanDuel Sportsbook.

Georgia: There were plenty of questions about whether Bennett should remain the Bulldogs' starting quarterback after he threw two interceptions against Alabama. Georgia fans wondered if it was time to make the switch back to USC transfer JT Daniels, who was QB1 to start the season before an injury opened the door for Bennett.

The former walk-on completed his first nine passes against Michigan on the way to 307 yards and showed more than enough arm strength on a 53-yard bomb to James Cook in the second quarter. Bennett was named offensive MVP.

Michigan: The 2021 season will provide plenty for the Wolverines to look back upon fondly. The Orange Bowl showed that closing the gap on Ohio State is one thing, but there are two teams currently at the top of college football in an entirely different class as the rest.

“This is the stare,” Harbaugh told ESPN afterward. “In Michigan history, it is one of the best teams ever.”

Georgia: The Bulldogs will face Alabama for the second time in the CFP title game. The Bulldogs have lost seven straight against the Tide, including the 2017 championship game in overtime.

Michigan: The Wolverines open the 2022 season at home against Colorado State.