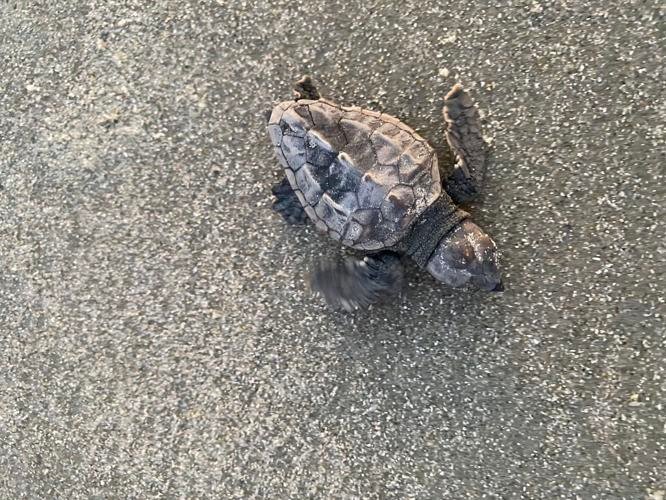 A sea turtle hatchling crawls across a St. Simons beach. 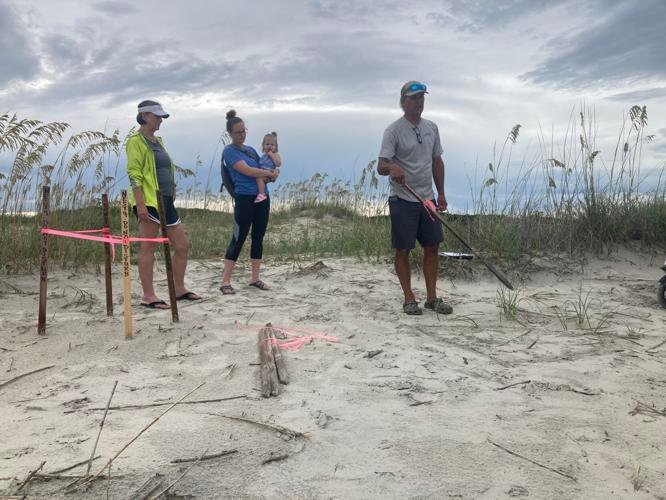 ST. SIMONS, Ga. - On a recent warm and clear evening on Coast Guard Beach on St. Simons, as beachgoers lounged in the sand and waded into the waves, a group of volunteers circled around the island’s most recently hatched sea turtle nest.

The nest was perched on the edge of the dunes and almost one week earlier had been the exodus site of more than 100 hatchling turtles.

The volunteers gathered there now had also been among the first to find the nest when it was laid in May and had watched closely during July for when it hatched.

The St. Simons Island Sea Turtle Project is a group of more than a dozen volunteers monitoring the nesting season on St. Simons in collaboration with teams that track nesting across Georgia’s coast.

So far this year, St. Simons has had 12 nests. Across Georgia, at least 3,977 sea turtle nests have been counted, which surpasses the record set in 2019.

As Dodd spoke, a few volunteers worked carefully behind him to dig through the latest hatched nest and calculate the number of eggs and the number of dead hatchlings. They also looked for any living hatchlings that didn’t make it out.

Dodd explained the best practices for monitoring the hatchlings on the beach. The volunteers walk the beach every morning looking for turtle tracks, as do volunteers or conservation workers on all of Georgia’s barrier island beaches.

“We do not call it a hatch unless we see hatchling tracks,” Dodd said. “A lot of y’all have been around a long time and you know what it looks like.”

Numerous pieces of important data need to be recorded with each nest, including the date of hatch, the number of incubation days, and the number of hatchlings that made it out.

“This one hatched actually at 55 days,” called out Catherine Ridley, a volunteer with the SSI Sea Turtle Project.

After a nest hatches, Dodd said it’s important to wait five days before excavating its contents and getting the needed data.

It’s best for that imprinting process to take place as naturally as possible, he said.

“Most of the hatchlings emerge that first night, the main first emergence, but we often have hatchlings coming out for three or four days afterward,” Dodd said. “The morning it hatches is day zero, and then we do the inventory on day five.”

This data about the nest is sent to the University of Georgia, where scientists keep track of the site fidelity of nesting turtles, their nesting numbers, and more.

“That data you collect there is what we’re using to determine how many hatchlings are produced each year,” he said. “We have this huge population model, this big demographic model, and every year we have inputs … Over time we have a pretty good estimate of what the survival is each year.”

After doing the nest inventory, all of its contents are returned and reburied to provide nutrients for the growth of dune stabilizers.

Dodd also showed the volunteer team how to look for misoriented hatchlings that for whatever reason strayed from the direct path to the ocean they need to take to have the best chance of survival.

“Generally when hatchlings emerge their primary cue is temperature,” Dodd said. “They come out, they go to the lightest point of the horizon.”

Any hatchling tracks that fall outside of 45 degrees from the center line from the nest to the beach may have been misoriented.

A couple of years ago, a large group of hatchlings from one nest emerged and went back toward the dunes, Ridley said.

Lighting at homes, hotels, or businesses near the beach can cause hatchlings to go the wrong way. The St. Simons volunteer team is among many in the community advocating for improved lighting ordinances to protect nesting on the island. Glynn County is undergoing a zoning update now.

The data collection efforts are part of a push for improving lighting ordinances, as the numbers can be used to demonstrate the problem to county officials should another large misorientation event occur at a nest.

“The problem with all of this misorientation and the reason we’re concerned about it is hatchlings, when they emerge from the nest they absorb the yolk that’s left and the egg,” Dodd said. "That’s their energy reserve they have to use to try to get offshore.”

When the hatchlings go the wrong way, they waste their energy resources.

Jekyll Island has a strong lighting ordinance in place, he said, but there’s work to do to improve the protection on St. Simons.

The team on St. Simons may be smaller and track fewer nests, but they’re part of a statewide effort to protect the turtles’ future survival.

“We may not have the most nests on the coast but what we do with those nests I think is really valuable,” Ridley said. “A lot of our folks come from different islands where they have a great deal of experience not just in finding nests but also in monitoring nesting activities and educating the public.”

Georgia surpassed its 2019 nesting record over the weekend by going over 3,950 nests. While this is a reason to celebrate, Ridley said, it’s important to maintain strong protections in the years ahead. The population is expected to plateau at current levels for the next 20 years before it begins to increase back to historic levels.

“All of the data that we collect has been used to create a loggerhead population model, and the model shows the anticipated predictions of the population over time,” she said. “What it’s showing us is that the population will plateau for the next 20 years or so and we will not have these continuing increases for some time.”

To even maintain the current population over the next two decades, she said, the state has to keep protections in place, including strong lighting ordinances, winter dredging windows, and more.

“We can’t take our eye off the long-term conservation goal that we have,” Ridley said.