Getting man and child out of their own creation, and into God's 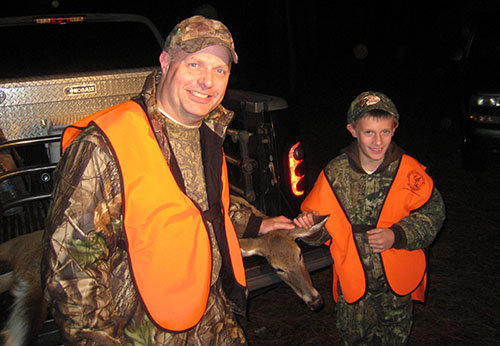 Mark Strange, state missionary in GBC Communication Services, stands with his son Logan, 9, who got his first deer on one of the Father/Son Hunts offered through Legacy Outdoor Ministries. LOM/Special

Kyle Woodfin's childhood growing up in Floyd County was consumate boy in terms of getting outdoors. Whether it was hunting rabbits with dad or quail with granddaddy, Woodfin developed an early love for wildlife and conservation that would later become the fabric of his ministry.

In 1993 Woodfin became pastor of First Baptist Church in Helen and during his time there established Georgia Mountain Resort Ministries through the North American Mission Board. "Through that an idea around recreation ministries began to grow," he says. "I met a guy in North Carolina who had a golf ministry and that got me to thinking even more."

On Jan. 1, 2000, as the rest of the world held its collective breath about Y2K, Woodin and his wife Alanna took their own leap of faith in establishing Legacy Outdoor Ministries. In April of that year he became bivocational pastor at West End Baptist Church in Manchester, which helped provide the funding to develop LOM while serving as a Mission Service Corps missionary through NAMB. In addition to managing LOM, Woodfin has been pastor of Alamo Baptist Church in Wheeler county for seven years.

Not too long after establishing his outdoors ministry, Woodin's experience as a father led him to realize the importance of establishing father/son hunts and later, for fathers and daughters.

"As my children came along and I went into the woods with them, it became more apparent how self-discipline, work ethic, the importance of wildlife conservation, and even respect for life itself was instilled in me. I learned a lot of life lessons through hunting and being outdoors, which instilled qualities in me about being a man.

"I also began to realize that too many young people are missing out on those experiences. Most kids today grow up with an urban mindset and don't know how to enjoy the outdoors."

This weekend Legacy will host its annual Father/Daughter hunt. The Father/Son hunt will be Nov. 6-8. "We go hunting where there's a very weak cell signal, and no wifi" he says. "The kids quickly learn to play in the woods and soon doesn't matter. A lot of dads and their children tell me this is their favorite time of the year.

"When you get a man out of his man-made world and into God's created world, it's a lot easier for him to connect with God. That's the same with the kids."

Including Scripture is mandatory, but for fathers who may be new to being spiritual leaders, placing them in a familiar setting helps them establish that role. Woodfin leads group devotions at night, but dads do their own in the deer stand with their children at the beginning of the hunt. "Combining those worlds (hunting and spiritual leadership) allows those dads to speak their language," adds Woodfin.

A quail hunt for fathers and sons is slated for February. That month Legacy will also host a two-day quail hunt for ministers. Plans are being made for another ministers retreat hunting turkey in the spring.

Occassionally Woodfin hears from those who object to hunting, particularly in a ministry context. "I go back to Genesis where God told Adam to be a good steward of creation. Hunting is very important in managing the wildlife population and keeps nature in balance." 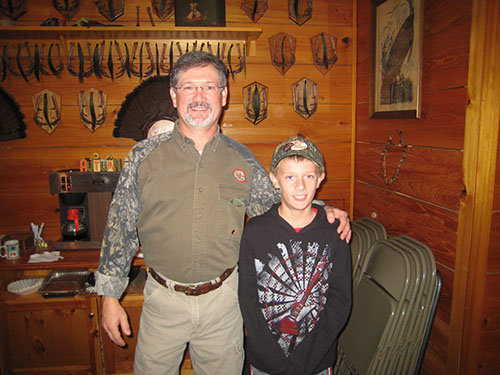 Woodfin was likely referring to 1 Kings 4:22-23, where King Solomon's daily provisions included numerous animals including deer when he said, "Also, venison is very healthy. I read in the Bible where Solomon ate it every day. If the wisest man in the world did that, we should too.

"Something else I always point out is how hunting really teaches kids responsibility of life and death. This isn't a computer game, and when they pull the trigger they know it's for real. Hunting helps them develop an appreciation for the fragileness of life."

Over the years, more boys would express to Woodfin how they'd like to hunt, but had no one to take them. "We felt there should be a ministry to those boys," he points out. "We've had a really good response to it and the men who take part love it. For those boys, this is their only time of the year to be out there."