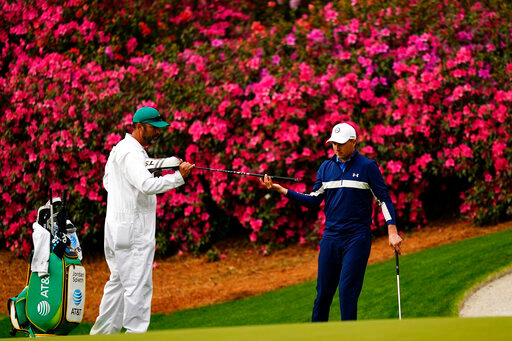 Jordan Spieth gets a club from his caddie on the 13th hole during a practice round for the Masters golf tournament on Tuesday, April 5, 2022, in Augusta, Ga. (AP Photo/Matt Slocum)
Posted Wednesday, April 6, 2022 8:14 am
By TIM DAHLBERG

If their motivations this week at the Masters are similar it shouldn’t come as much surprise. The two close friends have been chasing the same golf dreams since they were teenagers trying to beat each other in junior golf.

At the moment Spieth holds the bragging rights. But it was Thomas who flew in the private jet with Tiger Woods last week to play a practice round at Augusta National to make sure all the boxes were checked in his quest to win a green jacket of his own.

And it was Thomas who teed off Monday for nine holes with Woods and Fred Couples that had fans screaming like it was Sunday afternoon with everything on the line.

“It was unbelievable. I think I honestly didn’t think as much of it until I saw it,” Thomas said. “I had a couple buddies send me some pictures last night, and that’s probably more people than have ever watched me play a round at Augusta National, and they weren’t there to watch me.”

That could change should Thomas overcome putting issues that have plagued him in six previous Masters appearance, the best of which had him finishing fourth in the only November tournament in Masters history. He ranked 10th in the field that year in putts per round, the only time he finished in the top 10 in that category on the tricky and very speedy greens.

He’s also been up close and personal on the course with Woods, who knows every inch of it and how to play every shot he might encounter. He’s the closest friend on the tour with Woods, who considers Thomas much like a little brother.

“I’m not necessarily asking him a lot of specifics about here,” Thomas said. “When I’m asking him stuff at home, I’m just — it’s just like I would ask Jon Rahm a question or ask Jordan a question. I feel like Tiger’s been a good person for me to do that. But, yeah, I guess I’m very fortunate in that regard.”

Thomas wasn’t specific, but the questions to Spieth probably revolved more around putting than they did sizing up a green jacket. Thomas has always admired Spieth’s putting, which always seems to go up a level once he gets to the Masters.

“He’s got the best speed of putter I think I’ve ever seen,” Thomas said. “You look at all his putts, especially all of his midrange putts, every single one of them goes in with the exact same speed. They don’t hit the back of the hole. They’re probably going to go anywhere from 6 to 12 inches past the hole. I don’t think people realize how hard that is and how good that is to consistently do that every single time.”

That putting paid off in 2015, when Spieth needed only 27 putts a round to win the Masters, a year after finishing second in his Masters debut. He followed it the next year with another second place finish that would have been better had he not imploded with balls into Rae’s Creek on No. 12.

He’s finished third or better in five of his eight Masters, a remarkable feat but one that left him wanting more.

Spieth feels good about his chances to change that this week and, surprisingly enough, his putter isn’t the reason. He’s rebuilt his swing after struggling in recent years and believes he is striking — and shaping — the ball better than at any time in his career.

That helped get him in contention in the Valero Texas Open last week, where any chances of a top finish evaporated because he couldn’t adjust to the speed of the greens. That shouldn’t be a problem on Augusta National greens that by the weekend will be as fast as ever.

And that is just how Spieth likes them.

“I’m very confident this week, even if results over the last month or so haven’t been what I was looking for,” Spieth said. “I feel like my game is in a lot better place than even it was last year here.”

Both Spieth and Thomas also feel they have an added advantage because they have caddies who know the course well and have carried the winner’s bag before. In Spieth’s case that is Michael Greller, the only caddie he has ever had, while Thomas lured Jim “Bones” Mackay from the broadcast team to caddie for him full time this year.

Mackay was the longtime caddie for Phil Mickelson, teaming with him to win three Masters.

“He obviously knows the course amazingly, and I feel like I know the course very well, too. It’s just about going out and doing it at that point,” Thomas said. “Hopefully we can create a little bit of the success he’s had here.”

If that happens, Thomas should be in contention on the back nine on Sunday.

The only thing better would be if his friend joins him there.