Georgia Governor Brian Kemp signs the LIFE Act, making abortion illegal after a baby's heartbeat is detected and Georgia a leader in the country for the pro-life movement. GOVERNOR'S OFFICE
Posted Tuesday, May 7, 2019 5:21 pm
Scott Barkley

Georgia Governor Brian Kemp signs the LIFE Act, making abortion illegal after a baby's heartbeat is detected. It's passage makes Georgia a leader in the country for the pro-life movement. GOVERNOR'S OFFICE/Special

ATLANTA — With the signing of House Bill 481, the LIFE Act, Governor Brian Kemp simultaneously provided security for unborn babies otherwise bound for death while enraging a pro-abortion contingent determined to fight the law’s presupposition that life, indeed, begins in the womb.

“As you all know, Georgia is a state that values life,” Kemp said in the Governor’s Office prior to the signing. “We protect the innocent; we champion the vulnerable; we stand up and speak for those unable to speak for themselves.”

The bill, sponsored by Rep. Ed Setzler (R-Acworth) and Sen. Renee Unterman (R-Buford) takes effect Jan. 1, 2020. With it abortions in Georgia are illegal once a heartbeat is found in a baby in the womb, usually around six weeks. The signing of the bill today makes Georgia a leader in the pro-life movement and one of the most restrictive states on abortion in the country.

The standard that all life is valuable 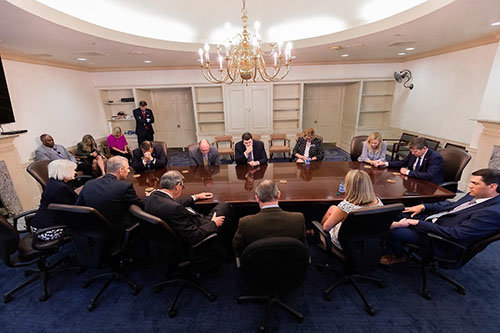 “It is hard to find words to express the appreciation that Georgia Baptists have for Governor Brian Kemp for signing House Bill 48,” said Georgia Baptist Public Affairs representative Mike Griffin. “His leadership, along with Representative Ed Setzler and Senator Renee Unterman, has been extraordinary. All Georgians have many reasons to thank the Lord for this legislation and for the legislators who were willing to put it all on the line to see it passed!

“There is no doubt in my mind that this is the most meaningful and impactful piece of legislation passed in my 12 years of lobbying at the Georgia State Capitol. As Georgia Baptists we know that this legislation reflects our values as a denomination regarding the Biblical standard that all life is valuable because it is created in the image of God and is worthy of protection under our constitution.”

Georgia Baptist Executive Director W. Thomas Hammond, Jr., who was in the signing room with Griffin, reflected on the bill’s impact not just on the lives saved, but its ripple effect culturally.

“I thought about how it’s going to affect Georgia,” he told The Index. “Before the signing I saw a quote by Ronald Reagan. It said: ‘We cannot diminish the value of one category of human life – the unborn – without diminishing the value of all human life.'

“This also calls on Georgia Baptists to answer those critics who say this law will result in unwanted children. It’s one thing for us to tell a pregnant woman to not have an abortion. It’s another for us to step up beside her and help. There needs to be a greater emphasis on us engaging in foster care, adoption, and similar aspects of our society to be impacted by this law.”

‘Protect life at all ages’

Echoing Hammond, Kemp continued the call for all Georgians to value life at whatever age. 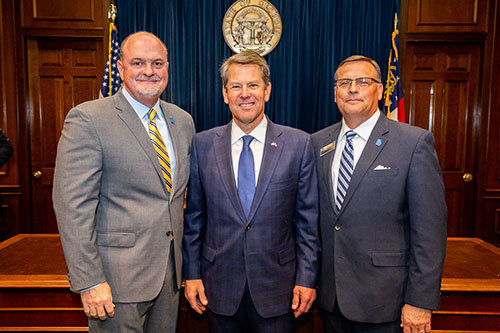 “Today is just the beginning, folks,” he asserted. “We have too many children who are stuck in foster care. The adoption process, while we have made great strides in Georgia, we have more to do. It’s still too expensive and too cumbersome for Georgia families. The elderly are being exploited and abused in communities throughout our state and our nation. Countless victims of human trafficking remain in the shadows.

“They deserve justice. That is why we must all continue to fight. We must protect life at all stages. We must remember our higher calling, and we must remember to work in the days, months, and years ahead as we have done this year.”

An answer to Roe v. Wade

In a press conference afterwards, Setzler agreed with Kemp’s description of the LIFE Act as a “common sense” bill.

“As we’ve been through this process, it’s been very inspiring for me to hear the support form all backgrounds, different parties, different faiths (or no faith) on this issue. … It’s medically sound and built on a solid legal foundation. I think the people of Georgia ­– once the shrill attacks of the opponents fade into the background – the common sense of Georgians will kick in and recognize the common sense measure [in it].”

Unterman responded to critics’ citing Georgia’s high infant mortality rate as a way of stating the LIFE Act was misplaced. Answering that through a movement to address infant mortality rate, particularly in southwest Georgia, Unterman reported that $91 million procured by Kemp would soon be directed to that issue.

“We always have line items in the Georgia that revolve year after year. This is ‘brand new’ money that is targeted," she said. "I have it documented line by line.”

The bill, Setzler further pointed out, differentiates from similar pro-life legislation passed in other states. It also answers a key question pushed from the Roe v. Wade decision.

“In Georgia not only do we recognize that children with a heartbeat are worthy of protection from abortion, but we lay the foundation of personhood. … It lays that solid legal foundation the Roe v. Wade decision tells us.

“If you read that decision and listen to oral arguments, the Roe court said if any state establishes the legal personhood of the unborn child, the logic for abortion on demand collapses. We’ve answered the precedent.”