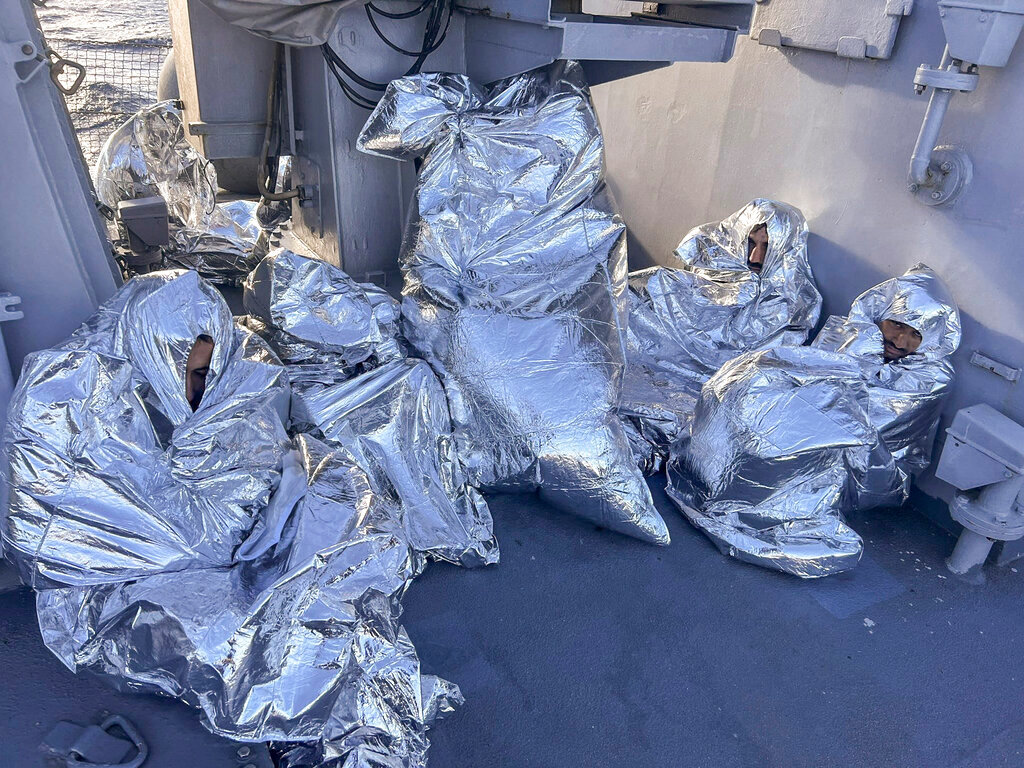 Some of the nine men who survived a shipwreck and were found on an uninhabited islet are covered with thermal blankets as they sit aboard a Greek Coast guard vessel, in the Aegean Sea, Greece, on Tuesday, Nov. 1, 2022. (Greek Coast Guard via AP)
Posted Wednesday, November 2, 2022 9:27 am
By ELENA BECATOROS, Associated Press

ATHENS, Greece (AP) — Rescue crews searching for dozens of migrants missing at sea for more than a day after a sailing boat sank off the coast of a Greek island, have found another person alive, the coast guard said, bringing the total number of survivors to 12. The number of missing is 55.

A coast guard helicopter spotted the man in the sea on Wednesday, more than a day after the sailing boat reportedly carrying 68 people capsized and sank in rough seas between the islands of Evia and Andros, in the notoriously treacherous Kafireas Strait

The man, whose nationality wasn't immediately known, was picked up by a coast guard patrol boat and was to be transported to the town of Karystos in Evia, where the other 11 survivors, all men, had also been taken. They included six Egyptians, three Afghans and two Iranians, authorities said.

The coast guard also recovered the body of one man on Wednesday, the only confirmed fatality from the sinking. The first group of survivors, who were picked up from an uninhabited islet in the early hours of Tuesday, had said there had been 68 people on board the sailing boat, which had departed from Izmir, Turkey.

A separate search and rescue operation also continued for a third day in the eastern Aegean off the island of Samos, which lies near the Turkish coast, for seven people still missing after a dinghy reportedly carrying 12 people capsized on Monday. Four people, who the coast guard said were all Palestinians, were rescued on Monday and one body was recovered on Tuesday.

Greek Shipping Minister Giannis Plakiotakis, who is also responsible for the coast guard, slammed Turkey on Tuesday for allowing “ruthless smuggling rings to send people to their deaths, with Greece saving as many as it can.”

Thousands of people fleeing conflict and poverty in Africa, Asia and the Middle East attempt to enter the European Union through Greece each year.

Most make the short but often perilous crossing from the Turkish coast to nearby Greek islands in inflatable dinghies. Others opt to attempt to circumvent Greece in overcrowded sailboats and yachts heading straight to Italy.

At least 27 people drowned in two separate incidents last month. In one, 18 people died when a boat that had set sail from Turkey sank off the eastern Aegean island of Lesbos. In the other, a yacht carrying about 100 people sank in a gale, killing at least nine and leaving six missing.