He's back! Acuña returns to Braves after major knee injury 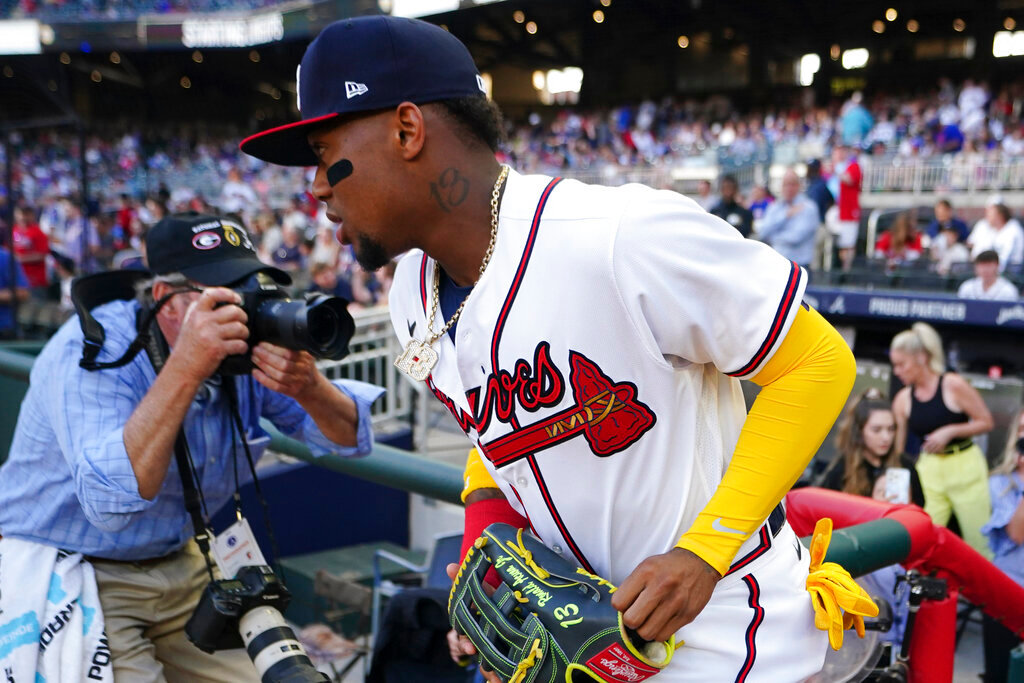 ATLANTA (AP) — Ronald Acuña Jr. was playing the “Call of Duty" video game when he got an unexpected FaceTime call at 1 a.m.

Not another rehab game in Triple-A, mind you.

Anthopoulos was talking about a return to the big leagues.

One of baseball's most dynamic players came off the injury list Thursday, a week ahead of schedule and less than 10 month after he sustained a major knee injury.

Acuña was immediately inserted into the Braves lineup, taking his familiar leadoff spot and playing right field against the Chicago Cubs. He received a big ovation from the Truist Park crowd as he headed to right, and another standing ovation when he batted for the first time in the majors in 292 days.

Acuña failed to get a hit in his three at-bats against former teammate Drew Smyly, though he did collect a stolen base on the back end of a double steal after reaching on a force-out. In the field, he made a nice play on a carom off the right-field fence to hold Jason Heyward to a single.

“It really was a long, difficult process,” Acuña said before the game. “I'm just really excited to be back.”

The Braves are certainly excited to have him back. The reigning World Series champions are off to a sluggish start, winning just eight of their first 19 games and already falling 5 1/2 games behind the NL East-leading New York Mets.

Acuña was one of the league's leading MVP contenders when he completely tore the ACL in his right knee last July 10 when he landed awkwardly while attempting to make a catch on the warning track at Miami's Marlins Park.

“What he can do offensively, defensively, on the bases, he's a game changer,” said third baseman Austin Riley, who was one of the players who came up big for the Braves after Acuña went down. “To have him back in the lineup is huge.”

Acuña had tears in his eyes when he was carted off the field in South Florida.

He was nothing but smiles Thursday, arriving at the ballpark wearing a yellow Atlanta Hawks jersey with Trae Young's name and No. 11 on it.

Young was one of the athletes who texted Acuña to wish him well in his return to the Braves.

It was initially thought the Braves would limit Acuña to designated hitter duties early in his return, lessening the chances of reinjuring the knee, but his performance at Triple-A Gwinnett eased any concerns.

Acuña was 2 for 5 in his final game of the rehab stint Wednesday night and hit .368 with three stolen bases in six Triple-A games.

“He's done everything," manager Brian Snitker said. “He's stolen bases, he's diving back into bases, he's sliding, he's made plays in the outfield There's no limitations at all.”

The only concession to the injury will be Acuña's schedule. He won't play on days the Braves travel, and he won't play day games after night games. Also, he'll be restricted to right field when he plays the field — no more center field, at least for now — and the universal DH gives the Braves some flexibility to keep him in the lineup without having to pick up a glove.

Snitker said the current plan is to give Acuña regular days off until he's a full year removed from the injury in July.

Of course, that could change if he experiences no setbacks. Already, his projected return to the Braves was pushed up from the May 6 date the team initially set.

Even if he's not able to play every day, Acuña's mere presence should be a huge boost to the struggling Braves. He's a two-time All-Star who won Rookie of the Year honors in 2018 and followed up with 41 homers, 101 RBIs and 37 stolen bases in 2019.

Acuña was on the way to another stellar season when he tore up his knee, which meant he could only watch as the Braves — after spending much of the season under .500 — improbably captured their first World Series title since 1995.

He is eager to be part of a championship on the field.

“It motivates me for this year, and will motivate me for years to come,” Acuña said through interpreter Franco Garcia. “Obviously, it's not the same being able to play in the World Series as it is to just watch it from the dugout nursing an injury. That's obviously the dream that every kid has growing up, wanting to play in a World Series."

He added, confidently, "There will be more World Series to come.”

If anything, Acuña's feels he's gotten even faster than he was before the injury. He hopes to be even more of a threat on the basepaths.

“Throughout the entire rehabilitation process, there was an added focus on my legs and developing those muscles," he said. "I think I can add speed there. I'm coming in with the intention of running a little bit more.”

The Braves designated outfielder Alex Dickerson for assignment to clear a spot on the active roster.

The decision to reinstate Acuña could have been motivated by losing Eddie Rosario for eight to 12 weeks. Rosario, the MVP of the NL Championship Series last season, had a laser procedure on Wednesday to correct blurred vision and swelling in his right eye.

The Braves went into the finale against the Cubs looking for their first series win of the season.

For Acuña, it starts now.