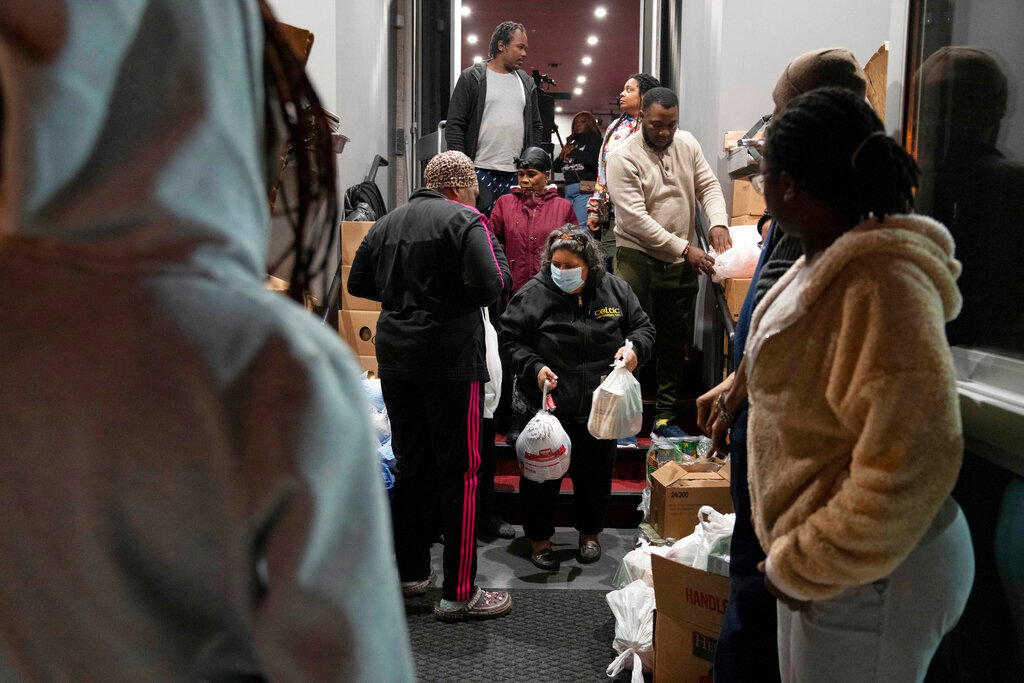 Maria Correa, of Washington, center, who says she is sick with cancer, cannot work, and that things are especially difficult because of the pandemic, accepts a turkey and Thanksgiving trimmings during an annual Thanksgiving food giveaway at The Redeemed Christian Church of God New Wine Assembly, Tuesday, Nov. 22, 2022, in Washington. (AP Photo/Jacquelyn Martin) 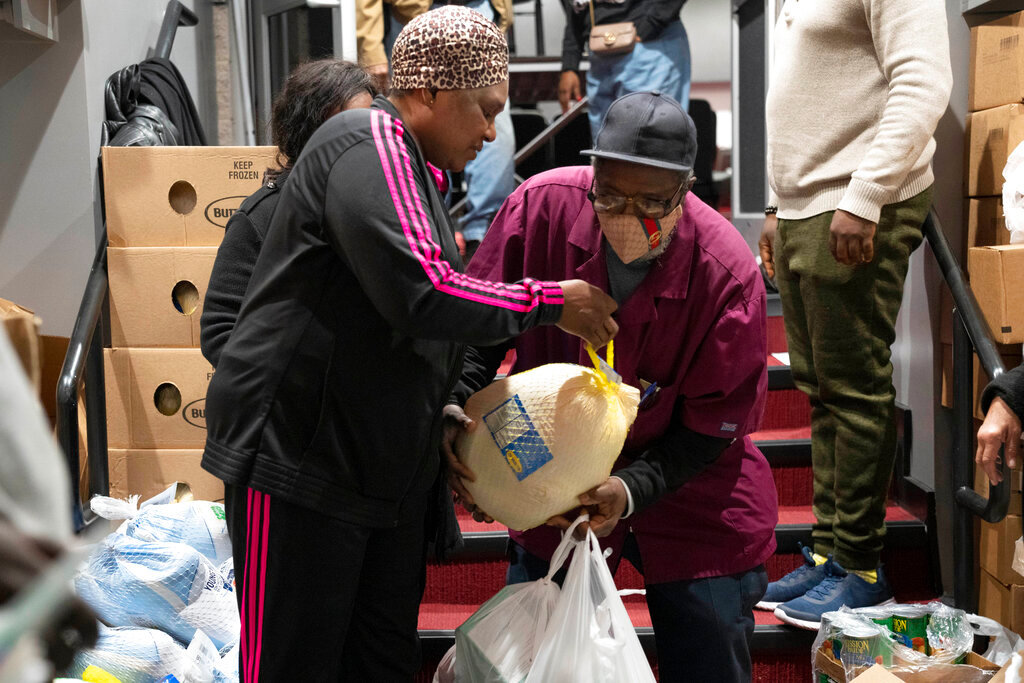 WASHINGTON (AP) — Staffers at Bread for the City, a venerable charity in the nation's capital, thought they were prepared for this year's annual pre-Thanksgiving Holiday Helpers food giveaway. The pandemic had faded, but inflation was high, so they budgeted to give out 12,000 meals, 20% higher than normal pre-pandemic levels.

But they were quickly overwhelmed, with long lines of clients waiting hours to receive a free turkey and a $50 debit card for groceries. They were forced to shut down three days early after helping 16,000 people, many more than anticipated.

“We don’t want to retraumatize our community by having them wait outside four hours for a turkey,” said Ashley Domm, the charity’s chief development officer. “We are not set up to have hundreds of people lined up on a city street.”

Bread for the City’s experience reflects a larger dynamic playing out across the country. What many Americans hoped would be the first normal holiday season in three years has instead been thrown into a heightened hunger crisis once again, with Christmas on the horizon.

A September report by the Urban Institute estimated that about 1 in 5 adults experienced household food insecurity last summer, about the same as during the first year of the pandemic but a sharp increase from the spring of 2021. Black and Hispanic adults reported higher rates of food insecurity than their white counterparts, according to the report.

“In the pandemic, nobody had jobs and nobody had money,” said Nancy Murphy, a 45-year-old caregiver picking up a frozen turkey and groceries last week from a giveaway at the Redeemed Christian Church of God New Wine Assembly church in northeast Washington. “Now they’re back at their jobs but the money isn’t going far enough. It’s still hard.”

The government estimates food prices will be up 9.5% to 10.5% this year. And that's squeezing the budgets of many Americans and the food banks that have helped them, especially with the expiration of the massive flow of pandemic relief aid.

“ Inflation has been the story of the year,” said Michael Altfest, director of community engagement at the Alameda County Food Bank in Oakland, California.

Altfest said the level of community need remains 50% to 70% higher than pre-pandemic levels, and about 30% of calls to the food bank’s emergency helpline are from first-time callers.

In multiple cases, charities and food banks had prepared for increased numbers due to inflation, only to find the level of need had far exceeded their projections.

The Capital Area Food Bank in Washington originally projected it would need to distribute about 43 million meals during the July 2022-June 2023 budget year. Now four months into that fiscal year, it already is 22% ahead of those predictions.

“That was an educated prediction with a good four or five months of information,” said the food bank's CEO, Radha Muthiah. “We are always thinking about Thanksgiving and Christmas right when everybody's heading to the beach in summer.”

In Illinois, Jim Conwell of the Greater Chicago Food bank says the need remains elevated. "So we’re purchasing more and we’re spending more on what we do purchase," he said.

His organization’s network served about 30% more households in August 2022, compared to the previous August.

“Families that were just getting their feet back underneath them are experiencing a whole new challenge or even if they have employment, or have several jobs or sources of income, it’s just not going as far as it was two years ago,” he said.

Higher prices are forcing people to make “sacrifices on their food,” Altfest said.

For example, he said, the price of chicken has more than doubled — from 78 cents per pound last year to $1.64 per pound this year. Estimates from the Farm Bureau set the cost of turkey is 21 percent higher than last year. And market researcher Datasembly estimates that a 16-ounce box of stuffing costs 14% more than last year, while a 5-pound bag of Russet potatoes averages 45.5% more.

Mike Manning, president of the Greater Baton Rouge Food Bank in Louisiana, draws a distinction between the increased hunger levels sparked by the pandemic and the current crisis. During the pandemic, millions of people's jobs and incomes essentially disappeared, creating an immediate wave of need that he compared to the aftermath of a hurricane.

But the current crisis has been a slow and steady rise, starting in late February and still climbing. Manning said his food bank has seen a 10% to 15% rise in local food insecurity in just the past two months.

“You're talking to people who are on lower incomes and they’re working multiple jobs — just think of the cost of them to get from one job to the other with the gas eating up whatever extra they’re trying to make,” he said. “What are they going to do? Do they give up gas so they can’t get to work or sacrifice on food and come back and ask us for help?”

And with no clear signs on when the long-term inflation wave might ease, “This almost feels like more of a marathon with no finish line in sight,” said Conwell of the Chicago food bank.

Domm recalls the lines at Bread for the City that "just stayed overwhelmingly long,” for weeks.

The fact that clients were willing to stand outside for hours for a turkey and a debit card speaks to “the intensity and depth of the need,” she said.

Domm also believes there's a psychological element at play as well; after two consecutive holiday seasons warped by the pandemic, families are intensely eager to have something closer to normal.

“People have avoided their families for the last two years. So this year, there’s more pressure to really get groceries and have a group meal,” she said.