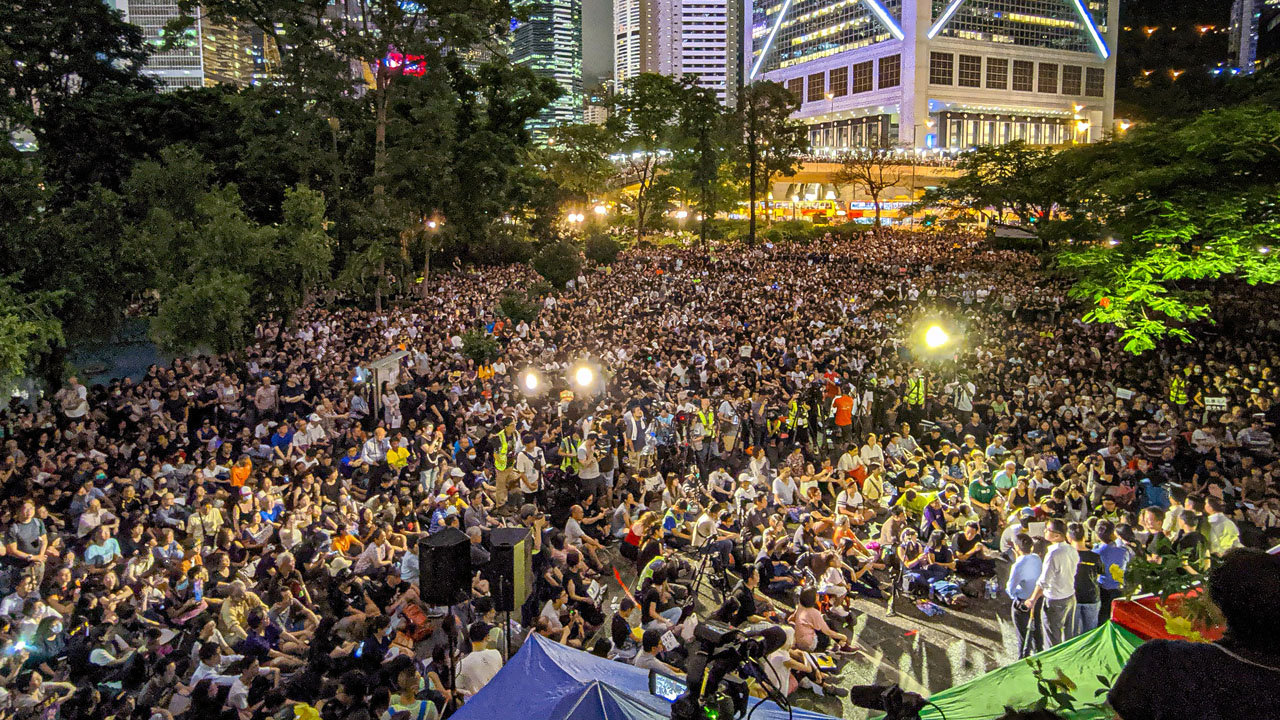 Hundreds of civil servants of Hong Kong gather at Chater Garden on August 2, urging the government of Hong Kong to to address protesters’ demands over the extradition bill crisis. WIKIPEDIA COMMONS/Special

HONG KONG (BP) — The withdrawal of an extradition bill that threatened religious freedom in Hong Kong is not enough to satisfy Christians and others amid protests there, a Christian advocate told Baptist Press Wednesday, Sept. 4.

"Their anger lies with the excessive use of police/force, police brutality, and prosecution of protestors or activists in the past few months," International Christian Concern's (ICC) Gina Goh told BP.

"These are the direct results of Lam's refusal to withdraw the bill in the first place," noted Goh, ICC's regional manager for Southeast Asia.

"Eight lives perished for this cause," she said, "and the demonstrators want to continue to pursue justice and democracy so their fellows did not die in vain." Goh referenced suicides since June, which climbed to nine Wednesday, of Hong Kong residents who expressed frustration and anger with current events in Hong Kong.

Lam pledged Wednesday to formally withdraw the Fugitive Offenders Ordinance which would have given China the right to extradite Hong Kong residents to mainland China for prosecution. Lam's announcement followed her June pledge to suspend the bill, but Christians and others had sought certainty the bill would not be revived.

"While it is a good news that ... Lam pledges to formally withdraw the controversial law, a bill that has initiated a series of protests and social movement in Hong Kong since early June," Goh said, "many Hong Kong Christians believe that it is simply not enough.

Comprising about 10 percent of Hong Kong residents, Christians feared the extradition law would subject them to the intense religious persecution Christians suffer in China. Among freedoms enjoyed in Hong Kong, Christians can gather without obtaining a permit as required in China.

In addition to Wong, Goh quoted another Christian who requested anonymity and described the protestors' demands as indispensable and urgent. "Withdrawing the bill is not enough anymore," Goh quoted the Christian. "So address all of the demands."

The Justice and Peace Commission of the Hong Kong Catholic Diocese has also condemned police brutality and urged the government to respond to all demands of protestors, Goh said.

"The police opposed public gatherings and marches on August 31, 2019, fired at the masses and used water cannons to suppress them," the Justice and Peace Commission said Aug. 31. "In the evening, a group of riot police attacked the public in and around the Prince Edward mass transit railway station, arrested members of the public indiscriminately, causing many injuries."

Christians have been active in protests since they began, promoting peaceful resistance while publicly singing hymns and praying, according to numerous news reports.

Hong Kong Christians protested specifically on Aug. 23, according to the firstthings.com journal of the Institute on Religion and Public Life, an interreligious, nonpartisan research group. Christians wore religious shirts, sang hymns, and joined hands with other protestors in a human chain that stretched 30 miles, firstthings.com reported.

Hong Kong is a nearly autonomous special administrative region of China with separate executive, legislative and judicial powers, operating under a "one country, two systems" model. The extradition law threatened to disrupt the model, Christians and others have said.

China sets sanctions on Taiwan figures to punish US, island

US, South Korea to begin expanded military drills next week