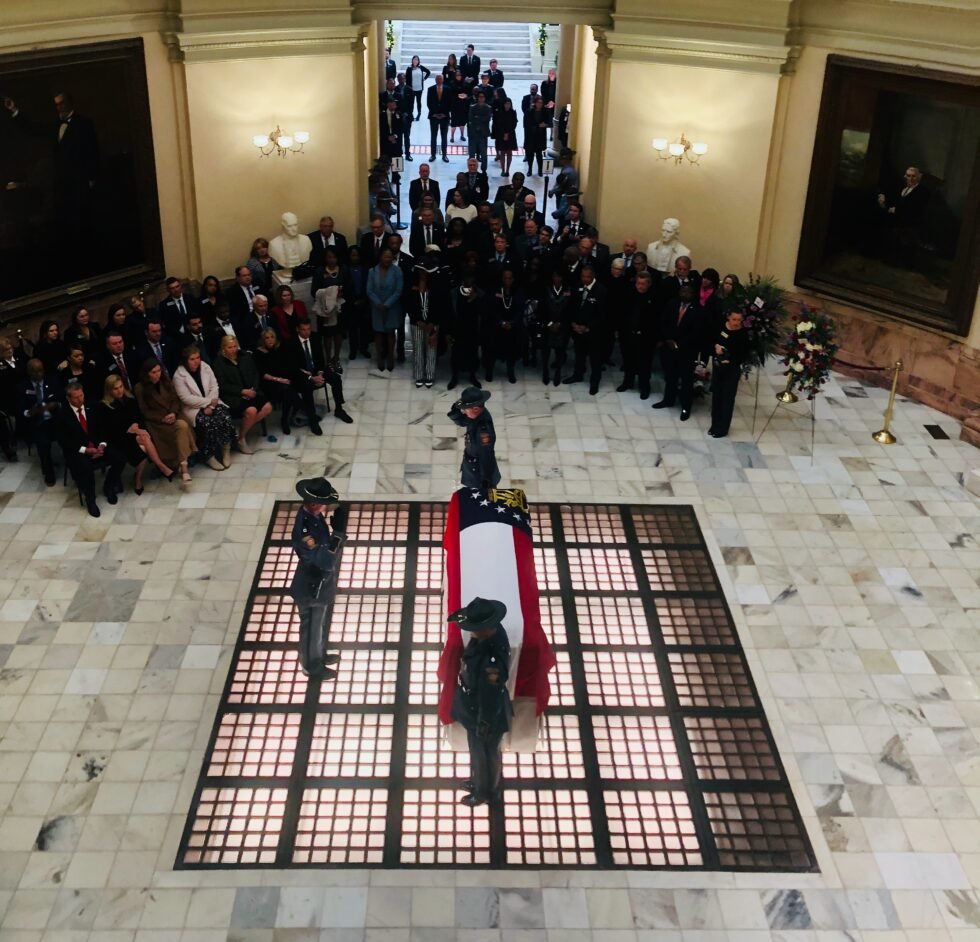 ATLANTA – Legislators from across Georgia and across party lines gathered underneath the Gold Dome Tuesday to pay tribute to former House Speaker David Ralston, who died last week and will lie in state at the Capitol until Wednesday morning.

“He was a loyal friend through times of victory and loss,” Gov. Brian Kemp told the assembled mourners, who included Ralston’s family members as well as many state lawmakers.

“At times, he governed the House with an iron fist but also a big soft heart. That is why he was so respected and admired.”

“Those who frequently disagree with each other can still come together to achieve extraordinary things,” Kemp said of Ralston’s approach to politics.

“Of all those friends I’ve had the privilege of knowing, David Ralston was unique,” said Len Walker, who was Ralston’s pastor and, prior to that, served with Ralston in the Georgia House of Representatives. “He was one of a kind and I treasure his memory.”

Walker, a Republican who represented Loganville, described how his conversations with Ralston while in the House often started off with legislation but quickly transformed into explorations of deep topics such as theology, life and death.

“I treasured the conversations we had,” Walker said. “He was a friend who would build you up …. [and] make you feel better about what you were trying to do in this state Capitol.”

“We passed a very significant mental health reform bill because of David Ralston’s leadership. It would never have happened without him,” Oliver said. “He was committed from the beginning. I think his cause for reform will go on beyond today.”

Ralston was well known for maintaining a civil atmosphere in the Georgia House.

Ralston did not shy away from challenges, said Smyre, who was chairman of the House Democratic Caucus. Smyre pointed to the former speaker’s success with this year’s mental health reform bill and the 2015 transportation package.

“He loved those heavy lifters,” Smyre said. “Politically, he had a two-way street and not a one-way alley. You could go back and forth with him, reason with him.”

“Though there were major differences under the Gold Dome, there was a sense of civility, that you could disagree without being disagreeable,” Smyre added. “A giant tree has fallen.”

Ralston surprised Georgians earlier this month when he announced he would not run for the leadership position next year. His death followed soon thereafter. House Majority Leader Jon Burns, R-Newington, is expected to succeed Ralston as speaker during the next legislative session, which will begin in January.

Ralston’s body will lie in state in the Rotunda of the state Capitol until Wednesday morning. A funeral service at Fannin County High School Performing Arts Center in Blue Ridge is planned for 1 p.m. on Sunday, Nov. 27.