WASHINGTON — Georgia Baptists’ commitment to fighting human trafficking received a reminder as to the worldwide scope of the problem with the release of the 2019 Trafficking In Persons Report (TIP).

The annual report produced by the U.S. State Department tracks nearly 200 nations, measuring them on their relative success in battling human trafficking. While the United States is among those countries considered more committed in practice to pushing back against trafficking, it nevertheless falls short in several areas such as prosecuting traffickers. 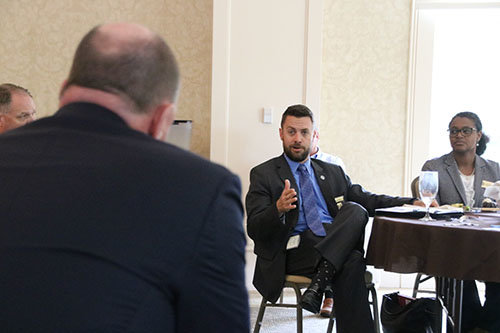 Jay Parrish, chief of police for Gainesville, makes a point Wednesday, May 1 as Georgia Baptist Executive Director Thomas Hammond listens. Looking on at right is Latera Davis, director of planning and preparedness for the Georgia Department of Juvenile Justice. SCOTT BARKLEY/Index

In the United States, Atlanta has become recognized as a high-activity area for human trafficking. That distinction led to a law enforcement summit in May hosted by the Georgia Baptist Mission Board. In that gathering, Executive Director W. Thomas Hammond held an open conversation with various law enforcement familiar with the issue of trafficking in the metro area. Those in attendance thanked churches willing to become involved and urged greater participation.

“It can be as simple as a church couple having a spare bedroom [as a temporary stay for a trafficking victim],” said Gainesville Chief of Police Jay Parrish. “I’m talking 24 or 48 hours, until a case worker can be assigned.”

Weeks later Georgia Baptists took part in the Unholy Tour, an annual visit via bus to numerous trafficking spots in northeast metro Atlanta. Those once caught in human trafficking, advocates helping others escape it, and law enforcement serve as speakers for the evening. One recounted her story of being abused by her father, an ordained minister, and then being trafficked to others.

While addressing the issue in their backyard, Southern Baptist churches can also view the TIP report as a reminder of the global scale trafficking presents.

"The report exists to educate us on what human trafficking looks like around the world and what is being done about it," Raleigh Sadler, a Southern Baptist who founded Let My People Go, told Baptist Press. "For those of us in the local church, we could read the country narratives to have a better picture of what is happening in each setting. Imagine what could happen if we prayed for those in each country."

While countries such as the United State can still do more to fight human trafficking, the report cites others who appear to systematically endorse it.

"In North Korea, the government subjects its own citizens to forced labor both at home and abroad and then uses proceeds to fund nefarious activities,” Secretary of State Mike Pompeo said in the BP article.

"In China, authorities have detained more than a million members of ethnically Muslim minority groups in internment camps," he added. "Many are forced to produce garments, carpets, cleaning supplies, and other goods for domestic sale."