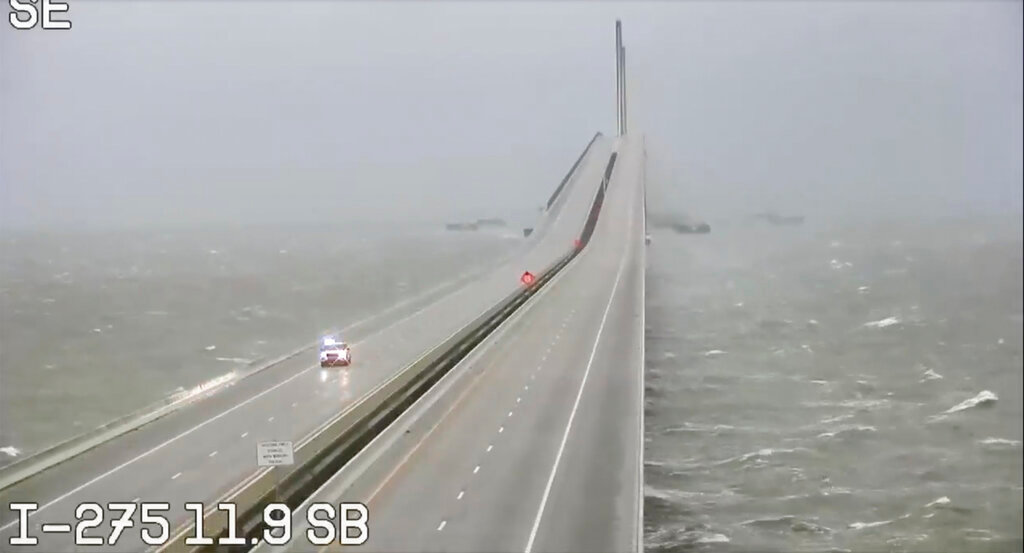 This image provided by FLDOT shows an emergency vehicle traveling on the Sunshine Skyway over Tampa Bay, Fla., on Wednesday, Sept. 28, 2022. (FDOT via AP) 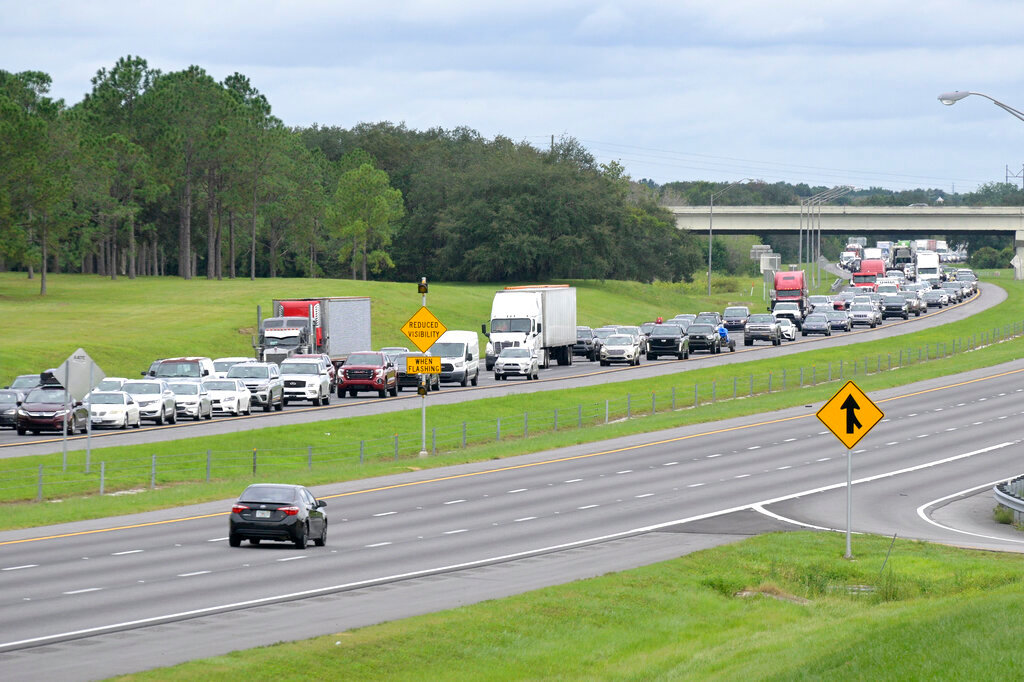 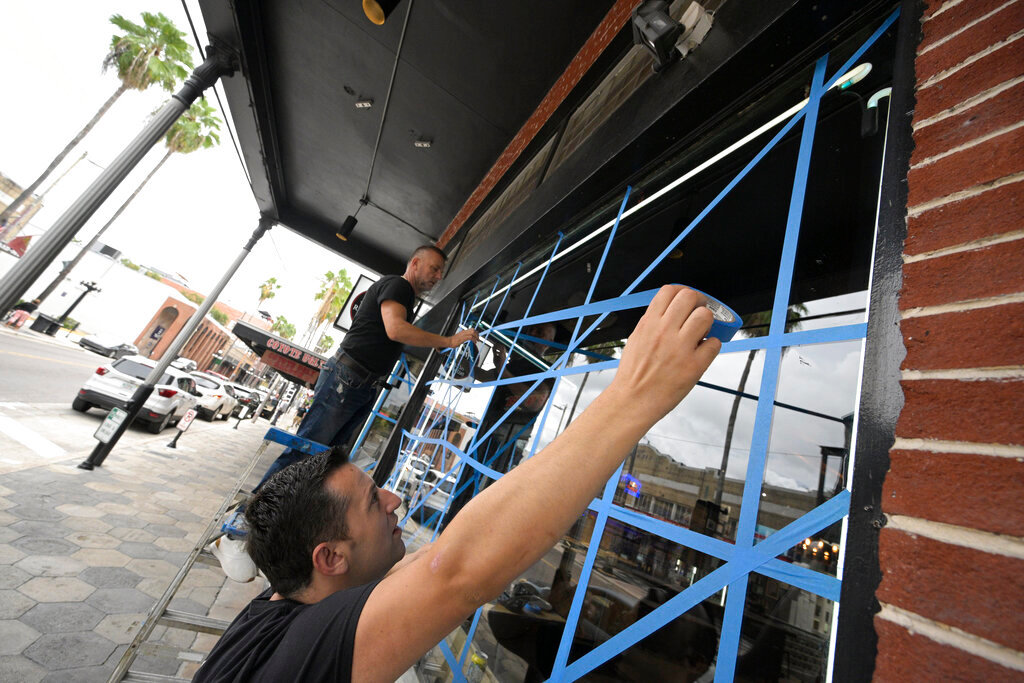 Lukas Berlajolli, above, and Tony Fazliu help tape up the windows of a pizza restaurant in the Ybor City district in preparation for Hurricane Ian as the storm approaches the western side of the state, Tuesday, Sept. 27, 2022, in Tampa, Fla. (AP Photo/Phelan M. Ebenhack)
Phelan M. Ebenhack 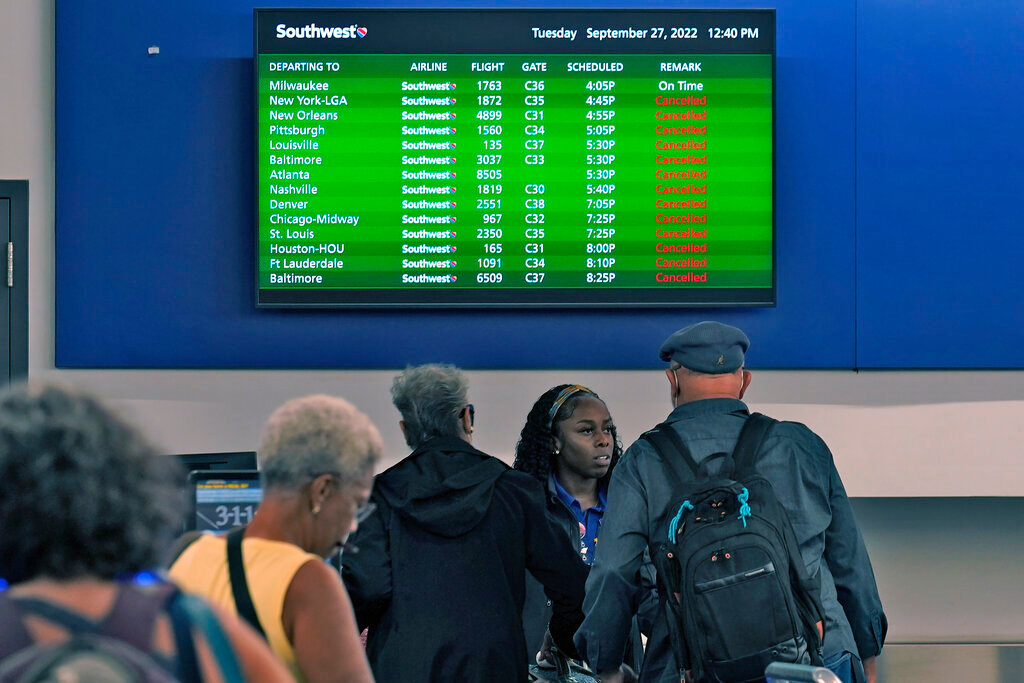 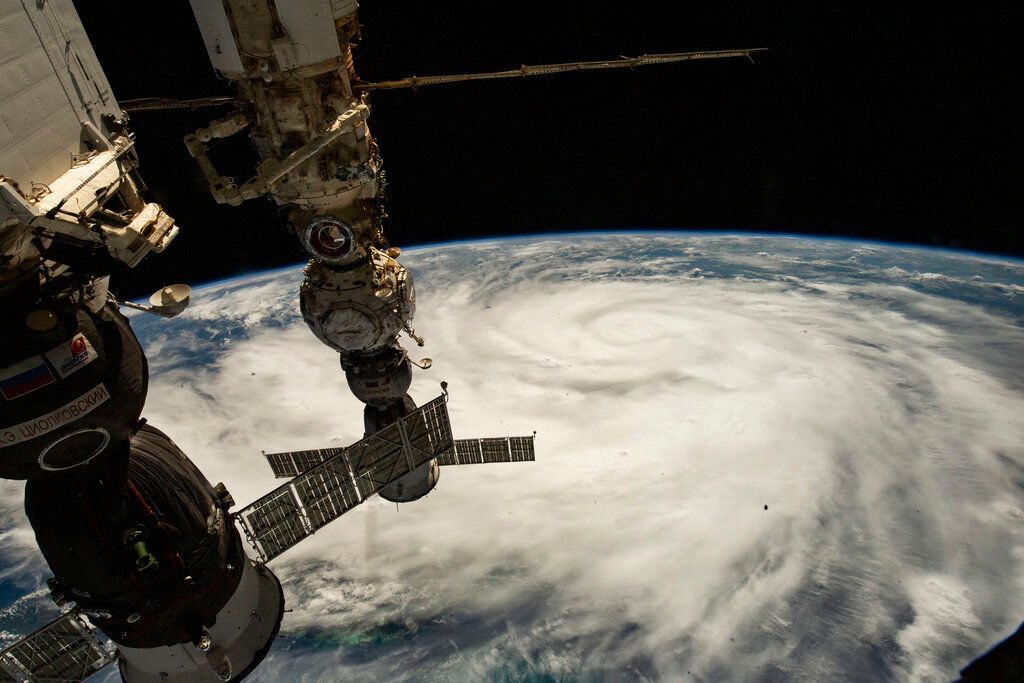 U.S. Air Force hurricane hunters confirmed Ian gained strength over warm Gulf of Mexico water after battering Cuba, bringing down the country’s electricity grid and leaving the entire island without power. Ian was centered about 65 miles west-southwest of Naples at 7 a.m., swirling toward the coast at 10 mph.

“This is going to be a nasty nasty day, two days,” Florida Gov. Ron DeSantis said early Wednesday, stressing that people in Ian's path along the coast should rush to the safest possible shelter and stay there.

“If you are in any of those counties it is no longer possible to safely evacuate. It’s time to hunker down and prepare for the storm," DeSantis said. “Do what you need to do to stay safe. If you are where that storm is approaching, you’re already in hazardous conditions. It’s going to get a lot worse very quickly. So please hunker down."

The massive storm appeared on track to slam ashore somewhere north of Fort Myers and some 125 miles south of Tampa, sparing the bay area from a rare direct hit from a hurricane. The Fort Myers area is popular with retirees and tourists drawn to pristine white sandy beaches and long barrier islands, which forecasters said could be completely inundated.

The hurricane center warned of catastrophic storm surges raising the water level as much as 12 to 16 feet above ground level for coastal areas straddling Punta Gorda and Fort Myers, which are between Naples and Sarasota.

More than 2.5 million people were under mandatory evacuation orders, but by law no one could be forced to leave. The governor said the state has 30,000 linemen, urban search and rescue teams, and 7,000 National Guard troops from Florida and elsewhere ready to help once the weather clears.

“The assets we have are unprecedented in the state’s history and, unfortunately, they’ll need to be deployed,” DeSantis said.

Florida residents rushed ahead of the impact to board up their homes, stash precious belongings on upper floors and join long lines of cars away from the shore.

“You can’t do anything about natural disasters,” said Vinod Nair, who drove inland from the Tampa area Tuesday with his wife, son, dog, and two kittens seeking a hotel in the tourist district of Orlando. “We live in a high-risk zone, so we thought it best to evacuate.”

Winds exceeding tropical-storm strength of 39 mph reached Florida by 3 a.m. and the first hurricane-force winds were recorded by 6 a.m., well in advance of the eyewall moving inland, the Miami-based center said. Rainfall near the area of landfall could top 18 inches.

Overnight, Hurricane Ian went through a natural cycle when it lost its old eye and formed a new eye. The timing of this is bad for the Florida coast because it means the storm got stronger and larger hours before it was set to make landfall, making it even more of a menace. Ian went from 120 mph to 155 mph in just three hours, the second round of rapid intensification in the storm’s life cycle.

“With the higher intensity, you’re going to see more extensive wind damage. The larger wind field means that more people will experience those storm-force winds,” University of Miami hurricane researcher Brian McNoldy said. And “it will really increase the amount of storm surge.”

Ian’s forward movement slowed over the Gulf, enabling the hurricane to grow wider and stronger, and its predicted path shifted slightly southward. That would likely spare Tampa and St. Petersburg their first direct hit by a major hurricane since 1921.

Instead, the most damaging winds could hit a rapidly developing coastline where the population has jumped sevenfold since 1970, according to the U.S. Census, which shows Lee County has seen the eighth largest population growth among more than 180 Atlantic and Gulf coast counties in the past 50 years.

There were 250,000 people in the Fort Myers/Lee County mandatory evacuation zones, and authorities worried ahead of the storm that only 10% or so would leave.

Gil Gonzalez wasn't taking any chances. He boarded the windows of his Tampa home with plywood and laid down sandbags to guard against any flooding. He and his wife packed their car with bottled water, flashlights, battery packs for their cellphones, and a camp stove before evacuating.

“All the prized possessions, we’ve put them upstairs in a friend’s house," Gonzalez said.

Airports in Tampa, St. Petersburg, and Key West closed, as did Disney World theme parks and Sea World in Orlando ahead of the storm.

A couple from England on vacation in Tampa found themselves faced with riding out the storm at a shelter. Glyn and Christine Williams of London were told to leave their hotel near the beach when evacuations were ordered. Because the airport shut down, they could not get a flight home.

“Unfortunately, all the hotels are full or closed, so it looks as though we’re going to be in one of the shelters,” Christine Williams said.

Her husband insisted all would be fine. “You know, you got to go with the flow,” Glyn Williams said. "So we’re quite happy doing what we’re doing.”

The precise location of landfall was still uncertain, but with Ian's tropical storm-force winds extending 175 miles from its center, flash floods were possible across the whole state. Parts of Florida's east coast faced a storm surge threat as well, and isolated tornadoes were spinning off the storm well ahead of landfall. One tornado damaged small planes and a hangar at the North Perry Airport, west of Hollywood along the Atlantic coast.