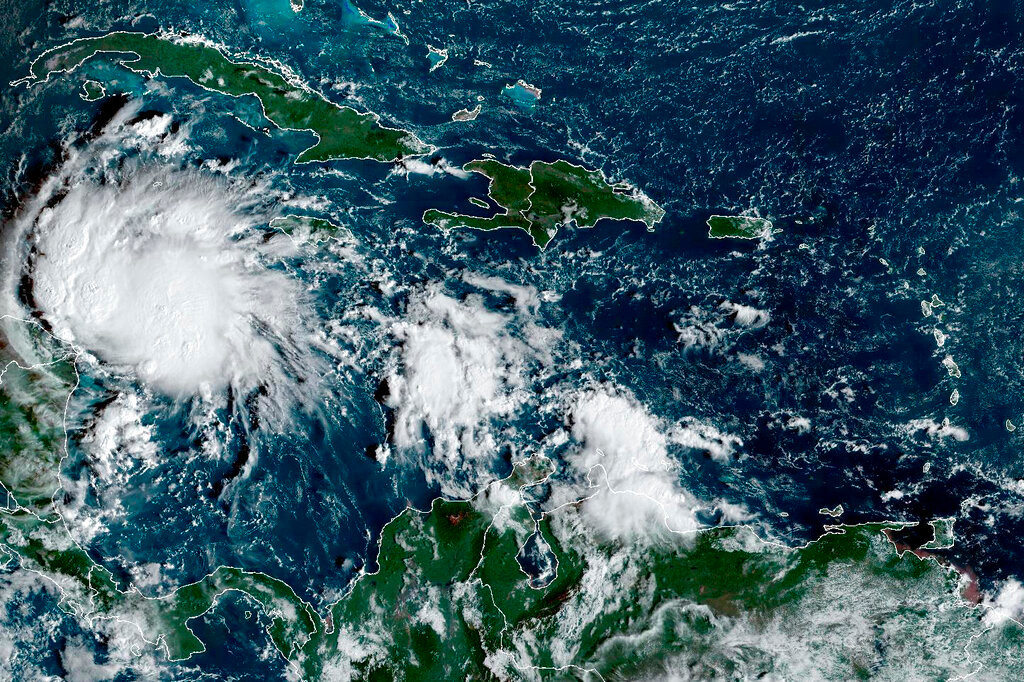 This satellite image taken at 8:40am ET and provided by NOAA shows Tropical Storm Lisa under Cuba in the Caribbean Sea, Tuesday, Nov. 1, 2022. Lisa is forecast to make landfall in Central America later in the week as a likely hurricane. (NOAA via AP)
Posted Wednesday, November 2, 2022 2:41 pm

MEXICO CITY (AP) — Hurricane Lisa strengthened Wednesday in the western Caribbean as it headed for landfall in Belize later in the day.

The U.S. National Hurricane Center said Lisa had maximum sustained winds of 80 mph by early afternoon. The storm's center was about 35 miles east-southeast of Belize City and moving west at 14 mph.

Belize's National Emergency Management Organization said the storm was expected to come ashore near Belize City, the country's capital, but warned that "residents across the country are reminded to be prepared.”

Einer Gomez, the assistant manager at Ramon's Village Resort in San Pedro on Ambergris Caye, just off the coast of Belize, said a light rain had started to fall and there was some storm surge, but no high winds yet.

“All the guests that are in the beachfront units have been relocated" to less exposed rooms, and beach furniture had been secured, Gomez said. “Everyone is just waiting for it to pass,” he said.

Lisa was forecast to cross Belize into northern Guatemala and then move into southeastern Mexico by Thursday.

The hurricane center warned of the danger of flooding and mudslides from heavy rains. It said the storm could drop 4 to 6 inches of rain on Belize, the Bay Islands, northern Guatemala, the eastern portion of Mexico's Chiapas state, and the Mexican state of Tabasco.

A hurricane warning was posted for Roatan island and the other Bay Islands of Honduras as well as the coast of Belize north and the southern coast of Mexico's Yucatan Peninsula from Chetumal to Puerto Costa Maya.

Lisa could re-emerge into the Gulf of Mexico, but as a tropical depression.

Far out in the Atlantic, Tropical Storm Martin rose to hurricane strength Wednesday, but forecasters said it posed no immediate threat to land.

Martin had maximum sustained winds of 75 mph. It was centered about 790 miles south-southeast of Cape Race, Newfoundland, and moving to the east-northeast at 26 mph.