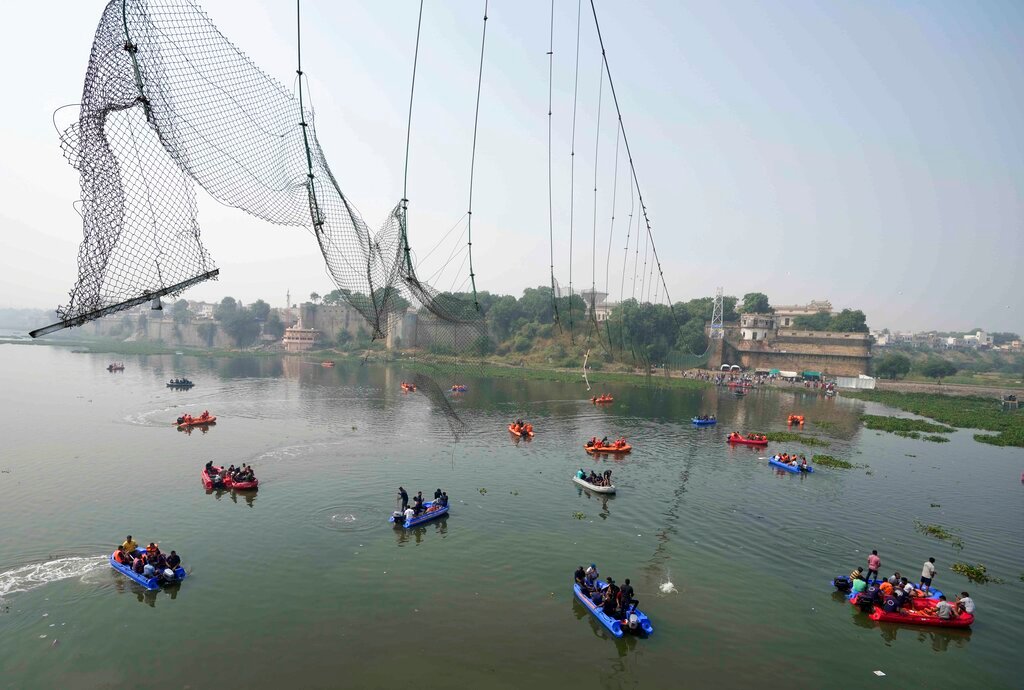 Rescuers on boats search in the Machchu river next to a cable bridge that collapsed on Sunday in Morbi town of western state Gujarat, India, Tuesday, Nov. 1, 2022. (AP Photo/Ajit Solanki) 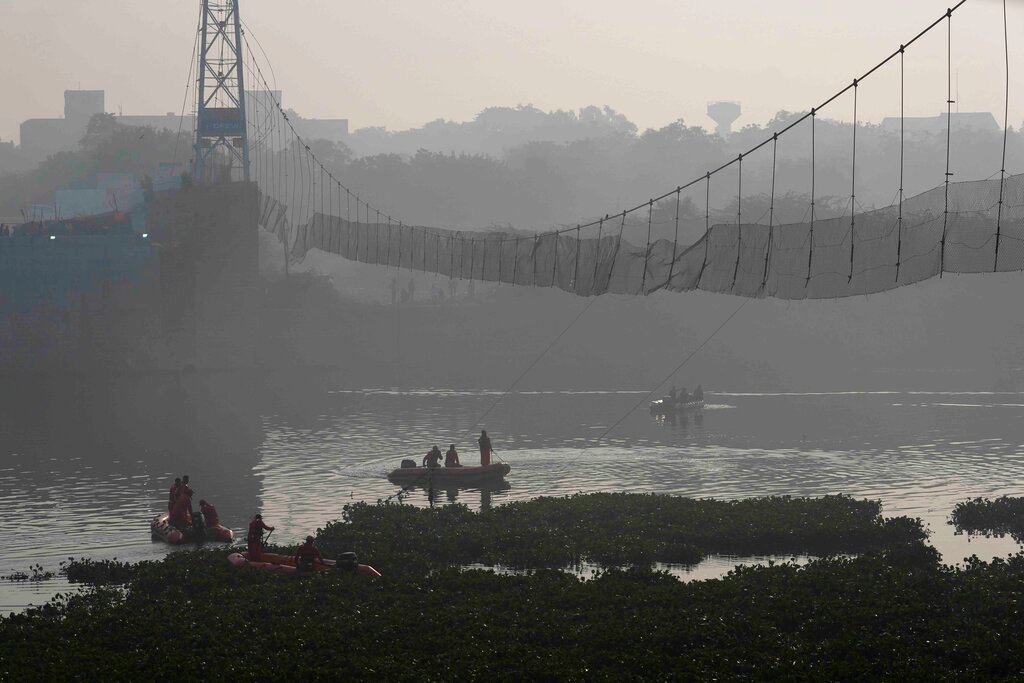 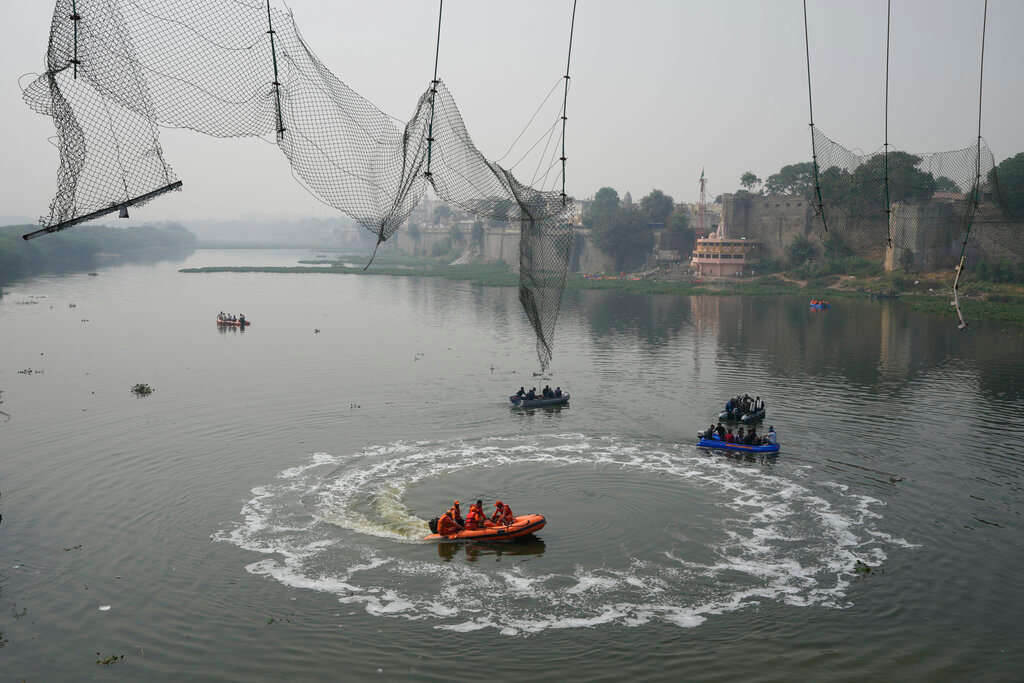 Rescuers on boats search in the Machchu river next to a cable bridge that collapsed on Sunday in Morbi town of western state Gujarat, India, Tuesday, Nov. 1, 2022. (AP Photo/Ajit Solanki)
Previous Next
Posted Tuesday, November 1, 2022 9:37 am
By SHEIKH SAALIQ and AIJAZ HUSSAIN, Associated Press

MORBI, India (AP) — India’s prime minister on Tuesday visited the site in western India where a newly repaired 143-year-old suspension bridge collapsed into a river, sending hundreds plunging into the water and killing at least 135 in one of the country’s worst accidents in years.

Narendra Modi inspected the collapsed bridge in Morbi town in Gujarat state and talked to rescuers. He also visited injured people at a hospital. Security was tight as police and paramilitary soldiers blanketed the area.

Gujarat is Modi's home state and he was already visiting it at the time of the accident. He said on Monday that he was “deeply saddened by the tragedy” and his office announced compensation for families of the dead.

Angered and bereaved families mourned the dead as attention turned to why the pedestrian bridge, built during British colonialism in the late 1800s and touted by the state’s tourism website as an “artistic and technological marvel,” collapsed Sunday evening, and who might be responsible. The bridge had reopened just four days earlier.

Police Inspector-General Ashok Yadav told The Associated Press that no one was missing according to an official tally, but emergency responders and divers continued to search Tuesday.

“We want to be on the side of caution,” Yadav said.

The officer said at least 196 people were rescued and all 10 of the injured were in stable condition.

At the accident site, at least half a dozen divers searched through the dark water.

Gaffar Shah, the caretaker of the main Muslim graveyard in Morbi, said he helped bury 25 bodies after the disaster.

“I have never seen anything like this in my life," Shah said as he sat on the graveyard's pavement. "Entire families have been wiped out.”

Some families stood near freshly dug graves covered with marigold flowers as they prayed.

A little more than a mile away from the graveyard, at a Hindu crematorium where over a dozen bodies were brought for their last rites, the atmosphere was somber. A caretaker said they were “overwhelmed with dead bodies.” He said it was particularly painful to cremate children.

On Monday, police arrested nine people, including managers of the bridge’s operator, Oreva Group, as they began a probe into the incident.

In March, the Morbi town government awarded a 15-year contract to maintain and manage the bridge to Oreva, a group of companies known mainly for making clocks, mosquito zappers and electric bikes. The same month, Oreva closed the bridge, which spans a wide section of the Machchu river, for seven months for repairs.

The bridge has been repaired several times in the past and many of its original parts have been replaced over the years.

It was reopened Oct. 26, the first day of the Gujarati New Year, which coincides with the Hindu festival season. The attraction drew hundreds of sightseers.

Authorities said the structure collapsed under the weight of hundreds of people. A security video of the disaster showed it shaking violently and people trying to hold on to its cables and metal fencing before the aluminum walkway gave out and crashed into the river.

The bridge split in the middle with its walkway hanging down and its cables snapped.

It was unclear how many people were on the bridge when it collapsed. Survivors said it was so densely packed that people were unable to quickly escape when its cables began to snap.