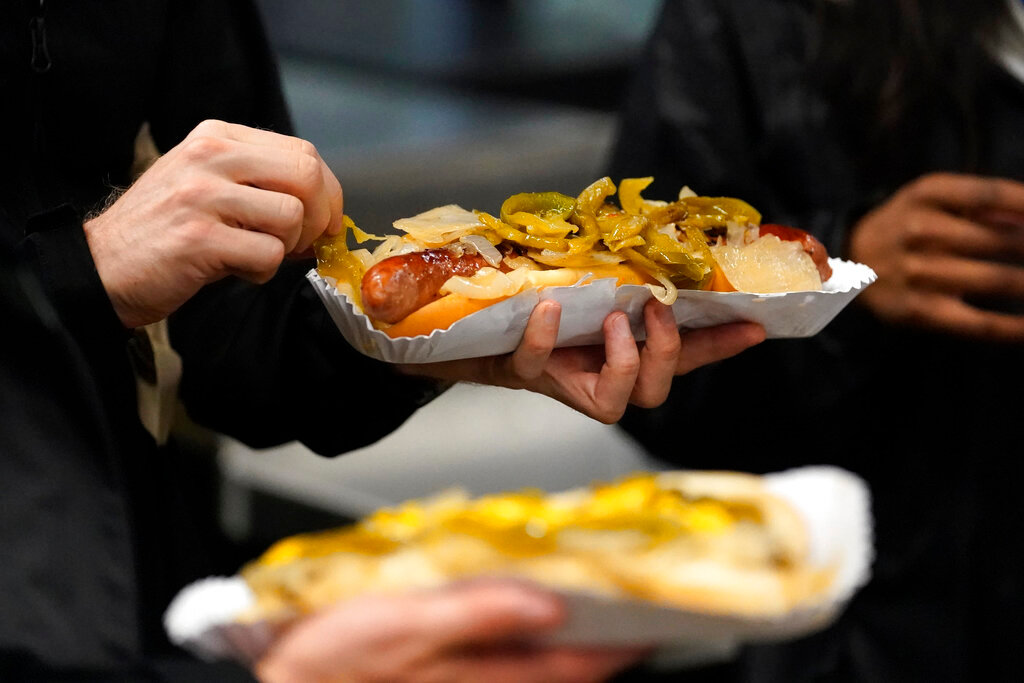 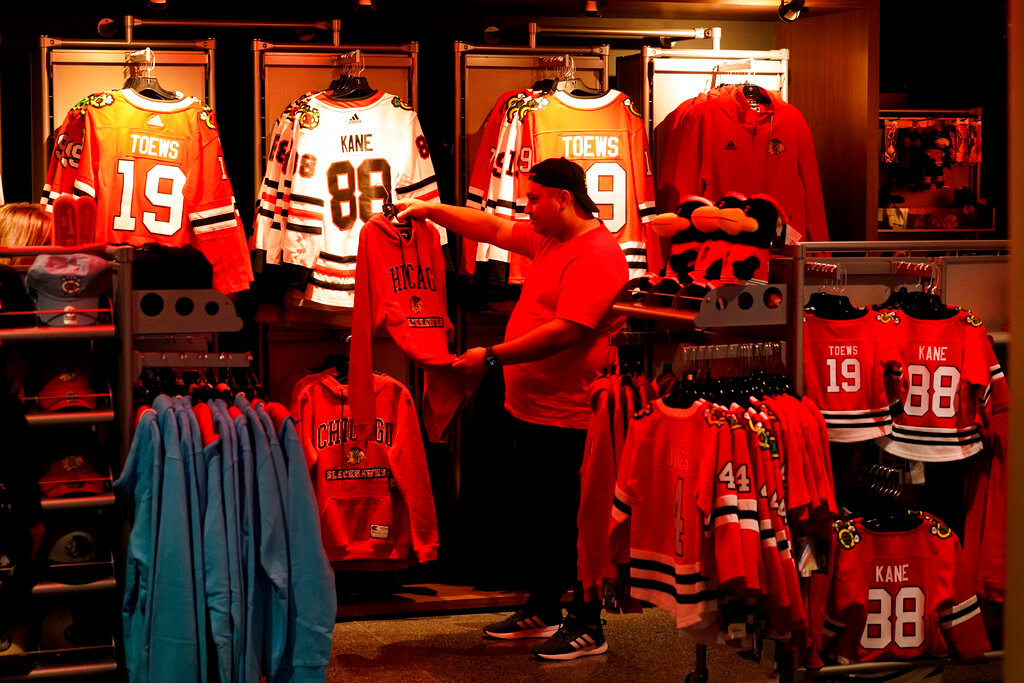 A Chicago Blackhawks fan shops at a team apparel store in the United Center before an NHL game between the Blackhawks and the Florida Panthers, Tuesday, Oct. 25, 2022, in Chicago. (AP Photo/Charles Rex Arbogast)
Previous Next
Posted Thursday, October 27, 2022 1:30 pm
By JAY COHEN, Associated Press

CHICAGO (AP) — Dan Coyne makes an annual trip from his Pennsylvania home to watch the Chicago Bears with his brother, Dave, who has season tickets.

The brothers got something to eat a couple hours before the game. Dave Coyne, 47, normally stays away from the concessions at Soldier Field, but “I only had to pay for myself tonight,” he said. “I didn’t have a kid or my wife with me.”

That's the calculus in play as fans balance their favorite sporting events — the games they missed desperately during the COVID-19 pandemic — with persistently high inflation and gas prices that loom over everything these days.

U.S. inflation jumped 8.2% in September from a year ago, the government reported this month. That’s not far from a four-decade high of 9.1% in June. Higher prices for housing, food, and medical care were among the largest contributors to the rise.

Given the industry’s reliance on disposable income, the inflation numbers are a troubling sign for sports business leaders.

“What’s historically accurate for teams is that they tend to try to take less on the ticketing side because once somebody comes in they typically will make up for it once they are inside,” said Ron Li, a senior vice president at Navigate, a data-driven consulting firm in sports and entertainment. “But with costs rising pretty much across the board after the turnstile, I think they have some decisions they need to make.”

According to Team Marketing Report, the average cost for a family of four to attend a 2022 Major League Baseball game was $256.41, an increase of $3.04 from the previous season. The main engine behind the rise was the cost of tickets, with the average general ticket price increasing 3.6% to $35.93.

Despite the jump in prices, Americans have largely kept up their spending, particularly on entertainment and other services like travel that they missed out on during the pandemic. Still, there are signs the solid spending won’t last: Credit card debt is rising and savings have declined as consumers, particularly low-income ones, have taken hits to their finances from the spike in inflation.

Sitting on a bench in front of Soldier Field, about to watch his beloved Bears play in person, money wasn’t exactly a big concern for Corey Metzger.

Or any concern, really.

“This trip has been a long time in the making, and I’m splurging whatever I got to spend to make it happen,” said the 45-year-old Metzger, who works in law enforcement in Fargo, North Dakota.

Casey Lynn, 43, a low-voltage technician from Minneapolis, and his wife, Lori, 44, a commercial lender, aren't big football fans, but they decided to check out the Bears on a trip to Chicago. While Casey Lynn said he is bothered by the ticket surcharges, the couple didn't want to pass on the opportunity to see the game.

Of course, the cost of games often includes a trip to the concessions stands for a hot dog or a beer. Concessions typically have a higher profit margin for sports teams and providers, but increased costs for goods, transportation and labor have cut into those margins.

The changes come after concessions companies were already profoundly impacted by the pandemic.

“The whole model has been kind of disrupted in a pretty big way as we're dealing with inflation of 10, 15, 20, 25, 30% when we have typically underwritten 2 or 3%,” said Jamie Obletz, president of Delaware North Sportservice. “And you can imagine the impact that that's had on us and what it's forced us to think about and do over the past six to 12 months, like a lot of companies.”

Paul Pettas, a vice president with Sodexo Live!, estimated overall costs are up 10% to 15% over the past 12 to 24 months.

“In reality, costs are up across the board, but we certainly try to do as much as we can to keep that down and not have that affect the average fan or guest who comes to our events,” he said.

Concessions companies also are experiencing lingering issues with their supply chains, which have improved recently but remain a factor. Obletz recalled his company running out of peanuts midway through the 2021 World Series in Atlanta, so two workers drove a truck to another venue, loaded up and then drove through the night to get back to Truist Park.

“Things are not great,” Obletz said. “They're better than they were, it feels like, three to six months ago, and our hope is that it continues to improve.”

The issues have forced concession companies to get creative in an effort to address the rising costs with minimal effect on consumers in terms of culinary options and price.

Chefs are redesigning menus to replace items that face significant cost increases and consolidating other options. They are using analytics to examine portion sizes — do consumers need six chicken fingers or will five work instead? — and taking a closer look at their vendors.

“There's dozens of things like this that we've tried to do and are doing as we speak, trying very desperately to offset those pricing increases that we're seeing,” Obletz said.

Alison Birdwell, the president and CEO of Aramark Sports + Entertainment, said the company is leaning on analytics and its data science team “more than ever” when it comes to menu strategies and new concessions items.

"With that guidance, we are working to give fans the items they’re looking for while simultaneously being efficient with our product and mitigating significant increases in cost,” Birdwell said in a statement to AP.