Kicking religious freedom to the curb 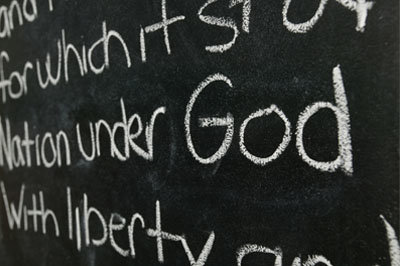 I have been tracking the assault on religious liberty for years now. But in the past two or three weeks, the incidences of this First Amendment freedom being under attack have been appalling. Consider the following:

In Wisconsin atheist Rob Moore expressed indignation over “Christian symbolism” that was in a fourth grade classroom. His complaint forced the teacher to remove a cross, a poster listing “virtues and vices," a placard that read, “In God We Trust,” and a picture frame that included the American flag and the words, “God bless America.”

Moore is the president of a Freedom From Religion Foundation chapter, a vigilante group of anti-God freethinkers who are on a crusade to eliminate any vestige of Christianity from our schools and from the public’s view in the marketplace. The FFRF also got their hackles up because there was a “Child’s Christian Bible in the school’s library.

However, the Bible Belt is not exempt from the offensive being launched against Christianity in America. The McKinney School District in the metro Dallas, TX area has been holding its graduation exercises for three of its high schools at Prestonwood Baptist Church for a decade. They will not be doing so after this year. Why? The church and Pastor Jack Graham refused to remove the cross from view.

Self-professed atheist Jill Oyler and a group of community members complained to the Freedom From Religion Foundation and threatened to sue the school system if they continued to have their graduations in the church. The same group also complained about a prayer Rick McDaniel, school superintendent, led last August during a mandatory back-to-school convocation for district employees.

In Beloit, OH the Freedom From Religion Foundation is seeking to ban prayer from a local high school, but the community members are fighting back and the resistance to the FFRF mandate is spreading. In a town of only 900 people the community has sold 4,000 “Prayer Matters” shirts. Conversations about prayer and the Gospel are becoming commonplace throughout the community.

In Cincinnati, Judge Sylvia Hendon ruled to remove a minor girl from her parent’s home because they refused to capitulate to their daughter’s desire to take dangerous and untested gender-suppressing, gender-manipulating, hormone-manipulating sex-change drugs for so-called gender transition. While this may not be a strictly religious freedom case, it is an unprecedented move against parents’ God-given rights to bring up their child in the nurture and admonition of the Lord.

This case begs for an entire editorial because it illustrates what Hillary Clinton had in mind when she said it takes a village to raise a child. For years globalists have wanted to wrest the care and education of children away from their parents. In 1972 Dr. Chester Pierce stated, “Every child in America entering school at the age of five is insane because he comes to school with certain allegiances toward our founding fathers, toward his parents, toward a belief in a supernatural being. It’s up to you, teachers, to make all of these sick children well by creating the international children of the future.”

Brock Chisholm, head of the World Health Organization more than a half-century ago, called for a new attitude toward old-fashioned parents and called for an “eradication of the concept of right and wrong." He said, “We have swallowed all manner of poisonous certainties fed us by our parents. The results are frustration, inferiority, neurosis, and inability to ... make the world fit to live in.”

Parental discipline, instruction, guidance, and correction are anathema to this secular society. So, it should be no surprise that the government would take the side of a child over against his/her parents and consider the parents unfit to give proper guidance. Obviously, there are parents who are unfit to provide guidance and proper care for their children. But now we may begin to see more government intrusion not only into the church, but the home as well.

Also in Ohio, the same anti-religion activist organization leveled a lawsuit against the city of Findlay because of a mural illustrating Psalm 91:4: “He will cover you with his feathers, and under his wings shall you find refuge.” The mural portrays an eagle, symbolic of God, with wings spread in a majestic fashion.

Findlay Mayor Lydia Mihalik stated, “Maybe the Atheist Club in Madison, Wisconsin has nothing better to worry about ... but our community is strong because we have belief. We believe in a power greater than ourselves that promises a brighter day is ahead despite our individual struggles. In our community we have many people who practice many faiths and believe many things. I celebrate those elements of my community and refuse to apologize for it.”

The Family Research Council tells about another incident coming out of Ohio relating to a teenager who was removed from her parent’s home. Authorities did so because the parents didn’t support their daughter’s decision to identify as a boy and further declined to authorize hormone therapy to facilitate her gender "transition."

This is a prime example of government encroachment and intrusion into the private affairs of individuals and families. Even more, it illustrates the loss of freedom in America. It give us some insight into the secular worldview that lies behind the cultural shifts we are experiencing.

In Illinois the Department of Children and Family Services has developed a new set of policies promoting the “well-being of lesbian, gay, bisexual, transgender, and queer/questioning (LGBTQ) children and youth in the Department’s care.” In other words, they are encouraging children towards LGBTQ identities; and when a child is in state care, parents will have no say in whether the child will receive puberty blockers or hormone treatments.

This decision creates the application of secularization to our personhood, family, and society and will have devastating implications in view of who we are and how we live. This decision stands in contradistinction to what the Bible teaches and what we as Christians believe.

Mary Rice Hasson, a fellow at the Ethics and Public Policy Center in Washington, D.C., in writing on this subject declares, “Forget the democratic process. Forget free speech, freedom of religion, and the conscience rights of American citizens. Forget the welfare of vulnerable children.

“The state of Illinois heels to the commands of LGBTQ activists; it has embraced a new creed based on the LGBTQ vision of the human person. The only winners are progressive activists and lawyers eager to fill their litigation dockets. The losers? Illinois’ most vulnerable children.”

However, perhaps the most egregious illustration of the anti-Christian sentiment in this country was expressed by controversial Teen Vogue columnist Lauren Duca, who spoke out about her disdain for Billy Graham with words I would neither say nor use in writing this column. On the day of Dr. Graham‘s death she tweeted, “The big news today is that Billy Graham was still alive this whole time” and then she cursed and consigned him to the place where the devil will spend eternity.

All I know is that I wouldn’t want to be standing next to Ms. Duca in a thunderstorm. Isaiah tells the fate of those who abuse and speak harshly about God’s servants: "No weapon that is formed against thee shall prosper; and every tongue that shall rise against thee in judgment thou shalt condemn. This is the heritage of the servants of the Lord” (Isaiah 54:17).

This is just another example of the atheists and the elites’ disregard for freedom, as we have known it in America, and in particular their disregard for the freedom of religion. We must continue to fight the good fight of faith or the church in America will one day be driven underground.

You may say that I am just an alarmist. Maybe. But God has called me to be a watchman on the wall; and I am telling you what I see coming against our faith and our way of life.