Georgia Baptists are intent, resolved, and determined, with the help of God’s Spirit, to reach the next generation for Christ. In fact, you may have heard about U2019. It is the Georgia Baptist Mission Board’s initiative to assist churches in reaching students for Christ.

Current statistics show we are reaching fewer students now than in years past. We must renew our efforts to reach today's students, because we are faced with the stark reality of losing an entire generation for Christ if we fail to claim them for the cause of the Kingdom now. Those who take the time to look into today’s public school system will discover that “the fields are white unto harvest.”

Georgia Baptist churches must develop a strategy to reach students. Henry Blackaby might suggest that a student ministry may need to find out where God is working in the lives of students and get in on what He is doing.

Richard Walker, pastor of Macland Baptist Church, has found an effective way to reach teenagers. He is partnering with the Fellowship of Christian Athletes (FCA) to touch the lives of middle school and high school students in and around Powder Springs.

FCA student clubs have access to public schools, because they are protected by the First Amendment to the U.S. Constitution and the Equal Access Act, passed by Congress in 1984. The EAA puts religious clubs on an equal footing with all other students clubs by allowing them the same privileges and access to school facilities that other recognized clubs enjoy.

Macland Baptist Church, under Walker's leadership, has developed a partnership with the FCA and in part, through that partnership has gained access to the public schools in the area around their church. The schools being impacted by Macland include Hillgrove High School, McEachern High School, Lovinggood Middle School and Dobbins Middle School.

During the football season Macland Baptist often feeds the football teams from Hillgrove and McEachern high schools prior to their games. John Thompson, student minister at Macland, and a group of volunteers he has mobilized have made significant inroads into the schools by simply demonstrating the love of Christ through service.

Thompson recently found out about a student at Hillgrove who had aplastic anemia, a serious condition that occurs when one’s body stops producing enough new blood cells. He organized a car wash and a 5K run to help the family of the afflicted student with expenses and raised $8,500 for a student he did not know. That kind of loving involvement favorably impressed the school.

Thompson said, “Jim Hunter, one of the coaches at McEachern who also works with the FCA, got a lot of the athletes from McEachern to come run in the race to help raise the money for the bedridden student at Hillgrove.

“There are situations all around us that can help us build meaningful relationships to the school’s administration, faculty, and students. The church is the best place to find help and hope in a time of crisis. Our church is trying to be that kind of ministering church.”

Thompson, a U.S. military veteran who was awarded a Purple Heart for his service in Iraq, and other members of Macland have had the opportunity of speaking to some of the FCA groups in the schools 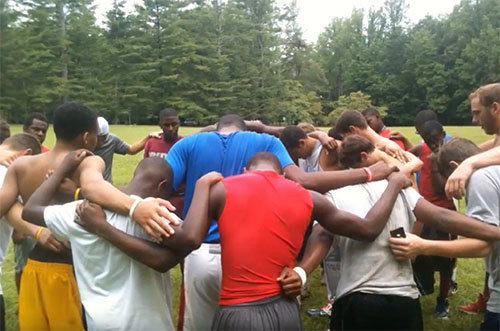 A group of athletes at an FCA camp huddle up to pray. FCA/Special

Last fall Macland Baptist Church was recognized at one of the Hillgrove football games for their support of the school. Walker stated, “We have access to the school and invited the football team to our wild game dinner recently. Many members of the team came to the dinner where the Gospel was presented.”

This past Sunday Macland had an FCA day. Scott Pope, a former high school and college football coach who is a member of Burnt Hickory Baptist Church in Powder Springs, spoke briefly to the congregation. Pastor Walker explained, “Scott knows how to capture the attention of athletes, because he played college football, is a power lifter, and has bench pressed 225 pounds 50 times in exhibitions. He knows how to speak their language.

“In our church he highlighted the ministry of their summer football camps, which will be held at the University of West Georgia beginning June 21. The three camps typically attract 3,700 athletes from 50 high schools. Each coach tries to bring as many of his players to the camp as possible. Most of them are able to get 75-80 percent of their team to come to the camp.”

The students enrolled in the camps go through a regimen of drills, have meaningful practice sessions, and develop a greater knowledge of the coaches’ expectations. But, they also have a strong spiritual emphasis and a time of worship each evening with a speaker to whom they can relate. Each year, according to Pope there are 400-500 commitments to Christ, many of them professions of faith.

Cody Carter, a member of Macland Baptist who also serves with the Fellowship of Christian Athletes, indicated that last year the number of commitments to Christ at the camp was incredible, that three lecture rooms were filled with students receiving counseling after the first day’s worship time and call to commitment.

Who do you think will follow up on those players and coaches from Hillgrove and McEachern who make decisions for Christ? It is most likely to be Macland, because of the partnerships they have established and the relationships they have already developed with the athletic teams.

Macland Baptists Church raised $5,034 for the camps on Sunday to provide scholarships for student athletes who could not afford to pay the cost for attending the football camp. Pastor Walker stated, “For many, this may be their only opportunity to hear the Gospel.”

This year’s FCA football camps at West Georgia are June 21-23, June 24-26, and July 18-20. If your church is interested in supporting someone for one of these FCA camps contact Scott Pope at (770) 733-7076. There is also likely a FCA ministry that is effectively reaching into the schools in your county. You may want to contact the FCA in your area and see how your church can partner with this effective ministry that already has a healthy relationship with the schools near where you live.

If we are going to reach this next generation we need to do whatever is necessary to get the job done.