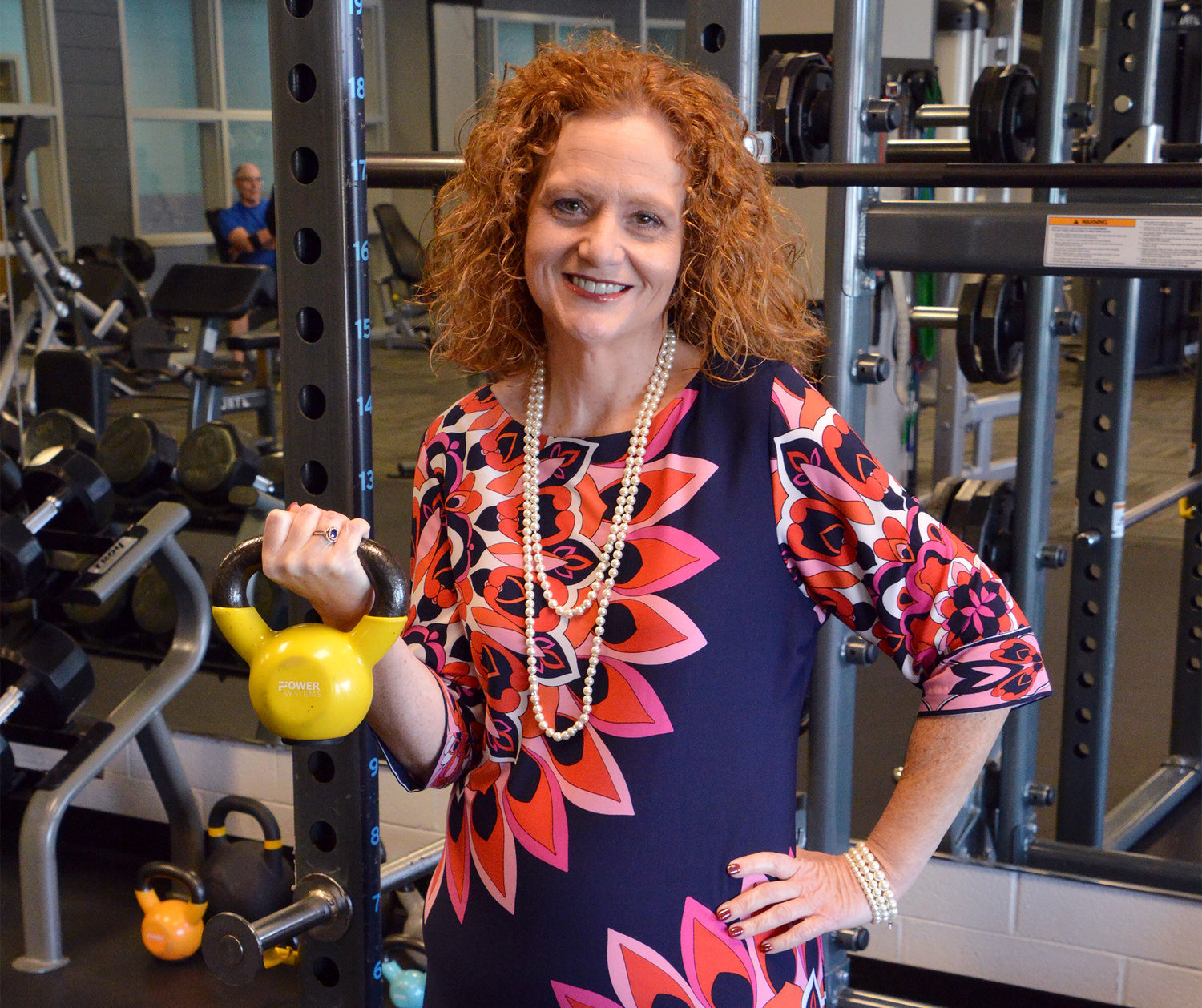 Marie Still, a staffer at the Georgia Baptist Mission Board, poses in a weight room. She has lost nearly 200 pounds over the past two years. (Index/Henry Durand)
Posted Wednesday, November 23, 2022 11:01 am

I’ve had to depend on God to help me not to go back to food as a coping mechanism. I have learned I don’t have to overeat to be happy. I have learned what ‘everything in moderation’ means.”
By ROGER ALFORD, The Christian Index

GRAYSON, Ga. – Marie Still is thankful for all that the Lord has given her, but, this Thanksgiving, she’s even more thankful for what He has taken away.

Still has lost 197 pounds over the past two years, an answer to prayer for a committed Christian lady who desperately wanted to improve her health so she could better serve Christ.

Colleagues at the Georgia Baptist Mission Board where she works have watched the 53-year-old transform into the energetic person she had hoped to become.

“It’s been wonderful to see Marie’s confidence and joy change over the past two years,” said Theresa Little, one of Still’s co-workers. “I love seeing her smile and laugh."

Still, a member of First Baptist Church in Loganville, said she came to realize that a food addiction was preventing her from being her best for the Lord, especially in her church's preschool ministry where she has to keep up with rambunctious 4-year-olds.

She said she was also feeling convicted that she wasn’t properly caring for her body, which 1 Corinthians 6:19 says is the temple of the Holy Spirit. She realized she was mistreating that temple by carrying around an extra 200  pounds, the weight of an average  refrigerator.

“I asked myself, ‘How can I effectively witness to others when my sin of overeating was so obvious?’” she said. “There’s a verse in Psalm 51 that says, ‘my sin is ever before me.’ And it was. I knew I had to die to the sin of overeating.”

On Thursday, when Still gathers with her family around a table spread with a traditional Thanksgiving feast, she’ll eat only a small portion of turkey and a few green beans. That’s the disciplined diet that has allowed her to lose so much weight.

“Marie is proof that beauty comes in all sizes,” said Bill Eastwood, retired chief information officer for the Georgia Baptist Health Care Ministry Foundation who has known Still for nearly two decades. “She is one of the kindest, most compassionate individuals I have ever known. She’s Christian through and through. There’s nothing more beautiful than that.”

But at her heaviest, Still didn’t feel beautiful.

“I’ve been overweight since I was in third grade,” she said. “All through school, people made fun of me. I vividly remember being at a fair that had carnival rides. I was too big to ride the ride, and the guy operating the ride mocked me in front of everyone. It was humiliating.”

That was one of many experiences that the Lord used to move Still closer to a life change.

“I could not be more proud of Marie,” said David Melber, the Georgia Baptist Mission Board’s chief operating officer. “She has demonstrated such a focused resolve to improve her health.  She has been an inspiration to all of our staff.”

At 27, Still was in a worship service at Chestnut Grove Baptist Church in Grayson where Steve Foster, now an evangelism consultant for the Georgia Baptist Mission Board, was preaching.

“The Lord convicted me of sin, and I went to the altar to pray,” she said. “That’s when I made Jesus Lord of my life.”

A year later, Still left her job at Kmart and became a state missionary for the Georgia Baptist Convention, working in accounting.

“I had been in church since I was a child,” she said. “I was there every time the doors were open. It was my safe place. But I had never imaged I’d get to make missions a vocation.”

The Lord had begun preparing Still for her role at the Mission Board when, during high school, she became a cashier at Kmart.

“It was supposed to be temporary, but it became very permanent,” she said. “I worked in lots of positions in my 11 years there, including customer service, layaway, returns, cash room, office manager, human resources and as a buyer.”

All of those responsibilities prepared her for what would become her ministry at the Mission Board.

While at Kmart, Still was longing for a Christian work environment, and one of her church friends told her about a position in the Mission Board’s accounting office. She applied.

“I had gone through the interview process, and I didn’t hear anything for a long time,” she said. “I thought I hadn’t gotten the job. Then, one day when I got home from work, there was a message on my answering machine telling me I had gotten the job.”

“I called Kmart my Egypt,” she said. “God had called me out of Egypt into the Promised Land. As a child, I had always wanted to be a missionary. And even though I work in an office and not out in the field, I am still a missionary.”

Even in the new role, Still continued to wrestle with her weight.

“I had doctors tell me, ‘if you don’t lose weight you’ll die,’” Still said. “I wanted to live. I wanted to have a better life.”

Still decided to undergo gastric bypass surgery to become the person she felt the Lord wanted her to be.

“The weight loss has definitely increased my energy levels,” she said. “I’ve had to depend on God to help me not to go back to food as a coping mechanism. I have learned I don’t have to overeat to be happy. I have learned what ‘everything in moderation’ means.”

Jill Johnson, another of Still’s co-workers and one of her chief encouragers, said Still’s resolve to become healthy has been nothing short of remarkable.

“Marie has been on a difficult journey, but she has faced it with determination and faith – determination to get the job done and faith to prepare her with the tools to complete the job,” Johnson said.

Still said she is now ready to share with others how God has worked in her life.

“It is still a daily challenge,” she said. “Overeating is just like any other sin that so easily besets us. Getting past it is a matter of dying to self every day.”
___

Still is available to share her story with women’s groups by calling 770-936-5348 or emailing mstill@gabaptist.org.