Mike Huckabee resigns after one day on the job

"The message here is 'Hate Wins,'" former Arkansas governor and Southern Baptist pastor Mike Huckabee wrote in his letter of resignation from the CMA Foundation Board. "Bullies succeeded in making it untenable to have 'someone like me' involved." MIKEHUCKABEE.COM/Special
Posted Monday, March 5, 2018 9:04 am
Gerald Harris 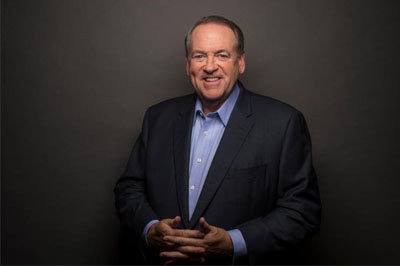 "The message here is 'Hate Wins,'" former Arkansas governor and Southern Baptist pastor Mike Huckabee wrote in his letter of resignation from the CMA Foundation Board. "Bullies succeeded in making it untenable to have 'someone like me' involved." MIKEHUCKABEE.COM/Special

The Country Music Association Foundation, the philanthropic arm of the CMA, appointed former Arkansas governor and former Southern Baptist pastor Mike Huckabee on the board of its foundation; an entity dedicated to growing and supporting music education programs across the country.

Huckabee was a great choice for the position because of his love for country music and his vital contributions to music education. According to the former governor’s own testimony music was a life changer for him.

Huckabee’s parents were poor, but sacrificed to give him an electric guitar when he was 11 years old. He explained, “The confidence I gained by playing, being in front of people, and competing against myself ... was transformative.”

As governor of Arkansas, Huckabee was a champion of public education in his state. He fought to provide programs for music and arts for every student in grades 1-12. He promoted the donations of musical instruments that were professionally refurbished and provided to students whose parents couldn’t afford to rent or purchase an instrument, allowing them to be in the school band. His advocacy of public school music and arts programs is legendary.

So, his selection to be on the board of the CMA foundation was logical, sound, wise, and certainly gave the foundation a strong and visible advocate.

However, the two-time U.S. presidential nominee remained on the CMA Foundation board for less than a day. He resigned with 24 hours of being selected to serve; and I don’t blame him one little bit. Why?

Jason Owen pitched a vinegar fit over Huckabee’s selection to the Foundation. Owen and his husband – both LGBT activists – have resurrected Monument Records as a part of Sandbox Entertainment in collaboration with Sony Music Entertainment.

Owen counts Midland, Little Big Town, Kacey Musgraves, Dan + Shay, Faith Hill, and others among his clients. Owen launched a vicious anti-faith attack against Huckabee, demanding that he go away because his involvement would harm the very kids the foundation was created to help. Whitney Pastorek, Sugarland’s manager, accused Huckabee of bigotry, racism, and sexism because of his belief in God’s designed plan for marriage between a man and a woman.

So, Owens and his allies, with their threats to withhold any future support for the CMA Foundation, were successful in forcing Mike Huckabee to step down less than 24 hours after his appointment.

In his letter of resignation, Huckabee wrote: “I genuinely regret that some in the industry were so outraged by my appointment that they bullied the CMA and the Foundation with economic threats and vowed to withhold support for the programs for students if I remained.

“I'm somewhat flattered to be of such consequence when all I thought I was doing was voluntarily serving on a nonprofit board without pay in order to my decades of advocacy for the arts and especially music. All of us," he went on, "have deep passions about our beliefs. I do about mine. But I hate no one. I wish upon NO ONE the loss of life or livelihood because that person sees things differently than me.

"If the industry doesn't want people of faith or who hold conservative and traditional political views to buy tickets and music, they should be forthcoming and say it. Surely neither the artists nor the business people of the industry want that."

"Until recently, the arts was the one place America could set aside political, geographical, racial, religious, and economic barriers and come together. If the arts community becomes part of the polarization instead of bridging communities and people over the power of civil norms as reflected in the arts, then we as a civilization may not be long for this earth."

Tony Perkins, writing for the Family Research Council, stated, “For Nashville, who's always counted the God-loving, gun-clinging ‘deplorables’ as its strongest base, this is a defining moment. Anyone who underestimates the buying power of patriotic America, especially after the last year-and-a-half, isn't paying attention. If country music joins Hollywood in its open attack on faithful America – a faithful America mighty enough to send Donald Trump to the White House – they're sealing their own fate.

“Surely the artists aligned with Owen and Pastorek saw what happened to the NFL. Roger Goodell's refusal to rein in his players and demand respect for the flag cost the league millions of dollars – and even more in brand power and credibility. He lost sponsors, ratings, and worldwide fans when he stood by and let the NFL disgrace the anthem and everything it stands for.

“If country music listens to these fringe voices and walks away from the relationship it's built with freedom-loving Americans, then look out. They're about to find themselves on the wrong side of a very determined coalition.”

Huckabee ended his letter of resignation on a very positive note. He concluded, “I hope that the music and entertainment industry will become more tolerant and inclusive and recognize that a true love for kids having access to the arts is more important than a dislike for someone or a group of people because of who they are or what they believe.

“My sincere thanks to the CMA Foundation for believing I had something to contribute. I regret that my presence caused controversy and threats to vital support for deserving kids. Kids wanting to learn music shouldn’t be the victims of adults who demand that only certain people can be in the room or be heard.

“I wish you nothing but good will and success at reaching students across America who need music as much as I did. At the end of the day, I’m not worth the fight, but the kids are. Never stop fighting for THEM!”