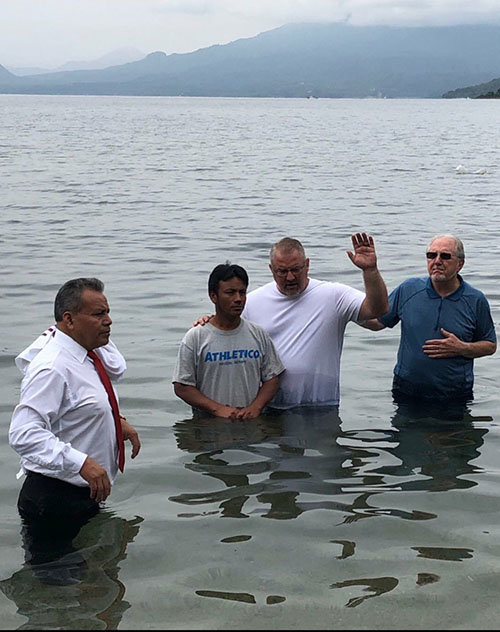 VILLA RICA — Georgia Baptist churches have been challenged to be Acts 1: 8 churches. In other words, our churches have been encouraged to think in terms of sharing the Gospel in their Jerusalem (their community), their Judea (Georgia), their Samaria (the U.S.A.) and the uttermost parts of the earth (our world.)

Many have become Acts 1:8 churches, but the news of what God is doing through First Baptist Church in Villa Rica is exceedingly heartwarming.

The church is reaching out to their Jerusalem (Villa Rica). The last two Sundays in June, according to First Baptist pastor Kevin Williams, the church received 64 new members into the fellowship of the church. Forty-four of the new members came on a transfer of their letter from another church, but 20 came on profession of faith and for baptism.

Additionally, the church had an incredible Vacation Bible School with 67 first-time decisions. Vacation Bible Schools provide an excellent opportunity for churches to reach the next generation, the current emphasis of the Georgia Baptist Mission Board – #reachingnextgen.

Recently the church prepared 2,500 meals for children in the Villa Rica school lunch program and 50-60 people delivered the lunches to the homes of the children. Every Wednesday First Baptist is the distribution center for the local food bank and scores of families come to the church for food they likely could never purchase. On Thursdays the church has a soup kitchen for indigent persons in the community.

The Gospel is always shared in some significant way through these various service ministries. 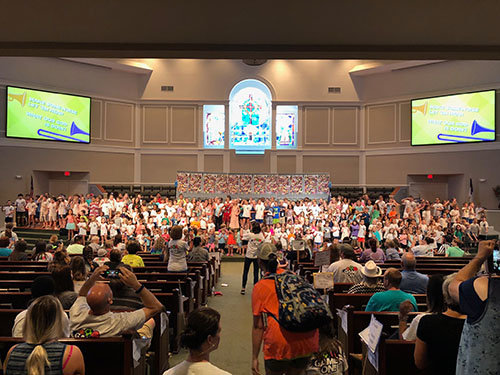 A very large number of children in attended Vacation Bible School at First Baptist in Villa Rica, where 67 made first-time decisions for Christ. VRFBC/Special

The church website explains that the best way to connect at First Baptist is through service. The church declares, “When we minister and serve according to our passions and gifting, we are glorifying God, furthering His Kingdom and fulfilling our purpose.”

The football coach at Villa Rica High School recently called Williams and asked if the team could come to the church for worship on the first Sunday in August. Williams responded in the affirmative and agreed to feed the team after the service. That will expose 109 football players and their coaches to the hospitality of the church and the Gospel of Jesus Christ.

When a church makes a concerted effort to serve a community, good things happen. When you love representing Christ in your community, the community will respond and opportunities to present the Gospel will follow.

FBC Villa Rica is reaching out to their Judea. They recently ministered to the Georgia Baptist Children’s Home by going to the campus in Palmetto and baptizing four of the several children who were saved in the church’s Easter production: “The Promise: A Passion Play.”

Williams said, “We don’t do as much in our Judea, unless we are asked to serve another church or invited to support another ministry in our state. We have 3,600 churches in Georgia and while we are willing to help other churches fulfill their mission, we don’t want to infringe on their turf or ministries unless we are invited to do so.” 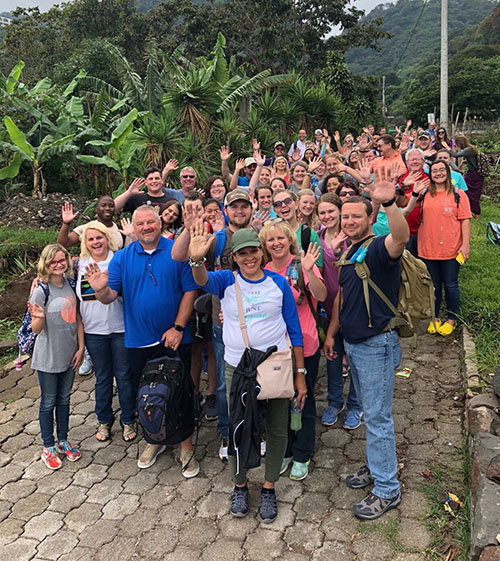 A mission team from First Baptist Villa Rica began their walk down a stone pathway to a baptismal service in a lake for the church they started in San Juan La Laguna in Guatemala. VRFBC/Special

First Baptist is also reaching out to their Samaria. The church’s senior adult choir recently returned from Charleston, S.C., where they were engaged in blessing the folks with their singing and service. Another team was on a mission trip to Kentucky.

Villa Rica First Baptist is also reaching out to the uttermost parts of the world. The church has just had a team of 60 members return from San Juan La Laguna, Guatemala where they planted a church three years ago. Nine new converts were added to God’s Kingdom during this visit and 48 have been baptized since the church was started in 2015. A new church building has been constructed and the church is alive and well.

Williams has helped enlist ten other pastors in Georgia and North Carolina who are helping plant additional churches in the same region where San Juan La Laguna is located.

Most Americans are probably aware of the recent volcanic eruption in Guatemala. The Fuego volcano erupted on June 3 and sent black and then red smoke racing above the horizon. Then there was the lava. The sound of boiling ash and rocks cascading down the slopes was terrifying. Williams stated that the pastor of the church in San Juan La Laguna told him that his wife and children were in their home in the path of the death-dealing lava flow.

The pastor and his wife were able to connect by phone and he told her to leave their home and go to another home nearby. The woman ran with her children to the home the pastor had specified.

At the last count five communities were destroyed by the eruption, 112 people have been killed, and 197 are still missing. The home to which the pastor’s wife had retreated for refuge also became vulnerable to the fiery lava flow, but they prayed for God’s intervention. Just before the incendiary lava reached the house it parted and one stream of the fiery lava passed the house on the left side and the other on the right side.

Williams stated, “The pastor said it was like God put his finger on that house and plot of land and protected them from the fiery blast.”

It was an incredible, indescribable miracle for God to spare that house and those people, but no more of a miracle than the ones he is performing at FBC Villa Rica Sunday after Sunday and day after day. There are people being rescued from an eternal fire through the preaching of Kevin Williams; and he is not afraid to tell it like it is.