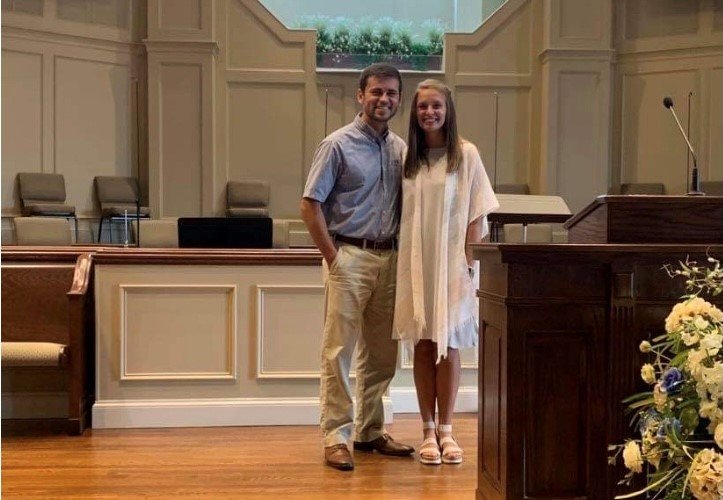 Hunter and Stephane Roe pose for a photo in their new church.

Cliff Coats, chairman of the Bremen pastor search team, commented, “Without going into detail I can surely say God allowed miraculous events to lead our committee to unanimously recommend Hunter Roe to our church family.”

Coats continued, “He went to the top of the heap of those who had been recommended once each committee member took a more thorough look and spent time in prayer. We thank God for ordering our steps and we are blessed beyond measure to have the Roe family coming to Bremen in August – all praise and glory to the Lord. We believe our new pastor (age 28) is maturing in the Lord at the opportune time to lead our congregation for year to come.”

Although Roe has served as a student pastor at the Moody Alabama church, members of the Bremen search team were impressed with Roe’s preaching ability and praised him for maturity beyond his years.

Added to his apparent preaching ability, Roe has given evidence of a heart of compassion. As a student at Troy University, he was among a group of 15 young men who walked 128.3 miles from Troy, Alabama to Panama City Beach, Florida as a philanthropic activity to raise money for wounded veterans.

In recalling that six-day trek, Roe, explained, “We had to carry all our supplies on our backs, but our inspiration came from hearing different testimonials from veterans who had been wounded while serving our country in Afghanistan and Iraq.”

Roe added, “I will forever be thankful for the memories made and the bonds formed with those men.”

Pell City, Alabama is Roe’s hometown; and he lived there until he moved to Troy for college. He explained, “God blessed me with Christian parents who raised my younger sister and me in a God-fearing home. My father James (Jimbo) Roe is a dentist and my mother (Wanda) worked for him, which allowed her to have the flexibility to be home with us after school ended each day.

“We spent a lot of time riding our bikes in the neighborhood, swimming in Logan Martin Lake; and I also enjoyed playing baseball and football. I'm thankful to have grown up in a loving home where Christ was given the place of preeminence.”

The new Bremen First Baptist pastor avows that his parents and his pastor, John Thweatt, of First Baptist Pell City, greatly influenced his life. He commented, “As an eight-year-old boy, my pastor explained the Gospel to me, and by God’s grace, I repented of my sins and placed my trust in Jesus Christ to save me. God began the work; He is continuing the word, and by God’s grace, He will complete the work” (Philippians 1:6).

While Hunter had thought about following in his father’s footsteps and becoming a dentist, it was the call into the ministry that won out. The youthful Bremen pastor professed, “There was a strong internal restlessness and subjective understanding that God's will for my life was the ministry and not dentistry. God gave me a growing desire to preach His Word. I surrendered to the call to Gospel ministry, changed my major and began to make plans to enroll in seminary upon graduation from Troy University.

Before the call to Christian ministry, Stephanie Noah came into Hunter Roe’s life. Like Hunter, Stephanie grew up in Pell City, Al, and they were in the same class in school. Hunter explained, “In our junior year of high school we had nearly every class together, and after one date, I asked her to be my girlfriend.

We dated all through the remaining part of high school, college and were then married shortly after college graduation.”

Hunter describes his wife as “a gentle, quiet, and sincere woman of God. She is a woman of integrity, conviction and strives to please God and fear Him above all.”

Stephanie has her own “calling”. She has taught in a private Christian school as a well as in public education; and she regards her role as a teacher as her ministry rather than a job. Her commitment to her vocation is evident and she was awarded the “Teacher of the Year” for Odenville Elementary School for the 2019-2020 school year. Hunter added, “The love of Jesus shows through her, and I am so proud of my wife and encouraged by her example of loving kids regardless of their home situations and backgrounds.”  The Roe’s have two children of their own, Luke (age 3) and Emma Jane (age 1).

Roe has a Bachelor of Science in History from Troy University and a Master of Divinity in Christian Ministry from Southern Baptist Theological Seminary. He is currently working on a Doctor of Ministry in New Testament Exposition from SBTS and expects to graduate in May 2022.

The Pell City native understands that he is following a beloved pastor with a long tenure at the Bremen church, and astutely stated, “I am grateful to God for the faithful legacy and ministry of Pastor Herman Parker. He obviously helped contribute greatly to the health and life of First Baptist Church. He is a faithful man of God who preached God’s holy Word with conviction and shepherded God’s people with a servant’s heart. I pray that I can learn from his example and emulate his strong model of leadership.”

When asked about his vision for his ministry in Bremen, Roe remarked, “My primary focus will be on the ministry of God’s Word. By God’s strength and grace, I pray to rightly divide the Word of God and minister under the authority of God’s Word. I’m reminded of Martin Luther’s famous quote with reference to exposing the errors of the papacy, “I did nothing, the Word did everything.

Roe concluded by explaining, “My confidence rests solely in God alone and in His inerrant and infallible Word. With the Word of God as our sole authority, the focus of our ministry will be to love God and love people.”