Moldovan Baptists take sheets off their beds for Ukrainian refugees 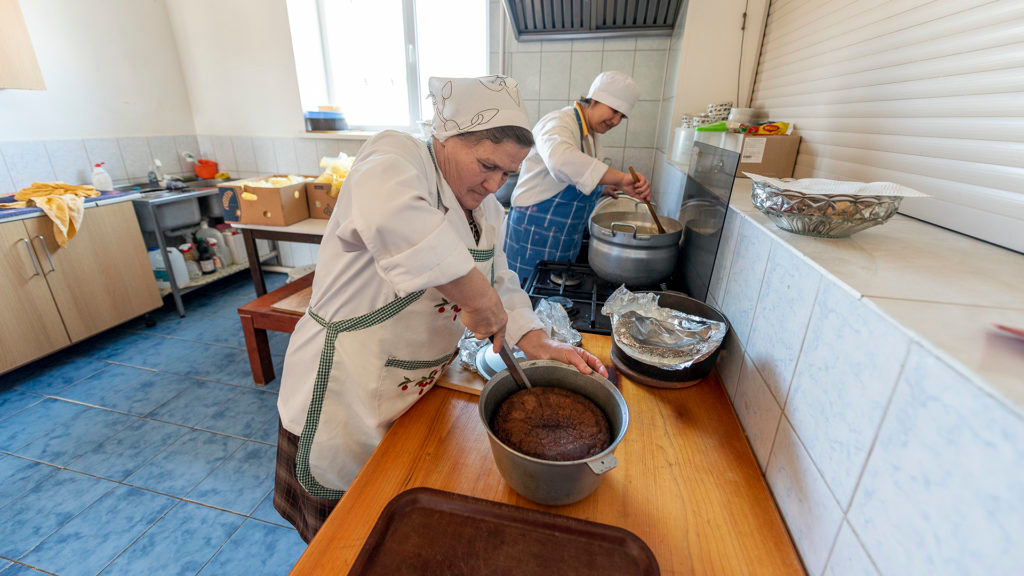 Church members at Dancu Baptist Church prepare food for Ukrainian refugees who are staying in the church. These women are volunteering their time to provide three meals a day. (IMB Photo) 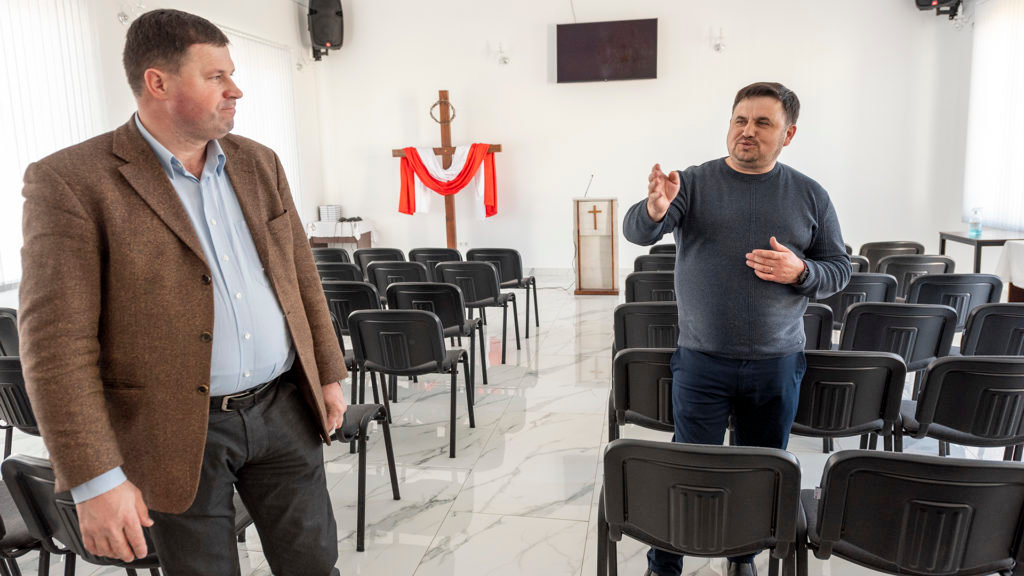 Pastor Ion Burlacu, right, shares with Ion Miron, the Baptist General Secretary of the Moldovan Baptist Union, how his church built this chapel in a day as a place of worship for refugees and church members and to create space in the original building for refugees to stay. (IMB Photo) 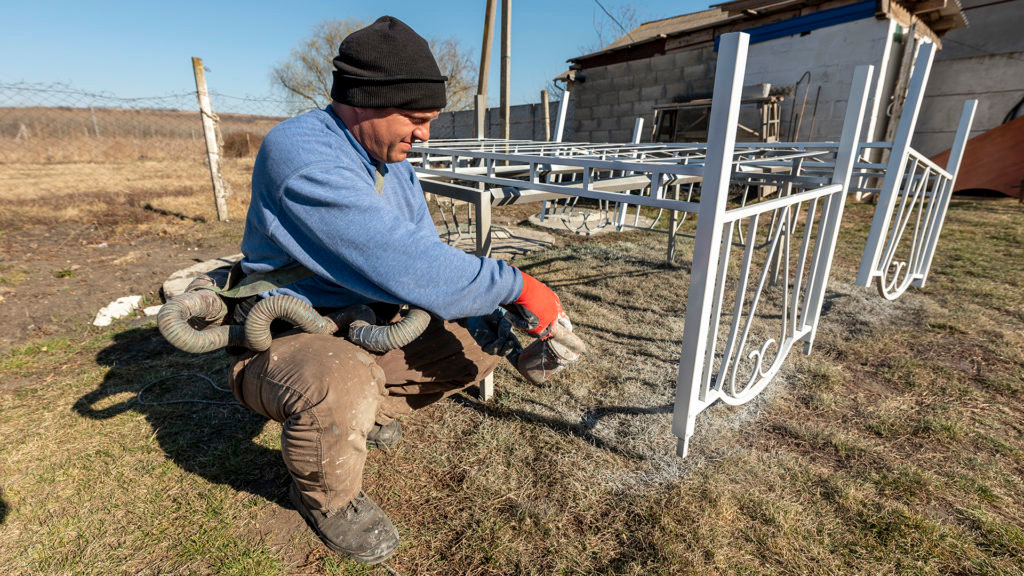 A Moldovan believer paints a newly built bed that will be used by Ukrainian refugees in Bozieni Children’s Home in Bozieni, Moldova. (IMB Photo) 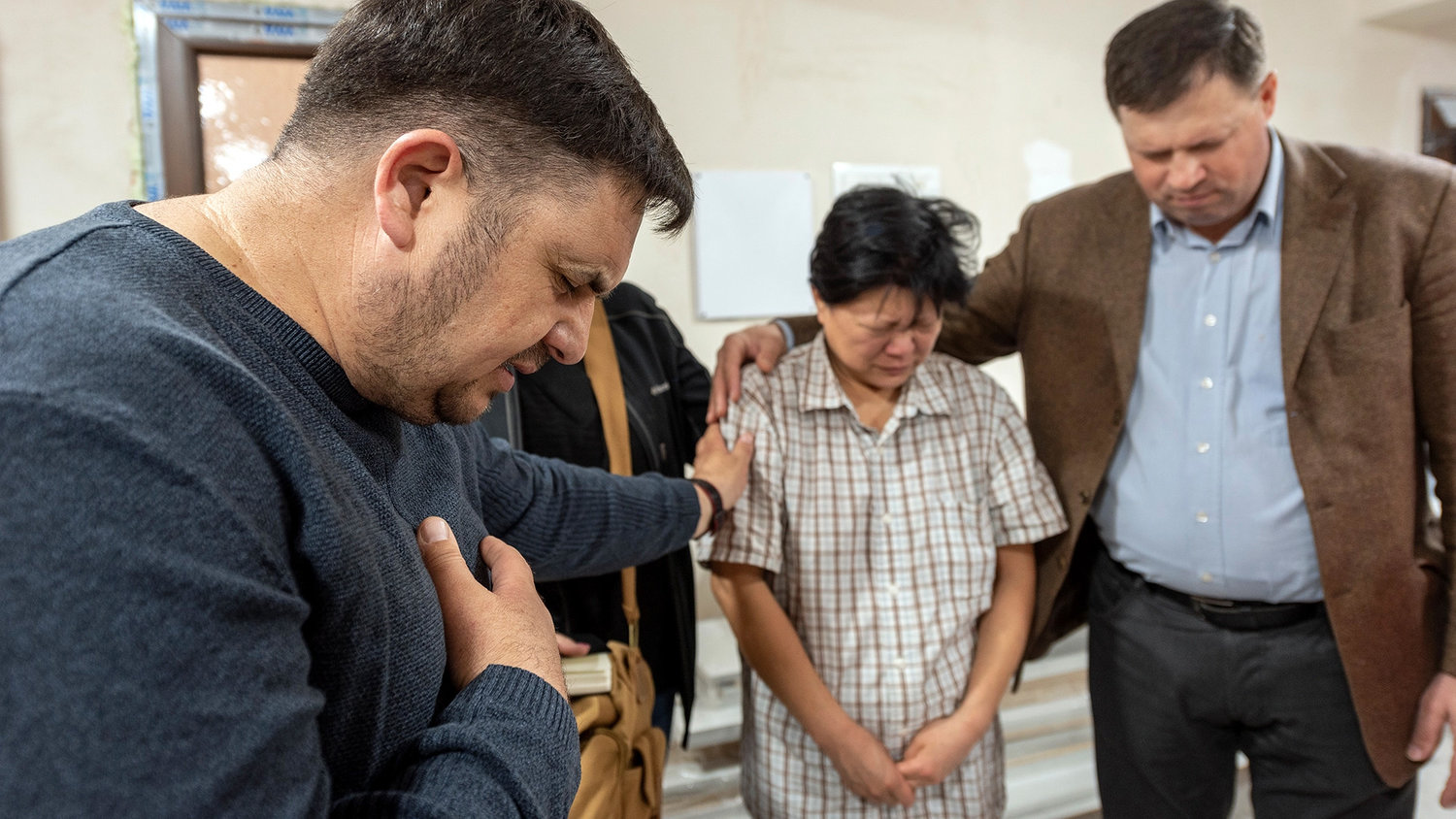 Ion Burlacu, left, and Ion Miron, right, pray for a Ukrainian-Korean woman staying in Bozieni Children’s Home. Burlacu is a pastor and director of the children’s home, and Miron is the Baptist General Secretary of the Moldovan Baptist Union. The woman and her family fled the violence in Ukraine and found refuge in the children’s home. (IMB Photo)
Previous Next
Posted Friday, May 13, 2022 9:05 am
By International Mission Board

Moldova, a small and impoverished nation bordering Ukraine, has received an estimated one refugee for every 25 Moldovans. Most refugees are being housed and cared for by churches in the Moldovan Baptist Union.

The Moldovan Baptist Union has more than 400 churches. When Russia invaded Ukraine, Moldovan Baptists worked quickly to create a safe space for refugees – constructing a chapel hall in a day, building an attic to accommodate more refugees, using a children’s summer camp as a refuge and summoning volunteers to cook three meals a day.

Already known for their hospitality, Moldovans’ generosity only increased after refugees began to make haggard journeys across the border. Elderly men and women stripped the sheets off their beds to give to refugees. Gas prices emptied wallets, but that didn’t stop Moldovan churches from sending vans to the border to pick up refugees.

Moldova was once an agricultural mecca and was viewed as the breadbasket of the Soviet Union, with farmland with rich soil and grapevines that stretch for miles. When the Soviet occupation ended, Russia took all the farm equipment and infrastructure that once made Moldova so prosperous. The economic consequences were devastating – Moldova has Europe’s lowest GDP per capita.

For Moldovan Baptists, it was never a question of whether they would give whatever it took to help Ukrainians. Jesus said to love their neighbor, and they are indeed loving their neighbor.

Slavic Duman is the pastor of Dancu Baptist Church in Dancu, Moldova. The congregation converted their church into a sanctuary for refugees. The church was recently remodeled, and just in time. They are now equipped to house refugees who either stay for a short time or long term.

In addition to housing refugees, the children’s home and the church provides counseling.

“We came to these people. They are poor. How will they take care of us?” Duman heard from some refugees. “They know that Moldova is a poor country, and they don't want to be a burden for us.”

“We have so many brothers and sisters in Christ from America and other countries that pray for you. They are helping us so that we can help you,” Duman tells them.

Providing beds, a chapel and Jesus

After realizing the immense need for housing, Ion Burlacu, a pastor and the director of Bozieni Children’s Home in Bozieni, Moldova, converted the second floor of the building to house refugees. And, realizing the opportunity they had to minister spiritually to refugees, they built a chapel in one day. With the new paint smell lingering, the church was immediately put to use. The children’s home can house 117 people. By the end of March, the church had housed 214 refugees.

Outside the church, men were quick to work. The metallic whir of metal grinders reverberated as workers built metal bed frames to hold the donated mattresses. Workers were also in the eaves moving plywood to build an attic to place more mattresses.

Over a feast of freshly prepared traditional Moldovan food, and with the presentation of a fine-dining restaurant, Burlacu said the refugees asked why they were going to such great lengths.

“This question is how we start our discussion with them and present Christ to them,” Burlacu said.  Every refugee who passes through the children’s home hears the gospel and many want to know more.

“If they come today, and we know that tomorrow they will go, we will do our best, everything we can, to share the gospel, because we don't know if they will have another chance to hear the gospel,” Burlacu said.

He said refugees ask difficult questions like, “Why is this happening,” and “Why would God let this happen?”  He said they don’t have the answers, but they tell them they know God is in control.

A Ukrainian-Korean woman staying in the home said she and her daughters and grandchildren walked nine miles to the border in the cold and found a van from Bozieni Children’s Home.

The matriarch broke down and covered her face to hide her pain and tears.  “We walked so far, so, so far,” her voice broke, the journey weighing heavily on her.

During Stalin’s reign, Koreans living on the Russian side of the border of Russia and North and South Korea were scattered and dispersed across the Soviet empire to prevent any uprisings and dissent. Many Koreans were relocated to Uzbekistan, Kazakhstan, Tajikistan and some, like this family, moved to Ukraine.

Faced with another generational forced migration, the Korean-Ukrainian family found solace in a Moldovan children’s home.

Burlacu said they take to heart Matthew 7:1. They treat neighbors as they want to be treated.  “The whole church understood this is our calling,” Burlacu said.

Their calling to serve does not have a time limit. Refugees in both Bozieni Children’s Home and Dancu Baptist Church can stay as long as they want.

“We want to acknowledge that we are a bit tired, but at the same time, we also feel encouraged. We have gratitude, their thanks and their hugs. It shows us how grateful they are and how encouraged they are. The church also understands how God works through us during this time,” Burlacu said.

“We are more encouraged than tired. Tiredness is for a short time, but the joy we experience is for eternity,” he continued.

‘Open your mouth and let the fire of God’s Word come out,’ Mohler exhorts graduates

‘Every square inch of the universe belongs to King Jesus,’ Akin tells graduates