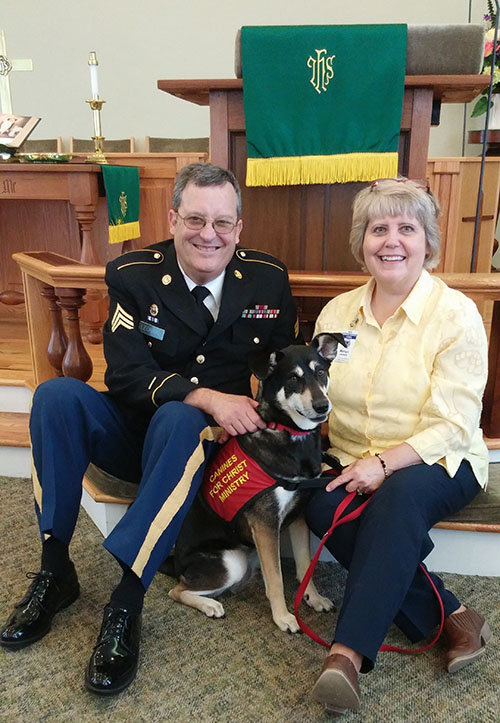 Ron and Marilyn Leonard, along with Molly, serve as Mission Service Corps missionaries through the North American Mission Board. RON LEONARD/Special

ALPHARETTA — A therapy dog frequently visits Beverly Harper in the Newnan Hospital Nursing and Rehab Center in Newnan. Mrs. Harper has had several strokes and has been severely debilitated. As almost anyone in her condition she has to fight against depression and discouragement.

When the therapy dog comes it turns Mrs. Harper’s depression into delight, her gloom into gladness, and her sadness into smiles. The transformation is obvious.

The therapy dog in Newnan goes into different rooms and always brings an indescribable amount of joy, emotional relief, and healing to the patients. These dogs also provide incredible help to those who have experienced Post Traumatic Stress Disorder.

There is no evidence to indicate that Daniel Somers had access to dog therapy, but it might have prevented him from taking his life.

Daniel Somers was a veteran of Operation Iraqi Freedom and part of Task Force Lightning, an intelligence unit in the Gulf War. He ran hundreds of missions as machine gunner in the turret of a Humvee.

In addition to PTSD Somers had been diagnosed with traumatic brain injury, fibromyalgia, and a host of other medical problems. CNN reported that he sought treatment through therapy, medication, music, and film production, but took his own life on June 10, 2013.

Somers had everything to live for – a sharp mind, the ability to pick up new skills quickly, extraordinary computer skills, songwriting ability, and a loving wife, Angel, whom he had started dating as a young teenager, but PTSD robbed him of his unique gifts and his life.

In his despair he wrote a suicide note which became viral and was published in part by CNN. This is what he wrote prior to taking his life:

My body has become nothing but a cage, a source of pain and constant problems. The illness I have has caused me pain that not even the strongest medicines could dull, and there is no cure.

All day, every day I sense a screaming agony in every nerve ending in my body. It is nothing short of torture. My mind is a wasteland, filled with visions of incredible horror, unceasing depression, and crippling anxiety.

PTSD is a serious potentially debilitating condition that can occur in people who have experienced or witnessed not only the horror of war, but terrorist attacks, natural disasters, serious accidents, the sudden death of a loved one or similar catastrophes.

The Anxiety and Depression Association of America suggest that the primary treatments for Post Traumatic Stress Disorder are psychotherapy, medications, or both. 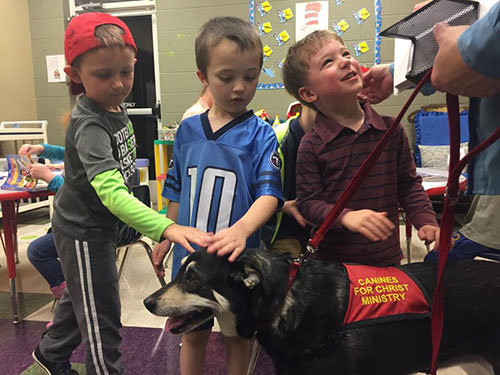 Molly is quite popular with children as well. RON LEONARD/Special

However, the ADAA may have omitted one of the most effective treatments available to those who suffer from PTSD – dog therapy. Beverly Harper would likely suggest that those suffering from PTSD should invite and welcome dog therapy.

Molly, a certified therapy dog with Canines for Christ and owned by Ron and Marilyn Leonard, has brought joy to children with special needs at Camp Progress in Nashville, TN and provided invaluable assistance to those struggling with PTSD.

Ron, Marilyn, and Molly serve with the North American Mission Board in the Mission Service Corps. They are members of the Victory Baptist Church in Mount Juliet, TN.

Ron and Marilyn are also affiliated with an organization called Canines for Christ, a Christian-based, animal-assisted therapy ministry that uses ordinary people and their beloved dogs to share God’s message of love, hope, kindness, and compassion to those in need. “Canines for Christ” has 700 volunteers in 29 states and three countries.

Ron Leonard explained, “We serve with NAMB as MSC missionaries to our military men and women. We also minister to our veterans and others struggling with PTSD along with our therapy dog Molly. In fact we have made over 1,300 visits in an effort to make a lasting difference in the lives of those who are in the middle of the storm.

“Over 35 percent of our military men and women are suffering with some form of PTSD. There are 22 veterans who tragically commit suicide every day in the United States. That is 154 every week and one every 65 minutes. However, when we get a therapy dog involved the suicides are reduced almost to zero.

“But we not only minister to those suffering with PTSD, we also share about responsible pet ownership from a biblical worldview; and we are constantly praying that our stage is always an altar.”