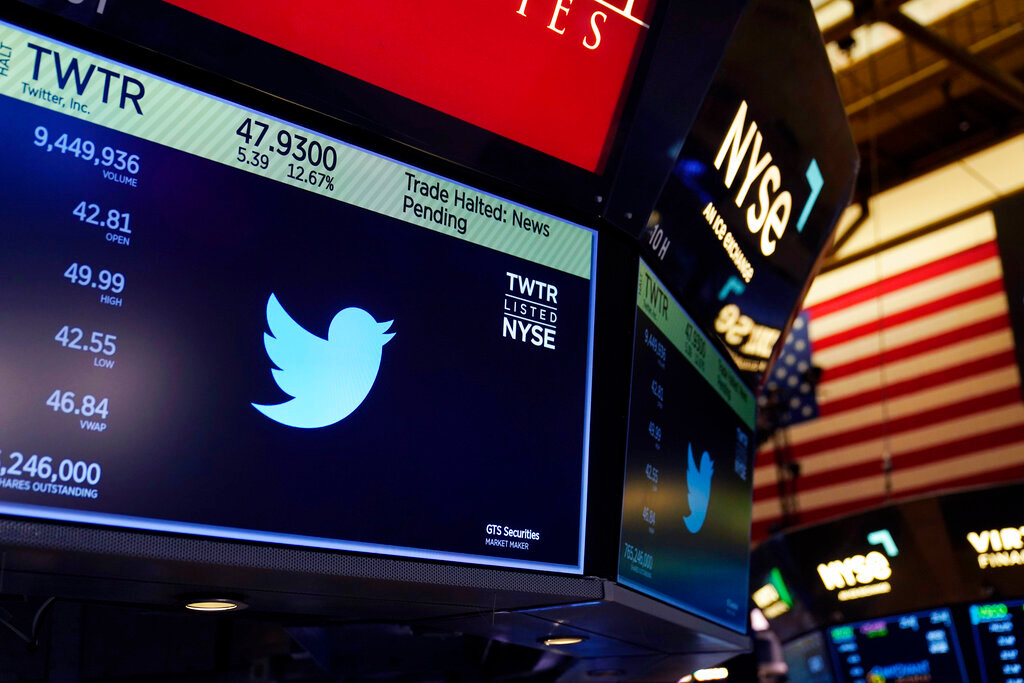 Elon Musk is abandoning his legal battle to back out of buying Twitter by offering to go through with his original $44 billion bid for the social media platform.

The mercurial Tesla CEO made the offer in a letter to Twitter, which the company disclosed in a filing Tuesday with the U.S. Securities and Exchange Commission.

The offer comes just two weeks before Twitter's lawsuit seeking to force Musk to go through with the deal goes to trial in Delaware Chancery Court.

In a statement, Twitter said it intends to close the transaction at $54.20 per share after receiving the letter from Musk.

Trading in Twitter's stock, which had been halted for much of the day pending release of the news, resumed trading late Tuesday and soared almost 22% to $51.80.

Musk’s proposal is the latest twist in a high-profile saga involving the world’s richest man and one of the most influential social media platforms. Much of the drama has played out on Twitter itself, with Musk — who has more than 100 million followers — lamenting that the company was failing to live up to its potential as a platform for free speech.

A letter from Musk’s lawyer dated Monday and disclosed by Twitter in a securities filing said Musk would close the merger signed in April provided that the Delaware Chancery Court “enter an immediate stay” of Twitter’s lawsuit against him and adjourn the trial scheduled to begin in two weeks.

By completing the deal, Musk essentially gave Twitter what it was seeking from the court — “specific performance” of the contract with Musk, meaning he would have to go through with the purchase at the original price. The contract Musk signed also has a $1 billion breakup fee.

Eric Talley, a law professor at Columbia University, said he’s not surprised by Musk’s turnaround, especially ahead of a scheduled deposition of Musk by Twitter attorneys starting Thursday that was “not going to be pleasant.”

“On the legal merits, his case didn’t look that strong,” Talley said. “It kind of seemed like a pretty simple buyer’s remorse case.”

If Musk were to lose the trial, the judge could not only force him to close the deal but also impose interest payments that would have increased its cost, Talley said.

What did surprise Talley is that Musk doesn’t appear to be trying to renegotiate the deal. Even a modest price reduction might have given Musk a “moral victory” and the ability to say he got something out of the protracted dispute, Talley said.

Musk has been trying to back out of the deal for several months after signing on to buy the San Francisco company in April. Shareholders have already approved the sale, and legal experts say Musk faced a huge challenge to defend against Twitter's lawsuit, which was filed in July.

Musk claimed that Twitter under-counted the number of fake accounts on its platform, and Twitter sued when Musk announced the deal was off.

Musk’s argument largely rested on the allegation that Twitter misrepresented how it measures the magnitude of “spam bot” accounts that are useless to advertisers. Most legal experts believe he faced an uphill battle to convince Chancellor Kathaleen St. Jude McCormick, the court’s head judge, that something changed since the April merger agreement that justifies terminating the deal.

Legal experts said Musk may have anticipated that he would lose. Things haven't been going well for him in court recently, with the judge ruling more frequently in Twitter's favor on evidentiary matters, said Ann Lipton, an associate law professor at Tulane University. The judge denied several of Musk’s discovery requests, Lipton said.

It's also possible that Musk's co-investors in the deal were starting to get nervous about how the case was proceeding, she said.

Musk’s main argument for terminating the deal – that Twitter was misrepresenting how it measured its “spam bot” problem – also didn’t appear to be going well as Twitter had been working to pick apart Musk’s attempts to get third-party data scientists to bolster his concerns.

Twitter now has options in the case and doesn’t necessarily have to accept a new offer from Musk, said Robert Anderson, a law professor at Pepperdine University.

“Twitter could still be concerned that the same thing might happen again without some additional security,” Anderson said. “They’re going to want some assurance that the deal is going to happen right away."

Mysteriously, neither Musk nor Twitter CEO Parag Agrawal have written anything about the deal on Twitter, where many developments in the dispute have been aired. Many of Musk’s tweets in the past 24 hours have been about a divisive proposal to end Russia’s invasion of Ukraine, drawing the ire of Ukrainian President Volodymyr Zelenskyy.

Musk argued in a tweet Monday that to reach peace Russia should be allowed to keep the Crimea Peninsula that it seized in 2014. He also said Ukraine should adopt a neutral status, dropping a bid to join NATO following Russia’s partial mobilization of reservists.

If the deal does go through, Musk may be stuck with a company he damaged with repeated statements denouncing fake accounts, Susannah Streeter, senior markets analyst for Hargreaves Lansdown in the United Kingdom, wrote in an investor note. “This is an important metric considered to be key for future revenue streams via paid advertising or for subscriptions on the site, and his relentless scrutiny of Twitter’s figures over the last few months is likely to prompt questions from potential advertising partners," she wrote.