Nate Pristavec: Champion on the mat becomes a champion for the Master

Brenton-Parker Head Wrestling Coach Tim Mitchem, right, says Nate Pristavec "is a leader, the kind of guy every team wants." Pristavec is holding an award as East Region Wrestler of the Year (similar to MVP) for a tournament at Life University in Marietta, where he also received the Championship of Character Award. BPC/Special
Posted Thursday, April 6, 2017 10:36 am
Gerald Harris

Brewton-Parker Head Wrestling Coach Tim Mitchem, right, says Nate Pristavec "is a leader, the kind of guy every team wants." Pristavec is holding an award as East Region Wrestler of the Year (similar to MVP) for a tournament at Life University in Marietta, where he also received the Championship of Character Award. BPC/Special

MOUNT VERNON – Camden County championship wrestler Nathen “Nate” Pristavec wasn’t sure where he wanted to go to college. He just knew he wanted to become a collegiate wrestler. He was second among Georgia wrestlers in the 6A high school classification, but no one was recruiting him.

Since his phone was not ringing from college wrestling coaches Nate had just about decided to enlist in the military. However, Brewton-Parker College contacted him and offered him a scholarship to wrestle.

He admitted, “I did not come to BPC because I wanted to be in a Christian college. I only came to wrestle. 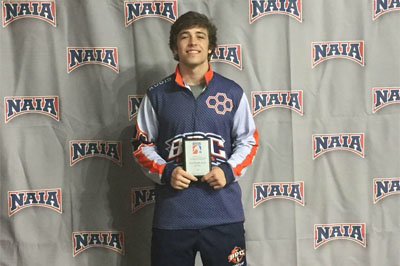 Nate Pristavec holds his All American plaque that he received at NAIA nationals. BPC/Special

“My family attended a Baptist church when I was very young. I remember going to activities for children; and I was baptized when I was about ten-years-old, but I am not sure I was really saved at that time.”

Nate continued, “When I was in middle school my family had a bad experience in the church, so we stopped going to church for awhile. During those years away from church I wandered away from God. I turned away from God; and in high school I considered myself an atheist and believe science was the answer to everything.

“I went through a dark phase in high school and just wanted to fit in with the 'cool'  kids at school. I started drinking and was at some kind of party every weekend. I eventually discovered that the people I thought were my friends were not friends at all.

“I met a girl named Zoey in the 10th grade and we started dating. because of my drinking I ended up hurting Zoey emotionally in several ways, which resulted a bad break-up that lasted for six months.

“Zoey and I eventually got back together. After she took me back I realized that drinking was stupid and I wanted to be better. It was not easy, because a change in lifestyle results in a change of relationships. It is not easy to stand against the current by yourself; and I didn’t see any of the other kids who wanted to be better.” 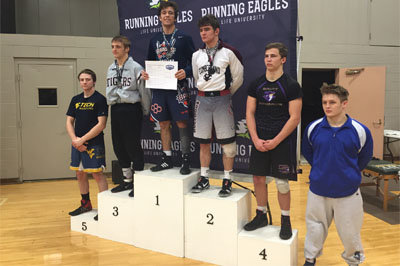 Nate added, “Once I got to Brewton-Parker all I wanted to do was wrestling. I didn’t know what I wanted to major in so I just picked business, because I thought that would be good for anything I decided to do with my life.

“I was selected as the captain of the wrestling team as a freshman; and had a great season. In fact, I had the best record on the team as a freshman, but I got injured at regionals and did not make it to the nationals.

“We were expected to go to chapel, but as a result of that I was reminded of who Jesus is and what He did for me. Many people took an interest in me, especially Baptist Campus Minister Youmans, who was the one God used to actually led me to Christ. It was during my sophomore year that I decided to give my life to Christ and after that I did a complete 180-degree turnaround. I forsook my old way of life and stated putting God as my first priority.

“Once I started pursuing God, I became hungry to know Him, so I switched from a business major to a Christian studies major. I became a leader of the Baptist Collegiate Ministry. Although I had a great year in wrestling, it was no longer my first priority. However, as a sophomore I ended up taking 5th in the nation in the 157 pounds weight class in the college NAIA division.

“Last summer, before the beginning of my junior year Zoey and I got married. Life was a challenging year, because I was a full time student, full time athlete, full time husband and I was working 25-30 hours a week. It was a difficult schedule, but I gave all my worries to God; and He helped me through it.

“All of this season I was ranked 2nd in the nation in the 157 pound weight class. I was winning all my matches and was headed for a national championship, but at the end of the season, right before regional I was wrestling the number one wrestler in my weight class and somehow in some freak accident I dislocated my hip during the second period and I could not finish the match. The EMTs took me to the hospital in an ambulance. The doctors eventually put my hip back into place and informed me that it would not be wise to continue wrestling. 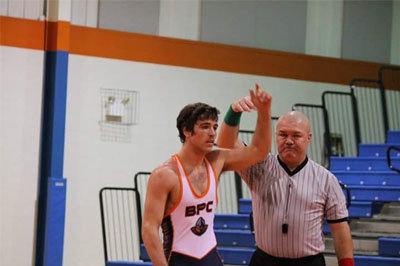 “My scholarship pays for most of my school, but now I can’t wrestle. I am not worried or upset, because I know that God will provide for me and Zoey and we will be fine. I am not upset that I can’t wrestle, because God has already been opening new doors in my life I just got a job as a part-time youth pastor at Bay Springs Baptist Church in Adrian."

Nate concluded, “I am stepping out on faith and trusting God to lead me. I am currently growing so much in my faith; I can constantly see God working in my life and God is using BPC to grow me into a Godly man. I do not know what I want to do with my degree, or what kind of job I want to have, but I am trying to listen for my call and I am trying to be obedient to God’s will.”

Brewton Parker’s head wrestling coach, Tim Mitchem, stated, “Nate Pristavec is a leader – the kind of guy every team wants. He made everyone on our team better. He led a Bible study for our team; and when he got hurt, he came to me and said, ‘Coach, I’m sorry.’ He was not thinking about himself. He was thinking of the team.”

BPC President Steve Echols said, “Nate Pristavec is one of the most outstanding students on our campus – a real champion for Christ. His dedication is an inspiration to us all.”