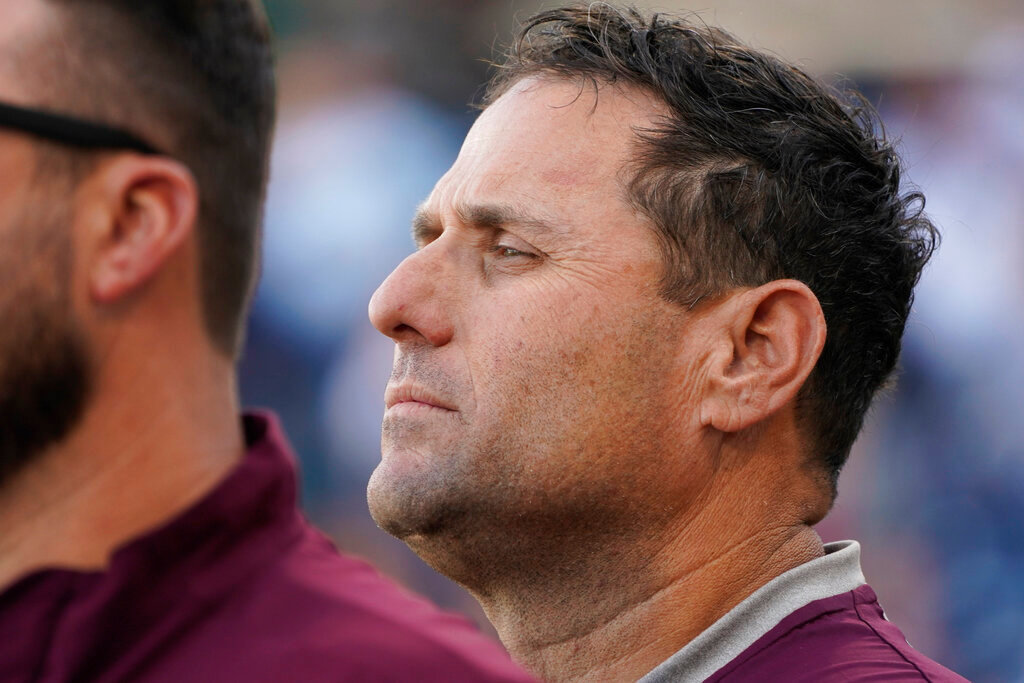 Mississippi State coach Chris Lemonis listens to the singing of the national anthem prior to the start of the Governor's Cup NCAA college baseball game against Mississippi, April 26, 2022, in Pearl, Miss. Mississippi State has lost five straight games and is in danger of becoming the fifth national champion since 2007 to not make it back to the next NCAA Tournament. (AP Photo/Rogelio V. Solis)
Posted Tuesday, May 10, 2022 2:31 pm
By ERIC OLSON, Associated Press

Defending national champion Mississippi State, which has made it to the last three College World Series as one of the final eight teams standing, will be hard-pressed to even make an NCAA regional this year after losing three straight at home to Florida over the weekend.

Mississippi State (25-23, 9-15 SEC) has lost five in a row and is last in the SEC West and 102nd in the RPI with conference series remaining against Texas A&M on the road and Tennessee at home.

MSU is in danger of becoming the fifth national champion since 2007, and first since Coastal Carolina in 2017, to not make the following NCAA Tournament.

“We all know we’re going to have to go on a crazy run and we’re more than capable,” second baseman RJ Yeager said. “I think everybody believes we can and we’re ready to get back after it.”

MSU has run into hard luck on multiple fronts. Landon Sims, promoted to No. 1 starter after being sensational out of the bullpen last year, was the first of three pitchers to sustain elbow injuries requiring Tommy John surgery. Stone Simmons and Brooks Auger followed. The healthy relievers have combined for a 6.98 ERA.

The Florida series illustrated the struggle. The teams were tied 1-1 Sunday before the Bulldogs gave up a combined five runs in the eighth and ninth innings in a 6-2 loss. Saturday's game was tied 3-3 entering the ninth before the Bulldogs allowed six runs and lost 9-3.

“We just haven't been good late in that bullpen,” coach Chris Lemonis said. “It comes back to get you. It's been tough. Sometimes you lose when you play good all game and then you lose it at the very end. It's demoralizing a little bit.”

MSU is the SEC's top defensive team, and it has put up good power numbers. Yeager, a graduate transfer from Mercer, and freshman Hunter Hines have combined for 30 of the Bulldogs' 84 homers in 48 games. MSU totaled 75 in 68 games last year.

There's been a lack of timely hitting, though. The Bulldogs were 7 of 32 (.218) with runners in scoring position in the three games against Florida; they left a combined 19 runners on base in the Friday and Saturday losses.

The Bulldogs lost their top two hitters from the championship team in Tanner Allen and Rowdey Jordan. They also lost a first-round draft pick and CWS Most Outstanding Player in staff ace Will Bednar and another 100-strikeout pitcher in Christian MacLeod.

“It's tough for guys who have had to step up in a different job," Lemonis said. “When you lose somebody, it pushes everybody forward and puts everybody in a different spot. There’s been some adjustment to that and we probably haven’t adjusted as well as we should.”