NFL’s Don Hansen was never allured by the limelight 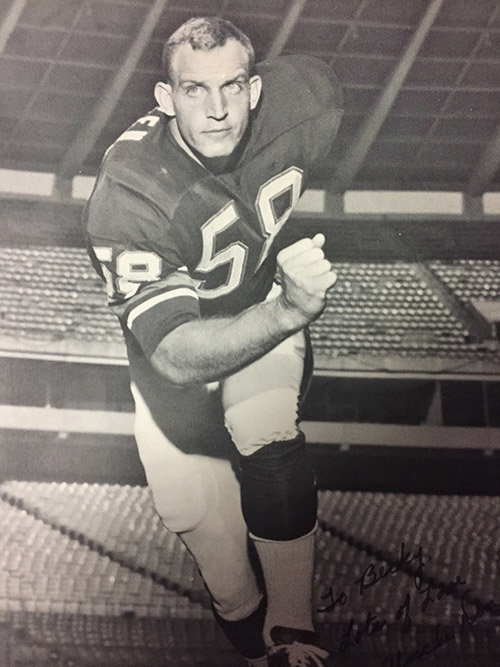 Don Hansen was drafted by the Minnesota Vikings, playing there from 1966-67 before later joining the Falcons when former Minnesota head coach Norm Van Brocklin moved to Atlanta. DON HANSEN/Special

SNELLVILLE — Don Hansen had a formidable, impressive, and very successful college and professional football career, but not to hear him tell it.

In a recent interview with Hansen he seemed reluctant to talk about his achievements on the gridiron. Even though he is now 72 years old, Hansen still has the form and physique reminiscent of an intimidating NFL linebacker who could be a menacing presence to a tight end coming across his territory or a defensive impediment capable of delivering a helmet-jarring tackle to a running back coming across the line of scrimmage.

Today, the former Minnesota Vikings Rookie of the Year and Atlanta Falcons Player of the Year is a member of Annistown Road Baptist Church, where he has taught Sunday School and is currently a member of their pastor search team.

Don met Sandy, the girl who became his wife, in high school. They dated for four years and got married when Don was a sophomore in college. They will soon be married 54 years, are the parents of three grown children, grandparents to 11 grandchildren, and have three great-grandchildren.

Hansen was a three-year letterman in football at F.J. Reitz High School in Evansville, IN where he was also All-City, ALL-SIAC (Southern Indiana Athletic Conference), and All-State in football in both his junior and senior years. During his senior year, Reitz High School’s football team was undefeated and did not even allow an opposing team to score.

In high school he was also awarded the Kiwanis Football Award and was a Scholastic All-American. He also was a four-year letterman in baseball and has been inducted into the Indiana Football Hall of Fame.

Hansen accepted a scholarship to play football at the University of Illinois, where he also became a three-year letterman. He went there as a fullback, but after two knee injuries his freshman year was moved to a linebacking position on defense.

As a stalwart for the Fighting Illini, he was part of the Big Ten Championship team in 1963 that beat the University of Washington in the Rose Bowl. He was selected for the All-Big Ten team in 1965. While at Illinois he was also chosen to play in the East-West Shrine Bowl, the All-Star game and the Coaches All-American game.

The Indiana native was selected in the 3rd round of the NFL draft by Coach Norm Van Brocklin of the Minnesota Vikings, playing there 1966-67. At the end of the '67 season Hansen decided to leave the NFL and partner with a relative in a business venture in his hometown of Evansville. When Van Brocklin took over as head coach of the Falcons in 1968, Hansen called the coach and asked for a job. The new Falcons coach said, “Sure, I would be glad to have you as a Falcon, but you will have to start a week earlier for rookie camp since you have been out of football for a season.”

Just going to work in the NFL

Hansen came to Atlanta and played seven years for the Falcons before a brief stint with the Seattle Seahawks. His career ultimately ended with the Green Bay Packers in 1977.

Hansen said, “In my first year with the Vikings, the team was boarding a plane to play an away game, the fifth game of the season. John Kirby had been the starting linebacker, but was out because of an injury. I was selected to take his place and so it was my first starting role with the Vikings.

“The first team sat in the first class section of the airplane. So, I thought since I was in a starting position for the game I could sit in first class with the other starters. When Coach Van Brocklin saw me sitting in first class he shouted, ‘Get your in the back of the plane!’ I didn’t know rookie starters were not accorded the same benefits as the veteran starters.”

Hansen explained, “I looked at my career as a professional football player as a job, not as an honor. I was just a well-paid laborer. I never got caught up in the fame of the game, nor did I think of myself as any kind of celebrity.

“I played in 142 games in the NFL, but I played cheap, hurt (he had 15 knee surgeries), basically kept my mouth shut, and did what they told me.

“But I learned a lot from the game. I learned that hard work and sacrifice would lead to success. I learned that in order to achieve your goals you must have teamwork. And, you must rise to the demands or be eliminated.”

When asked, “Who was the most difficult person to tackle you ever had to face?” Hansen said, “Larry Csonka of the Miami Dolphins was extremely hard to tackle. I would hit him and holler for help.” Csonka was a punishing runner who took the Dolphins to an undefeated season in 1972 and two Super Bowls. 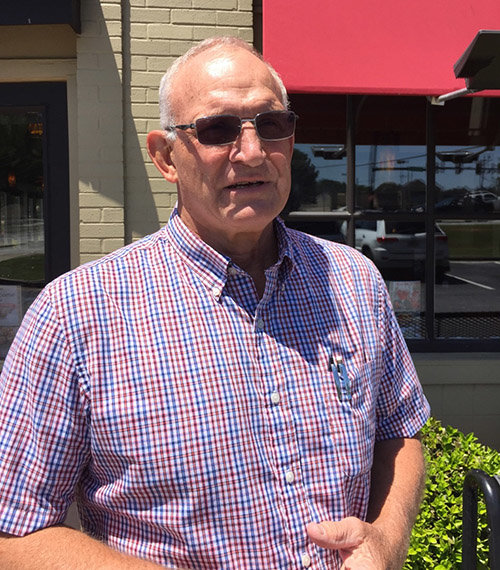 Starting, then being saved in, team chapel

Primarily, Hansen is a devout Christian who came to know the Lord as a player in the National Football League. He was confirmed in the Lutheran Church at age twelve, but regarded that as more of a formality than a real heart change.

Hansen asked Coach Van Brocklin if he would allow the players to have worship services for the team. The coach indicated that if a majority of the players voted to do so, he would permit it. When the issue was put to a vote, the majority was favorable to the idea.

For the past 30 years Don and Sandy Hansen have been active members of Annistown Road Baptist Church. Their fellow church members praise the Lord for their faithfulness and have described Don as a humble, generous, devoted servant of the Lord Jesus Christ.