Left to right Steve Reach, Dan Grader, Laura Nightengale, and Larry Davis split and move wood into the "wood corral" at Antioch Baptist Church in Blairsville. The church has provided wood to those in need for the last nine years. DUANE MANDERS/ABC
Posted Thursday, January 4, 2018 11:35 am
Scott Barkley

Left to right Steve Reach, Dan Grader, Laura Nightengale, and Larry Davis split and move wood into the "wood corral" at Antioch Baptist Church in Blairsville. The church has provided wood to those in need for the last nine years. DUANE MANDERS/ABC

BLAIRSVILLE — Many church ministries depend on year-round involvement for volunteers in preparation of specific seasons of need. At Antioch Baptist, one ministry in particular plays that role. And during the current cold snap, it's been more important than ever.

Around nine years ago, says Paul Clark, a small group of men began splitting wood and storing it in the church parking lot. As one would expect, winter arrives a little earlier and lingers a little longer in the mountains than other parts of the Peach State. And even though electrical and gas heat are certainly used, many still utilize woodburning fireplaces and stoves.

That, along with the desire to let the wood season for up to a year, makes the ministry a constant conduit between the church and community. When someone needs a downed tree removed, they know where to take it. And when temperatures drop, others know where to go if they're low on money for firewood.

Growth in need and supply

"We have a dedicated core group," attests Clark, who coordinates the ministry. "After a few years we decided to build something to keep the wood dry and not let it mildew at the bottom of the pile." 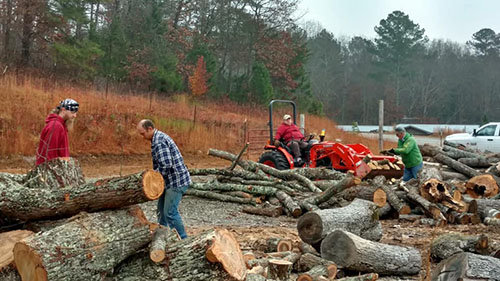 At far left Nick Cline – whose father, George, serves as pastor of Antioch Baptist in Blairsville – joins others on a Dec. 2 work day in sawing wood donated to the church for splitting. Beside Cline, Tim Nightengale operates a chainsaw (not seen) while Men's Ministry coordinator Paul Clark loads wood with a tractor as Gary Cook, a deacon, assists. DUANE MANDERS/ABC[/caption]

As a result, the wood now stays in a "wood corral" at the church. At 36 feet wide and 24 feet deep, the wood piled about 12 feet high helps a lot in an area where temperatures have struggled to get above freezing this week. Tuesday's low plunged to 5 degrees, which tied a record set in 1977.

Over the years members of other churches and denominations have joined, most notable from First United Methodist. Clark credits a particularly large chainsaw owned and operated by a member of Lutheran church in helping the ministry.

"Our group feels good about doing this and we have a good camaraderie," he explains.

"People are very appreciative," he adds. "Some ongoing relationships start from it with people becoming regular attenders [at Antioch].

"It was three degrees here Monday morning. A lot of people around here still use woodburning fireplaces as their only source of heat."

For that reason, Clark and others know that sometimes schedules have to be adjusted. Are there concerns some may take undue advantage of the ministry? Sure. But leaders leave that determination to another Judge.

"We don't pick and choose who gets it," says Manders. "If people are getting it and don't need it, we let God work that out."

On a Dec. 2 workday Manders and others, such as his son Reece, below, joined in building up the wood supply.

Although it's not unusual for axes to make an appearance, the ministry makes use of a splitter to replenish its supply.

"One of our members, Windle Carr, died in 2011 and we dedicated an iron-and-oak splitter to him," Clark tells. "We've been using it ever since. Quite a few people donated money in his name to help us buy it.

"To God be the glory, because it's holding up well."

As for where the wood comes from, Maunders credits a series of storms the last year for providing a lot of downed trees. Another local tree-cutting businessman donates every now and then as well.

"From the time we began, we've never had a shortage of available wood to split," says Clark. "God has really blessed our needs.

Moments later, Clark cuts the interview short. He had to "run down to the corral," he explained apologetically, to meet someone else in need of heat.

"It's a joy when people tell us 'thank you' and it's from the bottom of their heart when they leave here with wood," he says quickly before hanging up.

"If they call and say they really need some, we'll load 'em up."