VALDOSTA — We live in a postmodern age that values pluralism, the experiential, relativity, diversity, creativity, globalism, and environmentalism. Many wonder if the church can survive in this cultural milieu.

While most churches struggle in this postmodern age some congregations thrive. The key to not just maintaining the status quo, but experiencing spiritual and numerical growth, is leadership and followship.

When churches have loving pastors who are filled with the Spirit, who preach the undiluted Gospel without fear or favor, and possess an indomitable work ethic, those churches typically not only survive, but thrive.

In 2013 Robby Foster became the pastor of Northside Baptist Church. And since his arrival in Valdosta, the church has taken on new life.

Bill Middleton, a member at Northside since 1960, explained, “Pastor Robby came to our church when we were at a low ebb and God used him to energize our church. I can’t tell you what he means to our church. He loves the Lord and he loves the people. That has translated into the people loving each other.”

Northside Baptist Church in Valdosta found in Robby Foster a leader they could follow, and God has been moving significantly in the church since Foster arrived nearly four years ago. 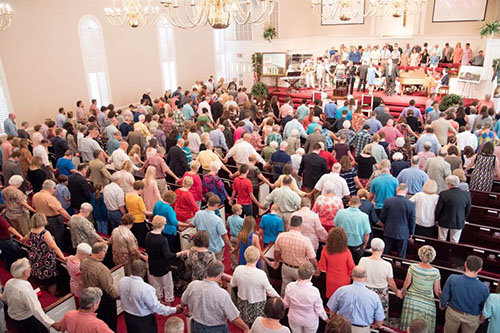 A large crowd stretches across the worship center at Northside Baptist, holding hands on the occasion of the 65th anniversary of the church’s founding. NBC/Special[/caption]

Sally Burkhalter, Foster’s administrative assistant and financial secretary, commented, “Jesus Christ is unequivocally the head of this church and He is working through the human instrument of Dr. Foster, our senior pastor. He is without question a spirit-filled, anointed-of-God, passionate, inspirational preacher and a gifted and personable pastor to all.

“We also have a firm foundation of median and senior adults who have been committed to the success of Northside through thick and thin.”

Burkhalter also cited the church’s outreach ministry as being key to the its growth. She stated, “Fighting the good fight of faith through committed, ongoing regular outreach/home visits and contacting those who have stepped onto our property – including visitors to our Sunday services, Sunday School, and to ministries like Awana, Upward Basketball, etc. – has enlivened our church.”

Honoring the past, building for the future

In the past three years Northside has experienced unprecedented growth, baptizing 259 new believers and receiving an additional 308 new members into the fellowship. Northside has also experienced a 45-percent increase in Sunday School attendance. 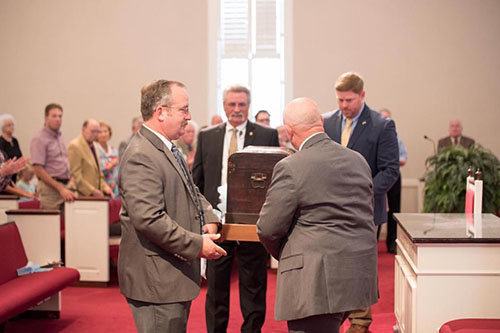 Four men carry out the chest containing the $87,000 First Fruits Offering for the expansion of the worship center at Northside Baptist in Valdosta. NBC/SPecial

On Sunday, June 4, the church celebrated three special events: homecoming, the 65th anniversary of the church’s founding, and the groundbreaking for the expansion of the worship center.

Wallace Greene, a member of Northside for 47 years, commented, “Years ago there was a group that gathered to build a larger sanctuary than the one originally constructed. They were thinking of the future growth of the church. On Sunday we demonstrated that we were looking to the future by breaking ground to enlarge our sanctuary.”

Greene continued, “The people were packed into our sanctuary for worship on Sunday and the service was videoed for the overflow crowd in the chapel and I understand it was packed as well.” (There were 738 present for worship on June 4).

“One of the reasons our church is growing is because of our pastor. Brother Foster is a very good preacher. He is always well prepared. He gives us the Word of God and doesn’t chase rabbits. I love the guy.

“When my wife, Wanda, died two years ago, the pastor was a great source of comfort to me. He was there for me during that time. He is as good outside the pulpit as he is in the pulpit.”

Greene concluded, “Pastor Robby has been instrumental in revitalizing our church, but he wouldn’t take credit for any of the successes we are enjoying in our fellowship. He gives all the glory to God.”

According the The Valdosta Daily Times, Lowndes County’s population, currently at 109,000, should grow to 149,000 by 2040. Northside’s long-range planning group carefully measured the church’s growth pattern over the past three years and the projected population growth for the Valdosta/Lowndes County area and recommended to the church the expansion plan. 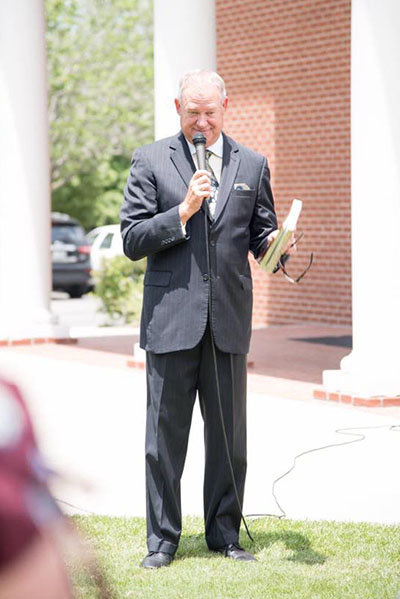 Pastor Robby Foster prays at the groundbreaking service after the homecoming/anniversary meal at Northside Baptist Church. Foster arrived at the south Georgia congregation in 2013. NBC/Special

The church body unanimously voted in approval of the $2.5 million proposal in March. They further demonstrated their support by presenting their First Fruits offerings of nearly $87,000 and pledges totaling $1.1 million during the Homecoming Celebration service on June 4. All of that is in addition to the $250,000 the church had already saved for the expansion.

The additional space will create a 1,200-seat sanctuary, a glass walk-around atrium with two-sided access to the sanctuary, a 92-seat choir and orchestra area, as well as new pews, sound system, lighting, and interior design elements.

Construction on the project should begin soon with the projected completion date in March 2018. Northside deacon Chase Gregory of Studio 8 prepared the architectural design of the project and (deacon) Chuck Smith and Son Construction will complete the work on the new facilities.

Foster has taught the church to “Live with purpose, leave a legacy.” His message is there is a ministry for everyone. The goal is to equip the body of Christ to grow in their relationship with the Lord and the gifts the Lord has given them and develop a passion to reach out to those who need to hear the Gospel of Jesus Christ.

And it is all working.