P. J. Kunst: an example of brains and brawn

P. J. and the family pet Veda – a full-blooded boxer – and his sister Gracie pose with their parents Penny and Paul in a not-so-formal outdoor setting. KUNST/Special
Posted Friday, July 27, 2018 3:29 pm
Gerald Harris

P. J. and the family pet Veda – a full-blooded boxer – and his sister Gracie pose with their parents Penny and Paul in a not-so-formal outdoor setting. KUNST/Special[/caption] YATESVILLE – If you measure summer by the days our children and youth are out of school, the season is almost over. It has been spent like a tale that is told. If you shop at Walmart you will find that school supplies are selling like snow cones in Valdosta on a hot, sultry day. High school football teams are going through their two-a-day workouts. Teachers are taking their last respite before the bell rings to initiate the 2018-2019 school year. P. J. Kunst is already thoroughly submerged in football practice at Lamar County High School in Barnesville; and even though he is a rising sophomore and only 15-years old, he is six feet and five inches tall and wears size 17 shoes. In his football uniform his size is intimidating and he should make a significant impact in the Panthers offensive line as one of their tackles. He got a considerable amount of playing time last year as a freshman. 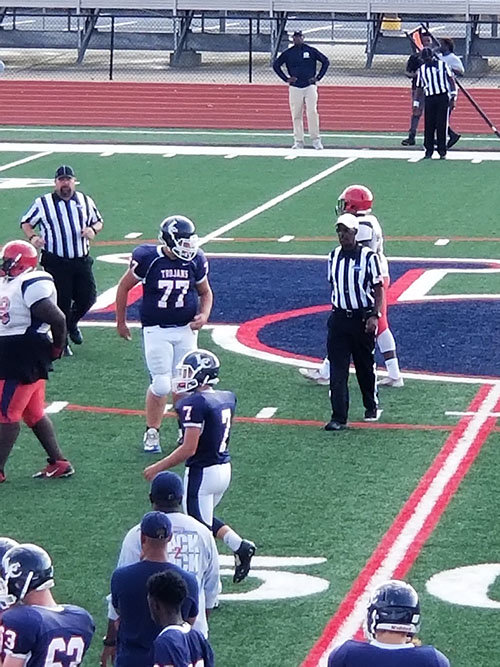 P. J. Kunst, number 77, returning to the Lamar County Trojan line of scrimmage after running an offensive play. KUNST/Special
Penny Kunst, P. J.’s mom, stated, “Lamar County’s football coach told my husband and me that P. J. would be able to pick where he wants to play in college football. He is a great kid; and has a wonderful personality. People seem to be drawn to him.” This gentle giant gave his testimony at revival services at Antioch Baptist Church in Yatesville recently and what he said was brief, but powerful. He had just returned from the Fuge Camp at Ridgecrest in western North Carolina and was reflecting on what he learned from his experience at camp. He explained, “We learned a lot about trust and forgiveness. If you want God’s forgiveness you have to stop doing the things for which you are asking forgiveness.” P. J. understands that forgiveness is contingent upon our repentance and willingness to walk with God. At the camp he also learned about the spiritual needs in other parts of the world and mentioned Asia in particular. He added, “It is sad, but there are a lot of people in America that don’t know or care about Jesus Christ.” In reflecting on his own spiritual journey he admitted that he prayed the sinner’s prayer when he was in the first grade, but added, “When I told our pastor, Brother Jeff Morgan, he asked me some questions and I must not have provided the correct answers, so he suggested that I not be baptized at that time. I was baptized about six months later. “ However, when I was in the 7thgrade, we had a revival at our church. That is when I truly became a Christian. I had my eyes opened to who Jesus really is, how He died for us and forgave us for every sin we have committed. 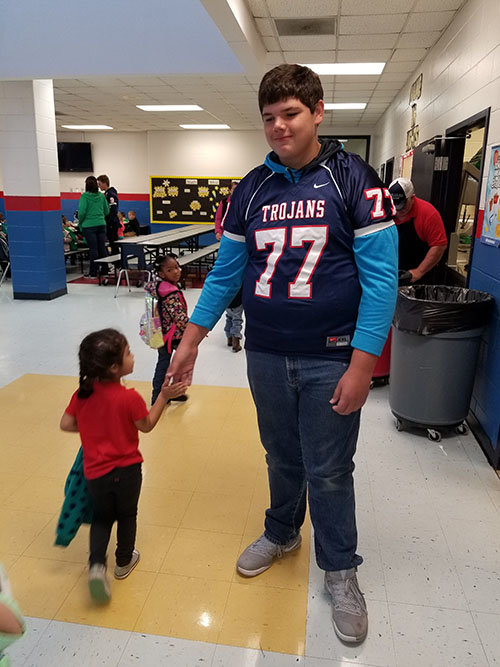 On Fridays the football coach takes the players that have weightlifting 1st period to the Primary and elementary schools to talk to the children at breakfast times.
P. J. Kunst interacting with a pre-K child on a Friday morning. KUNST/Special
“My mom has told me and my sister on many occasions that one day we will all have to stand before God and He’s going to ask us why we did this or that and we are going to have to answer for anything that is not forgiven. “She has said that when you reach the age of accountability that you have to make a choice. You know right from wrong so when you stand before the Lord you cannot make excuses or blame others for your sins, you must know that your sins are forgiven by Jesus.” P. J.’s pastor remarked, “P. J. loves life and loves people. He makes friends easily and loves his parents and sister. I jokingly tell him that he is our youth pastor’s brother, because they love to hang out together. He is a fine, intelligent young man who is growing in Christ. He is a blessing.” Although P. J. is on the high school football team, there is almost no limit to his interests. He enjoys anything that has to do with racing and driving anything that has a motor. He commented, “I love jet skiing; and we go to the lake every chance we get. I just got my learner’s permit about a month ago, because I did not become 15 until June 25th.  I am also in Boy Scouts and working on my Star ranking right now.” P. J. is also on the high school wrestling team. Last year he won two matches and lost two matches. He explained, “I only had four matches, because it is difficult to find someone in my weight range.” 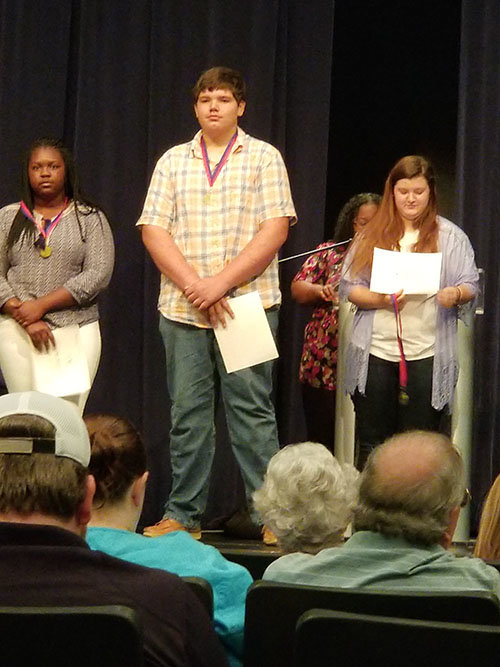 P. J. standing on the stage at Lamar County High School on Honors Day this past May. KUNST/Special
As Pastor Jeff Morgan has already explained, P. J. is intelligent. He has a 3.75 grade point average; and his favorite subjects in school are math and physical science. He stated, “My plan right now is to become a surgeon (my pathway is in health) or maybe an engineer. I realize that those two fields are extremely different, but both are possibilities.” P. J. has an imposing presence, because of his hulking size. But he recognizes that his strength comes from the Lord. His favorite Bible verse is: “I can do all things through Christ, who gives me strength.” If I had to use some adjectives to describe P. J. Kunst they would be: winsome, handsome, wholesome and awesome. We have students like that all throughout the state. We need more. We can win and gain them if we take our emphasis on reaching the next generation seriously.