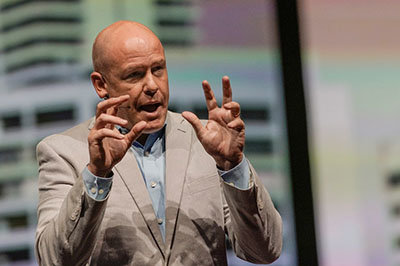 BIRMINGHAM, Ala. (BP) — Attendees of this year's Southern Baptist Convention Pastors' Conference won't just hear about the conference's "Kingdom character" theme. They'll learn how it's personally lived out as well.

Jimmy Scroggins, pastor of Family Church in West Palm Beach, Fla., preaches during the afternoon session of the 2016 Pastors' Conference in St. Louis. Scroggins will preach in the final session of this year's conference in Birmingham. BILL BANGHAM/Baptist Press

"We as a convention, and really Christian ministries in general, have had some real struggles with some character issues," said Wood, pastor of Shades Mountain Baptist Church in Birmingham. "We want this to be a needed reminder to all of us about the character of Christ-followers, because we know our conduct grows out of our character."

Evangelists Jay and Katherine Wolf will address what it means to be "poor in spirit," based on their experience of Katherine's massive 2008 stroke and subsequent paralysis. Ed Litton, pastor of Redemption Church in Mobile, Ala., will preach on "blessed are those who mourn," drawing from the experiences he and his wife Kathy each have of losing their first spouses in fatal car accidents.

Other speakers include British pastor Martin Young ("blessed are the merciful"), who oversees a network of mercy ministries; Atlanta pastor and North American Mission Board vice president Dhati Lewis ("blessed are the peacemakers"), who has helped lead Southern Baptists in racial reconciliation; and Pastor Andrew Brunson ("blessed are those who are persecuted because of righteousness"), who was imprisoned for two years in Turkey on charges of terrorism and espionage.

"I prayed through and was looking for men whose lives emulated those particular Beatitudes," Wood said.

Along with preaching, the Pastors' Conference will feature worship and prayer to undergird the ministry of pastors and their wives. The sessions at the Birmingham-Jefferson Convention Complex will be held prior to the SBC's June 11-12 annual meeting there.

Additionally, the conference will include two roundtable discussions.

A roundtable on racial reconciliation will feature discussion of how Birmingham churches helped foster healing in the city after police shot and killed an African American man at a local mall last Thanksgiving, sparking racial tension. The discussion also will note the importance of building friendships across ethnic lines and being a peacemaker when the racial diversity of a church increases.

A roundtable on persecution will feature, among other participants, Brunson; authors and missionaries Nik and Ruth Ripkin; and Colorado baker Jack Phillips, who won a U.S. Supreme Court case after the state of Colorado attempted to force him to bake cakes for same-sex weddings.

Monday afternoon (1:30-4 p.m.) speakers will include Ben Mandrell, pastor of Storyline Fellowship in Denver; and Lewis, lead pastor of Blueprint Church in Atlanta.

Each Pastors' Conference attendee will receive a book approximately 100 pages long containing the conference program and stories of nine individuals "whose lives emulate each one of those Beatitudes," Wood said. The conference offering will go to Christian Service Mission in Birmingham, a ministry that connects resources with people in need.

The Pastors' Conference is free and requires no registration. To learn more about this year's schedule, sponsors and theme, visit sbcpc.net. You can also access information about the conference on Facebook and Twitter.

Child care for children ages birth through 12 years will be offered during all Pastors' Conference sessions. Children ages 4-12 may register for a conference provided by Children's Conferences International at www.childrensconferences.com.